A much more leisurely 7am alarm woke me this morning. I left the house by 7.30 and headed to Cleveland Angling Centre to buy maggots. I got there about 8.30 and was going to wait for its opening at 9am. I peered in the window and then a masked man exited the shop. Oh, it's open I thought as I went in. It's open from 8am even though website says 9am, a bit annoyed I was not here 30 mins earlier was soon eased by the thought of a more leisurely day.

I bought 2 pints of maggots, a tub of worms, 4 packets of drennan run rings so Ellis and I have plenty for the winter chub fishing and a new landing net handle. I had seen the one Keith had yesterday and he told me it was from this shop.
£30, just like that and I was soon on my way.

I was fishing a club section of the Tees that I have fished a few times. Always going in the same swim and really getting to know the run of the water and the lay of the land, or so I thought. It, of course changes every time and I am always trying new things and enjoying new difficulties. Today the water was up quite a bit than before and very clear. The wind was also quite troublesome when casting and trotting. I persevered though and caught some fish, but let's start at the beginning.

A few pouchfulls of maggots was fired in whilst I set up.


I opted for a chubber style float with 4SSG and a micro swivel as a dropper between the main line and the hook link. Size 16 hook to 3lb link coupled with 4lb line on the closed faced reel. All connected to a 13ft float rod and that is me, "specifications" over load!!

First cast and trot through, I got snagged on the snag that I know is there!! Hooklink snapped and quickly replaced. Second trot through and the float dipped. I missed the bite but at least they were still here. A few trots followed and eventually I was into a fish. It felt a good one and my new landing net pole was christened. A lovely perch the first fish of the day. 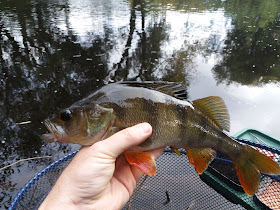 I was thinking of weighing this Perch so I slipped him into the keep net for later. I was soon back into the rhythm of feeding and casting, although the wind meant I was feeding alot of the river and occasionally the bank too!
I was soon catching small chublets regularly and getting alot of bites. As I played one to hand, I saw a splash in front of me. Thinking It was a fish, I was ready to cast to it next trot through. It was however an otter, great to see it swimming about, not so great in my swim. It swam to the far bank and disappeared into the bank side vegetation. I fed more and soon was catching again.

I was watching my float down the swim when suddenly about 25 fish erupted from the water in front of me. They all jumped clear of the water and fled the area I had been feeding. I assume a Pike had come to catch some fish too.
Next trot down out the corner of my eye, I saw a large white bird swooping across the river. A barn Owl, out and about at 11am, must have had a busy night! It flew up to a tree, hopped across some branches and was soon out of sight. 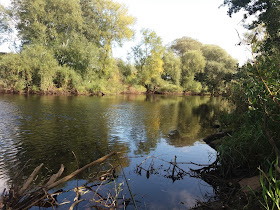 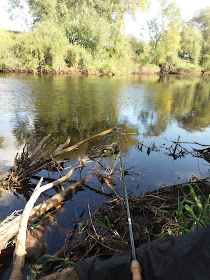 The sun shone and the river looked idealyic. I had seen wildlife and caught fish, I was happy.
I occassionaly swapped to worm on the hook and caught a greedy little chublet on a worm that was probably as long as it was!
As I sat and had my lunch, I kept firing maggots into the swim to keep the fish feeding. I thought it was only fair as I was also stuffing my face!!

A few trots later and I decide it was time to change to a worm. The float went under and I struck. Solid resistance. Using the back wind I was soon playing a much better fish. It was upstream, over the far bank. Everywhere I wasn't. It found a snag downstream and I could still feel the fish on even though the line was stuck on a snag. As I had chest waders on, I scurried down the edge of the river, over rocks and through the water. I went about 15 metres further down stream and was above the fish. The line angle now changed and the fish swam away from the snag. Again it was over at the far bank. I continued to play it carefully, back winding to allow it some space. Soon it surfaced and I saw the big mouth. I thought it was a chub. Then I saw it properly, it was a big Perch. It was now ready for the net and I slipped it easily into it. I whooped with joy.  I clambered back along the bank to my swim.
A quick weigh confirmed it as a new Pb at 1lb 6oz, a few pics and it was slipped into the keep net. 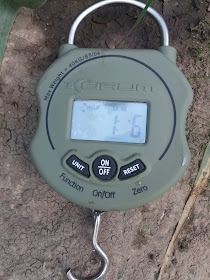 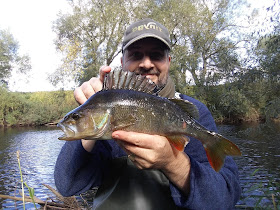 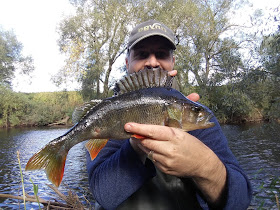 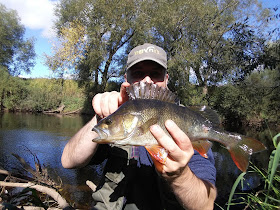 I carried on fishing but caught no more fish. It suddenly died, not a thing. I fed the same areas and trotted the float but no bites. Happy with my catch, I had one last look at the fish and released them back in the water. Two Perch and ten Chublets, I never did weigh the "small" Perch! I dried my keep net in the sun as I slowly packed everything away.


As I left, I noticed a fellow club member on the opposite bank. We had a great socially distanced (across a river) chat and I wished him well as I headed back to the car.

Regularly readers may remember I had a 2020 Target of a 1lb 8oz Perch. I have caught 2 perch this year which were new personal bests at 1lb 2oz and now 1lb 6oz. I am so close to ticking that target off. But, do you know what? I am not going to!  I am going to carry on trying for a larger Perch.
I had alot of fun today and hopefully I will be able to share a larger Perch with you soon. If I don't manage it, know that I will still be here, I will have enjoyed trying and I will still be blogging!