Date fished 17/4/2022
12.30 pm until 18.00
Adam, chapter 4, verse 3. On the third day, he went to the lake again!
With no other plans, I decided I would complete the hatrick and go back to the lake. An afternoon session this time, still targeting those slabs. Not the concrete ones like yesterday, the bream flavoured ones.
Since my first trip to Tilcon when I used my pole, nearly every other trip I have used a feeder. Today I took the float rod and some wagglers, I was going to see if I could catch my first ever proper bream on the float, (of course the ledger rod came too). 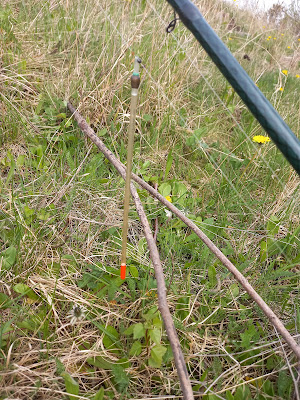 Picking a swim I had never fished before was ambitious, especially as I slipped on my way down to it and broke a step. One for me to repair next work party! 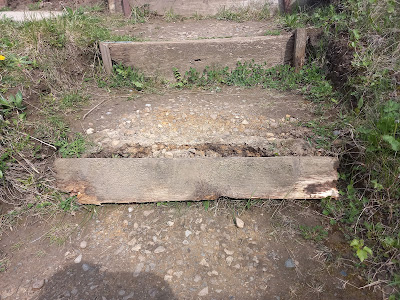 I set up the ledger as a sleeper rod and concentrated on the float. Worm on the hook, I fed pellets about a rod length out against a bush. It was warm enough for shorts, but there was a steady breeze, creating a chop on the water. It was not blowing constantly and when it stopped, the lake was like glass. Quite a contrast.
After an hour of feeding and casting my first bite. A little Perch to deny the blank.
As I fished on it was a Perch a chuck, all on worm. Some small, some bigger. About 25 in all and certainly kept me busy with a smile on my face on the float rod. 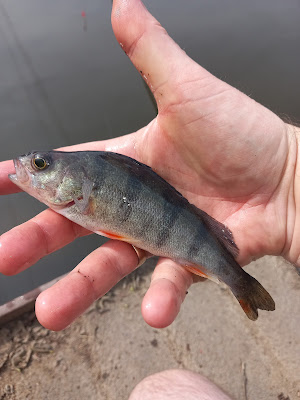 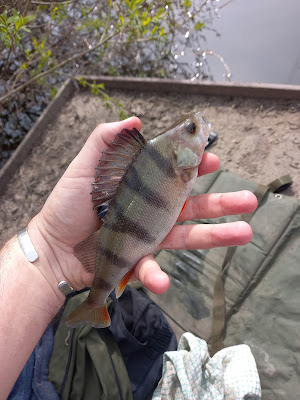 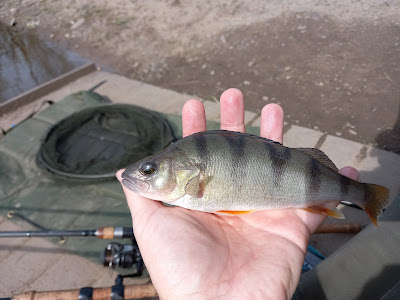 I kept up the feeding and was nearly out of worms. The float dipped and I struck, this time resistance and the fish pulled back. A good fight on the float rod and I had succeeded. A bream of between two to three pounds lay in the net!

The wind picked up and with no worms left, I put the feeder against the bush and did some close in ledgering to see if any more bream were down there. There was, another fish similar to the first but this time falling to pellet. 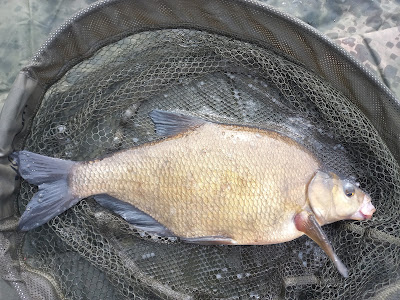 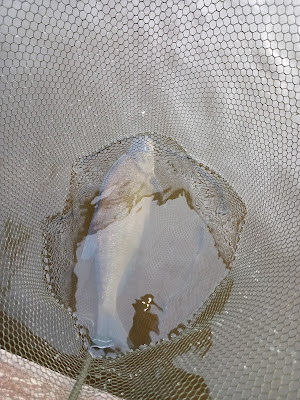 I carried on feeding and the fish were definitely feeding as line bites gave them away. Another member was walking his dog and we had a chat. As we did, the rod started pulling and another bream was on. We saw it come to the top, it was bigger than the first two and I played it towards the bank. Like with everything when you are being watched, you just can't do it the same and the bream came off!
"You can blame me for that" said the other angler and off he went.
I cast straight back out and within minutes the rod went again. I was better now and a larger fish lay in the net. No blame there! 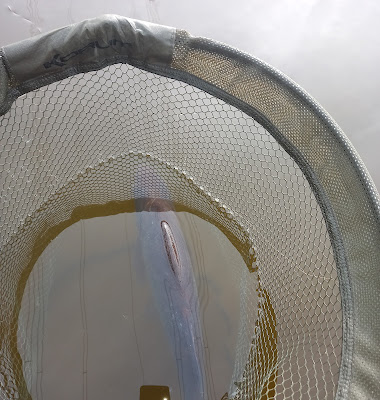 This looked much bigger and deserved a number. 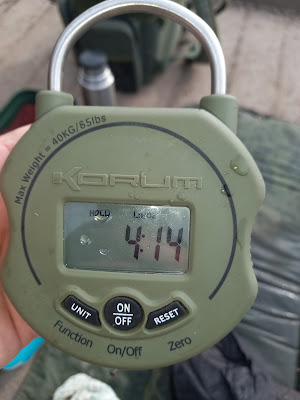 My previous pb was 4lb 13oz. Gotta love these digital scales when your pb is going up an ounce at a time!!

Sure of more fish, I fished on. The rod gave a huge tap and line started to come off the spool. Novices will think this is a big fish, but experience tells me, its usually a tiddler.
A small but perfectly formed ide and my first ever, so technically another pb!! 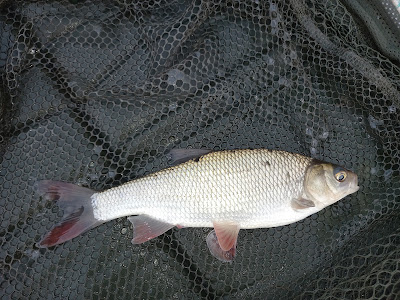 I carried on a little while longer but I wanted to pop and see my friend Ronald. He is moving to Hexham soon, so will be great to catch up. I drove thru and had a celebratory burger and headed home.
Having the lake to myself was great this afternoon and the pb's were amazing. I enjoy the  (social) club aspect too, so will be looking to sort out that step on my next work party.
Maybe there should be a rule where a pb equals cakes!? Will have to see if that catches on, as I tuck into my (frog) chocolate.
Adam C at 19:34:00
Share