I have fished Tilcon 4 times up to now and only blanked once. That was on an evening session, so today I decided to fish another one!
Finishing work at 3pm, I jumped in the car and headed to the lake. I really was enjoying the proximity to home, short, sharp sessions are usually more beneficial during the summer, either an early morning trip or an evening session. Once the rivers open on June 16th, it is likely I will be on them more often so will only be having a few trips on the lake (maybe, weather and Covid dependant). 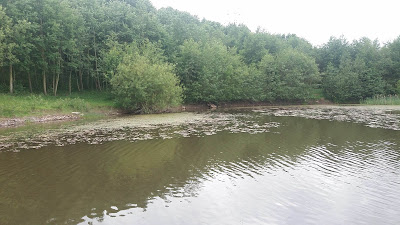 Tom had fished Tilcon earlier in the week and sent me a pic of scales showing 7lb 3oz. It made me jump up in bed! "What a Bream", I thought!!
Fortunately or not depending on your view, it was alas a Carp. Tom was over the moon and it was a great fish. Well done mate! He also caught 2 Bream on that trip. 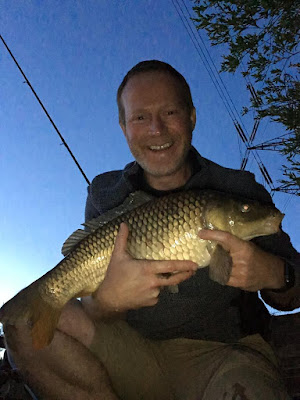 So, back to todays session. The weather had changed. From 21 degrees to 11 in a few hours and I was fishing after early morning persistent rain. The wind was Northerly and about 15mph so it felt a bit chilly, pressure was 1014 mbar. The forecast also said 14% chance of rain, that was indeed 100% inaccurate!!

I had opted for 2 ledger rods, both with Guru Micro lead clips and both with Robin Red pellets (12mm). With my usual green and orange rod rests, this was quite the rainbow! 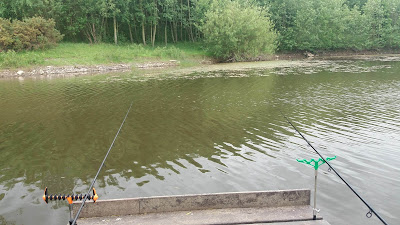 I had misplaced the hook links that I showed you last time, so I had different hook links today. In truth, I packed the wrong ones! I also forgot the phone / bank stick adaptor that I use for selfies on my phone. I only found this out later on the trip! Spoiler alert!! 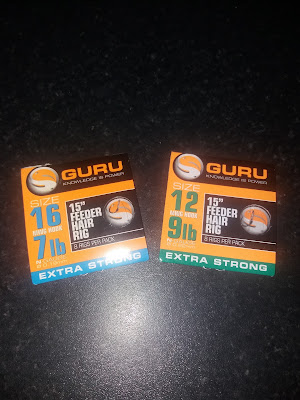 Setting up quickly, I cast to the usual spots and scattered 5 pellets around each. I am not a heavy feeder, and don't think it's always needed. As I sat back in my chair a kingfisher whizzed past one way, then the other.
I watched the swans swim past my line too, easily seeing it and swimming right up to it, ducking their heads and going underneath.
My left hand rod then was away, I saw the line tighten and was onto the fish. I knew straight away that this was not a Bream. It fought really hard, I managed to get it into the open water and played it to the net. Another Tench from this venue and it looked a great fish. 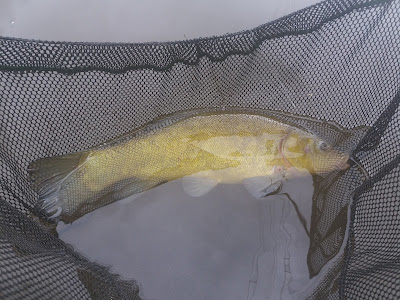 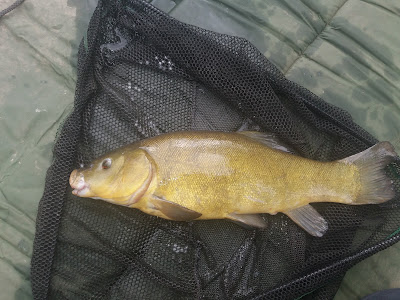 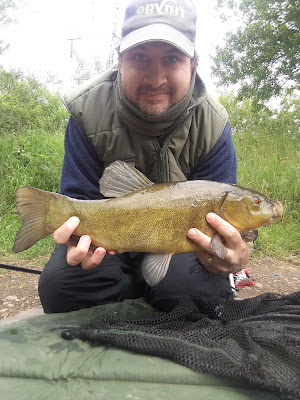 At 63 ounces exactly. I was more than happy. Now, let me tell you about my scales. They are rubbish!! Polite way. I have never been happy with them, but was trying to convince myself that I was. The back does not shut properly and they weigh in 0.1 of a pound. So 3.5 pounds is 3lb 8oz. Which is fine, untill you get some other weights. 0.3 is..... , well it's some ounces. So I do weigh accurately and have other non digital scales, but when I go for the British record, I need to be sure. So I hate these scales! To get over the 0.1 increments of the pound, I weighed in ounces. It just means I need to learn my 16 times table!! So, 63 ounces, 3lb 15oz it was a lovely Tench!!

I cast out both rods again and waited. All that came was the rain. It tipped it down, with wind blowing it sideways across the lake. The wind was also pretty cold too. I huddled down and waited some more. 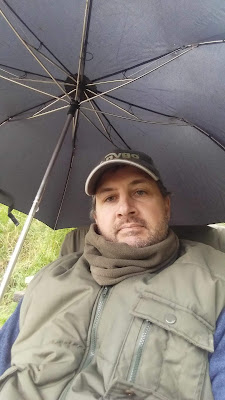 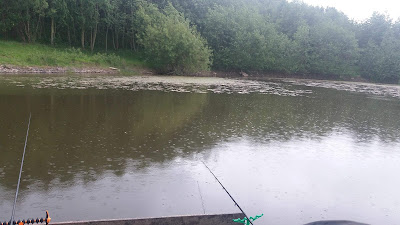 The rain stopped and I watched a green woodpecker fly across the lake and back into the woods, assuming he was going home for dinner I decided to join him. 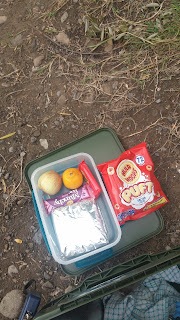 The sun came out too and I started to warm up. 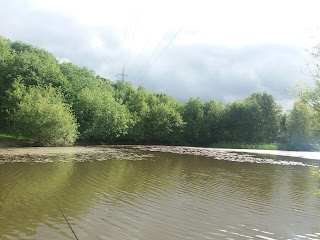 There were plenty of taps, and line bites on both rods but no positive takes. Finally a proper tug on my left hand rod, I struck and felt a fish. As I brought in a small Roach, I saw the line had lassooed around it's tummy and back and the hook was not on the fish, but wrapped on the line, holding it in. I brought it in, unravelled it and let it go back. Not foul hooked as it was not even hooked!!
More rain fell and I had thought about packing up, but with knocks all the time, I thought there was more luck to be had.
Suddenly my left hand rod was away. And I mean away. Usain Bolt style. The rod stayed on the rests but the baitrunner whizzed round like the kingfisher earlier! I picked up the rod and wound down. The inevitable happened and the hooklink snapped, clearly not Extra Strong enough!  It will definitely be the story of the one that got away.

As I sit and fish,  I am always thinking about the blog. What will I write? What will the title be? Today's was going to be about all the colours. But then I thought about my scales, it would be scale related.
"But you lost the big fish, how are you winning"? I hear you ask.
Well, when I sat under the brolly, my phone pinged. An E mail saying I had won on my Investment Bonds. Eagerly I checked the raffle, sure enough, I was a winner. Not millions I'm afraid, but £25. It will definitely buy me a better set of digital scales!!
Posted by Adam C at 23:21:00