Today I fancied a change.  With Ellis busy, I decided to stay local and fish Tilcon for the Bream again.  Leaving the Hybrid feeders in the cupboard I decided to change and fish one rod on a simple safe lead clip system and the other rod was to be fished with a float!! I had wanted to watch a float for a few hours and hopefully see it disappear. 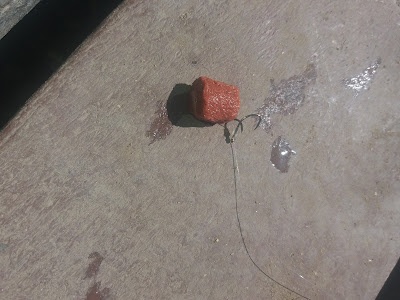 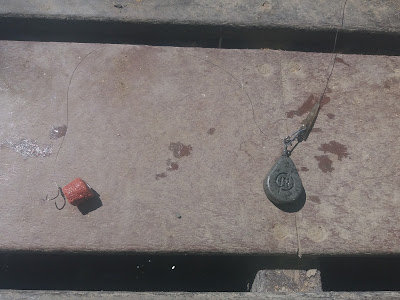 With more hot weather forecast a dawn raid was the decision. Alarm set for 4.40am, I was driving off  by 5am. Arriving, tackling up and fishing by 5.30am. These are the best days!

I decided to change baits too. Opting for robin red pellets in 6mm on a band for the float and 12mm hair rigged on the ledger, instead of Marine Halibut.
I was using a hook length with hair rig stop attachment I had not tried before too! It was a day for changes.


The ledger was cast to the edge of the lillies and I scattered a few pellets over the top. At this time of the morning the lake was alive. Carp crashing through the lillies to my right like earlier in the week, obviously still getting jiggy and plenty of fish showing on the surface.

I set up the float to fish flat on the bottom a couple of rod lengths out. A scattering of 6mm pellets and I was fishing. The hours ticked by, and sitting in the shade of a tree because I had left my cap at home, I must admit I was getting a bit chilly! A few cups of coffee and some movement and things were hotting up.
I missed a couple of quick bites on the float and things were looking promising. A few other anglers joined the party and with Heart FM in the background it was nice to hear people catching, even if I wasn't! 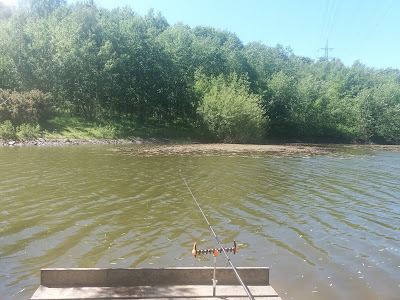 I say the hours ticked by, it was still only just 9.50am. My ledger rod hooped round with a positive bite.  I had already stopped float fishing and the rod was stored behind me, so I was on the ledger rod straight away.
The tell tale 'pull and float' tactic of a Bream was obvious. A lovely Bream coming across the surface to the net first time. As I rested the fish to get the mat ready, I looked at a fin perfect Bream. The fish was angry and tried to swim off with the net! Who says Bream don't fight? This one was a warrior! 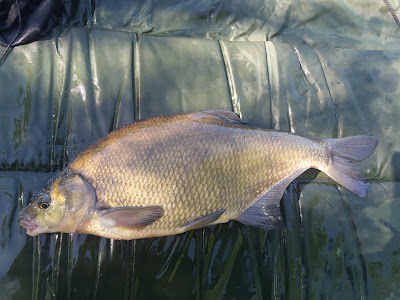 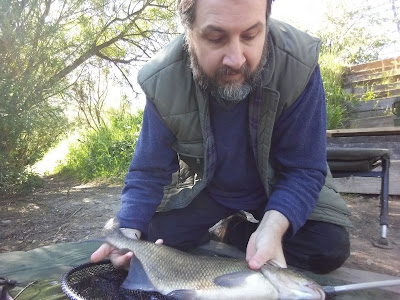 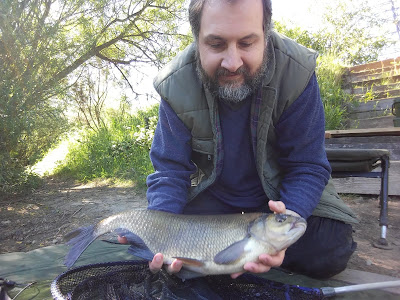 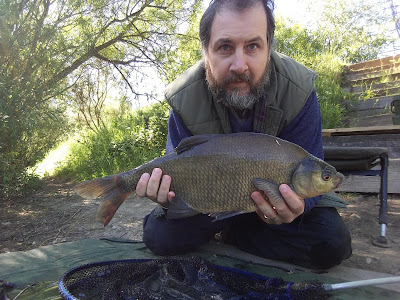 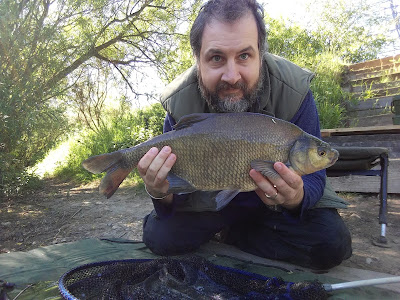 A quick weigh gave me 4lb exactly. I was happy. A few precious photos taken and the Bream was away. I watched it swim down the slope, giving a quick tail flick as it disappeared.

I float fished again for a while, feeding a few pellets each cast but had no more bites on this. I packed it away, will try again with maggots or worms next trip maybe, or in the Autumn.
Sitting behind the ledger rod, the sun got higher and higher until it was threatening to warm my exposed "40 year old man's solar panel".

It was a perfect morning on the bank. I enjoy the buzz of other anglers around me. It makes fishing as social as you want it to be. In these time of social distancing, which we all observed, it was nice to be alone with my thoughts of tackle changes whilst within the comfort of a club.

It was soon time to pack up, with Puff daddy  'I'll be missing you' on Heart to my right,  I felt I was being serenaded and it was an appropriate song to end on.
Posted by Adam C at 05:31:00