The plan today was to drive to Dorset with the kids to stay the week with my parents. I was not planning on setting off until 3pm, so I thought I would spend the morning at Tilcon. It's been a while since I have fished and indeed caught at Tilcon, so today would be telling. I had checked once,twice and thrice,there was not a match planned today!!

An early alarm meant I was parked and fishing by 5.30am. The lake was a touch down on its normal level. Instead of my usual swim, I opted to fish one to its left. Number 9 or "metal pole" as Tom calls it. I had only one rod and Robin Red pellets as bait, it all seemed very sedate.

I set up a simple ledger rig with a guru safety clip, I armed this with a hair rigged pellet and a stringer of pellets on water soluble pva string. I was ready . 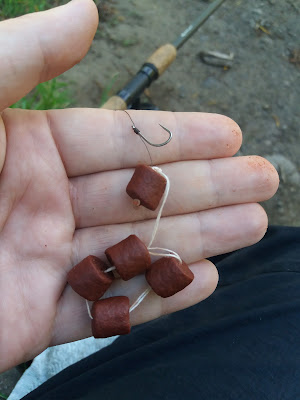 I sat and drank my coffee as fish splashed about around me. The kingfisher must of had a lie in, he didn't fly past until quarter to seven! 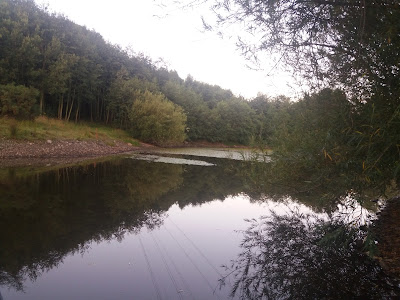 At ten past eight I started to eat my cereal bar, at eleven minutes past the rod tapped. First interest of the day, it must be breakfast time, or so I thought. By thirteen past the rod was stationary again.
As I watched the birds around the lake, a juvenile robin sat next to me looking for food. If I had maggots I would have given him some, I didn't think a 12mm pellet was appropriate!!
A few knocks at about 9am as some other anglers arrived and baited their swims got me sat up. But I was soon sat down again as nothing materialised.

As I had not brought much tackle with me, I was limited as to what I could change. Therefore I kept casting, sitting back and watching the birds around the lake. I think next time I will bring binoculars to do some bird watching or at the very least a good book to read! 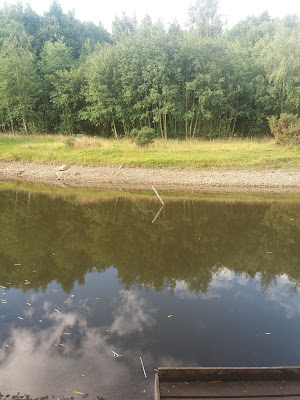