Sometimes you just have to try a new bait. Keep going with it, even if you are not catching and test it to destruction. Today I thought I would do just that. 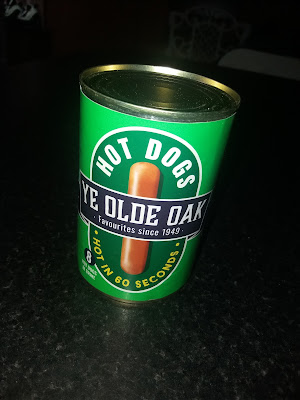 The days are getting shorter now, so a trip can easily consist of dawn and dusk. These are the best times for catching some fish or are they? I have caught plenty of fish in the middle of the day, and as far as I know, no matches except carp (24 plus hour) are fished at the time to catch those crepuscular critters! Anyhow, I do like fishing in autumn and winter when the session can in effect be the whole hours of daylight. Today's trip daylight stats are thus: 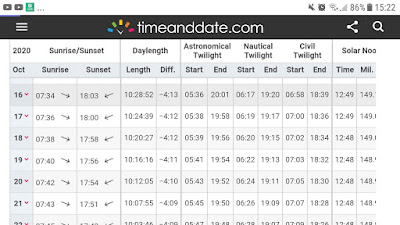 With Ellis working elsewhere in the country, it was down to me to tackle the Swale. I had failed in my last attempt so didn't want a repeat. Did I dare tackle up with the float rod again?!

In short, No! My love affair with catching a proper Chub on the float has not gone away, but its easier to target them with a static bait (in my opinion). Don't worry though, I will catch on the float again, maybe December is the month like last year!

Arriving early, it was still very dark. I tackled up by the car, using the light from the open boot to see the eyes on the rod. It was just getting light as I made my way to the river. I went in the swim where Ellis caught a Chub the other week, was I to be lucky? 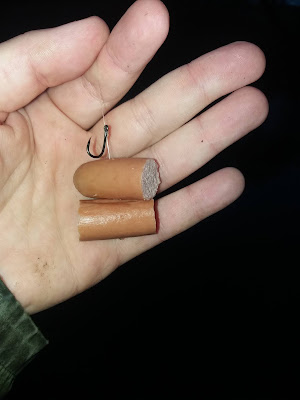 No fish fancied an early breakfast, so as it was now light, I set off down stream. The river was carrying alot of extra water, but it was dropping fast. I stopped in every likely spot, my sausage was dangled in every slack, every crease and within inches of every bush! (Don't start!!) The fish were not interested in sausage.

You can not tell me that there was not a hungry Chub hiding in here???? 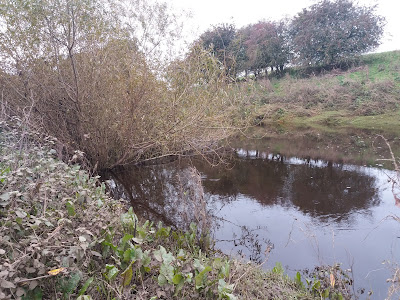 They were not having any of it. I was soon nearly at the bottom of the stretch and (thankfully) out of sausage.
I got to a large bend, the flow goes from right to left as you look at the River but here was a huge eddy and the flow in front was left to right and it snaked it's way across the river. I took off the weight, threaded a large bit of meat on the hair and cast in. I let the line peel off the spool until the bait found a natural hold. I held the rod and watched the line. Suddenly the line began to tighten, I flipped over the bail arm and struck. I was in. I quickly played the fish to the net and as it slipped over the front, I looked at the time. 1201 my phone said. See, dawn and dusk, just like I said!! 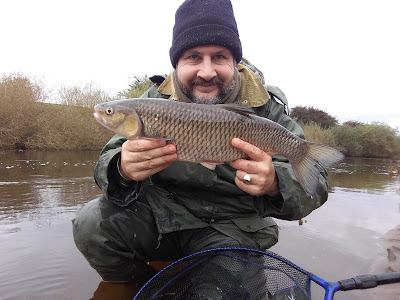 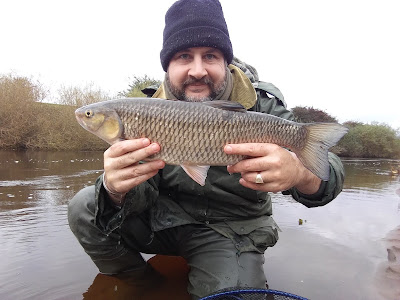 A lovely Chub at 4lb 9oz. Defo not a minnow blank saver! I carried on to the lower limit but caught nothing more so did a 180 and headed back upstream. I was going to walk all the way back, but of course I stopped at the big eddy swim. No Chub this time so I was soon marching on. I walked all the way back to the first swim and stopped here for a rest, in the guise of fishing it again!

The river had dropped over a foot I think. There were sections of the far bank that were covered a few hours ago, clearly visible now. No Chub this time either so I moved on.

I now met a fellow member, so stopped for a socially distanced natter. It turned out that this guy used to live in Ascot where I was born, he also knew one of my old secondary school teachers! What was going to be a quick natter turned into a much longer chat! It was nice to reminisce about all things Berkshire, but soon it was time to move on. I fished one more swim near to the car, but no more fish came to the net.

It was somewhat tough conditions today even though they looked so good. The water was very cold and I can only assume a cold sausage didn't quite cut the mustard. Now there's a thought for next time!.......... 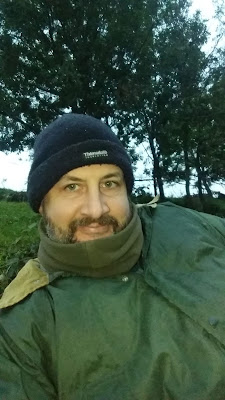