Wye did we blank??

Last week saw me and Davey, you should know who that is by now, visit the River Wye in Herefordshire. 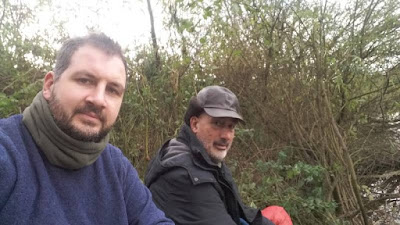 We had prepared with pike gear and barbel gear to spend a day fishing for each. We had been informed by a local guide that conditions were not great. The river was low and clear and fishing poorly.

Unfortunately like most of us, the days we pick to go fishing are the only days we can go. There is no waking up on any particular day and just deciding to fish and no chance to have a quick look at the river and decide to go the next day instead. We were committed so off we went.

I had obtained a guide for the first day so we could get to see the area and have some tips. I don't think guides are cheap, however we had never been there before and thought the expert help would be invaluable. The second day we were to fish on our own. The guide however felt that the conditions were so poor that he could not guide us properly, we were to go it alone!

We met him however, and he took us to the river so we at least knew where to park, where the beat started and ended, all important things that I don't think are always clear from maps, websites etc.

The beat we fished was Goodrich court and actually the info we did have from the Wye and Usk foundation website was good. http://www.wyeuskfoundation.org/fishing/obs/beat_details.php?beat=goodrich
Armed with our pike gear we walked upstream to fish every slack we came across. The river really was low, we could see our bait in most swims which just added to the anticipation of seeing a pike swim in to investigate.  There were many slacks and we were able to sit in most of them together with sardine on one rod and joey mackerel on the other. Before we left our guide passed on some info that I will use in future, cast once, leave for 20 mins, cast again, that second cast may just get the pikes attention, leave for 10 mins, if no takes move on. Never have three casts.

Sadly there was no action in any slacks and by late afternoon it was time to pack up and find our accommodation. After a long drive around as I had put the wrong post code in the sat nav we finally arrived at out Inn, which was a couple of miles from where we had been fishing!!!!

A few pints and food later and it was ready for bed as the morning would bring barbel fishing.

The river had risen about three foot over night and was heavily coloured, every swim on the new beat Lower hill court, http://www.wyeuskfoundation.org/fishing/obs/beat_details.php?beat=lhc looked perfect for barbel, although Davey was still thinking about fishing the slacks for pike!!!

Again we walked the length of the beat and looked for a double swim where we could set the chairs up and get the feeders out. We found a nice looking swim, although a little slippy underfoot, just for Daveys boots though, and we were ready to set up.

Feeders, hair rigs, pellets and stinky paste all made an appearance and we were soon sat behind our rods waiting. I had bought new feeders for this trip and left the larger 3 and 4 oz ones at home as the river was so low and clear. However, this increase in water meant our 2oz feeders were often washed towards the edges. 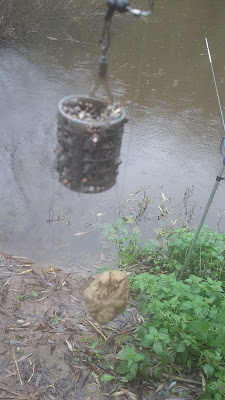 My half of the swim looked perfect, over hanging trees which contained a previous anglers feeder, so I knew I was in the right place.

The day passed with little action unless you count Davey casting, letting go off his rod, it nearly going in the river and then him nearly falling in to retrieve it!!!!

We both enjoyed our two days on the Wye. A double of double blanks but we vowed to try and make it an annual trip and who knows, next time we won't be asking Wye we blanked!