I "cinq" on the canal

5 of us converged onto the Aire and Calder canal for a bit of Perch and Pike fishing. Giles and Rich were Perch fishing with light plastic lures, Dave was Pike fising with Burts, Ellis was doing a mixture of both plus drop shotting and I was dead baiting for Pike. 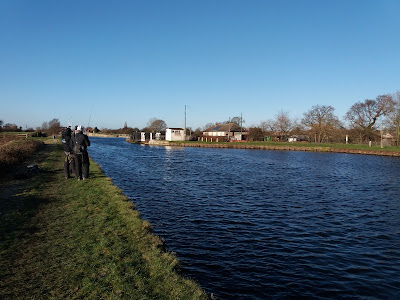 The weather was cold, but all suitably dressed we got to the canal, initially at either end of the section. We worked out our way towards the middle. Giles and Rich working their lures slowly along the bottom were first to catch Perch.

As I walked towards Dave and Ellis I could see the net being used. A lovely looking Pike at 7lb 10oz, it had a good belly on it! Had taken to the Lure.

We all continued our methods, a few follows of the lures and a few more Perch was the reward on this cold day.  Not a sniff on the deadbaits, but I heard laughs, chat and it was a great day to be out! 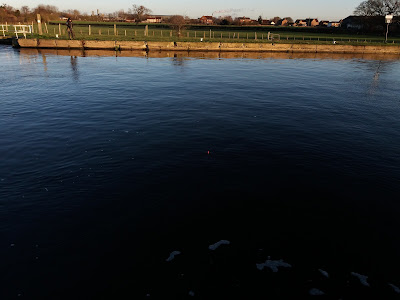 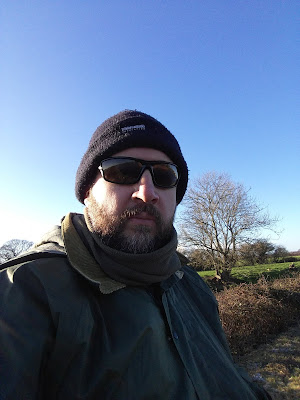 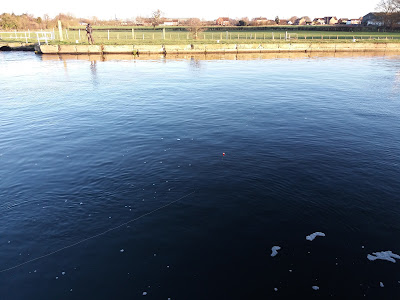 After loosing the Tees Shark last time out, I opted for a go for the Grayling again. I was accompanied by Ellis again, who after seeing the closed face reel and trotting I did last time had bought himself some new kit. He had a 14ft rod and a closed face reel, armed with maggots and chubber floats, we decided to try again. 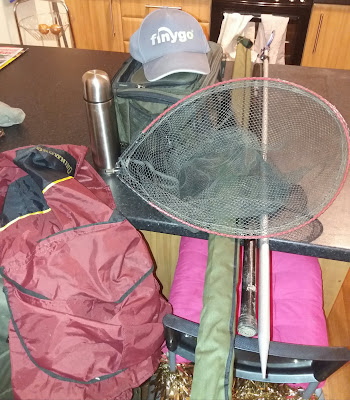 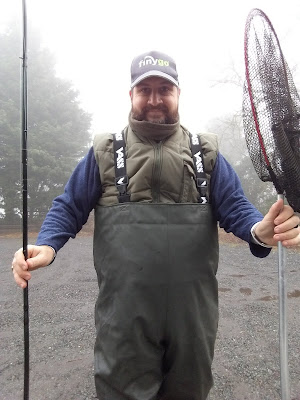 The river was about a foot lower than last time and after a foggy drive I arrived at the spot.
I had Dead maggots, frozen from last time, first time I had used dead maggots,  but they looked OK, seemed to have kept their shape. I will definitely use them again, I always like to have some bait in the freezer.

I was happy to wade alone as I knew the water was shallow from the previous trip, it was however crystal clear and with the Polaroids on, the bottom was like in HD. 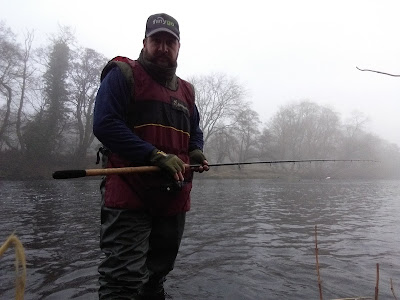 I was happy that I was at least getting bites, striking and hooking them, but a little frustrated that the hooks were coming out. I was using barbless hooks, I wonder if that is affecting it? I know Grayling are very powerful and when hooked seem to be able to go in every direction all at the same time!

Ellis arrived and was eager to christen his new kit, I let him in the swim I was in, while I had a warm drink.
Trotting, bite, in. Landed.
Ellis had a nice Grayling in the net.

We continued Down stream, trying likely swims. Ellis caught a superb brown trout of nearly 3lb, which on light gear had us both "owend" as we took a good 10 mins to land it. It was definitely worth it, it was a cracking fish.
Whilst Ellis recovered and dried his cap, I moved into the swim. Second run through trotting, bite, in. Out!! 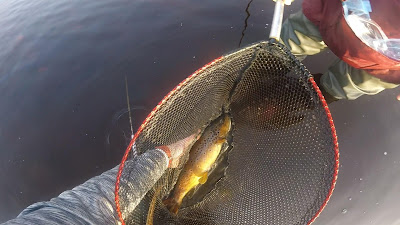 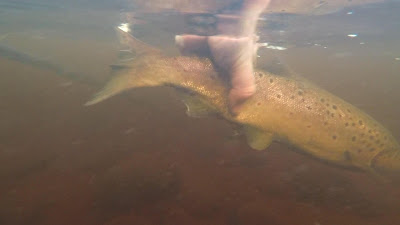 It was starting to feel like it was not going to be my day.  We continued downstream. The sun burnt through the fog and it suddenly felt like it was an autumnal day, it was glorious.

We had made it to a spot where we had caught last time. Trotting, bite,in. Landed! Finally I had caught a lovely looking Grayling that had obviously read Anglers Mail a few weeks ago, where Steve Collett had described holding them as trying to post a feral cat through a letter box! I did manage to get a picture though, just... 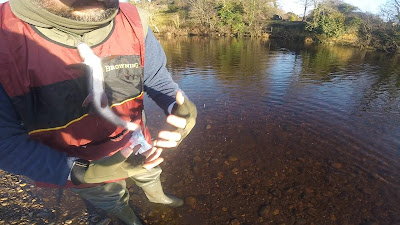 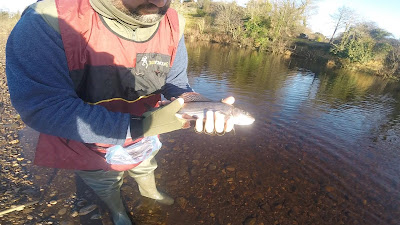 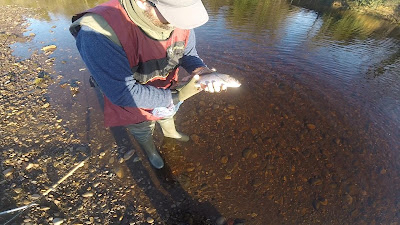 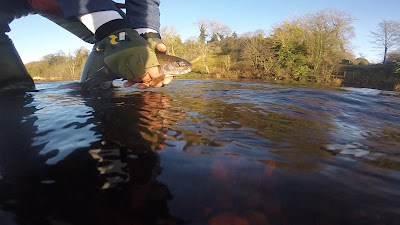 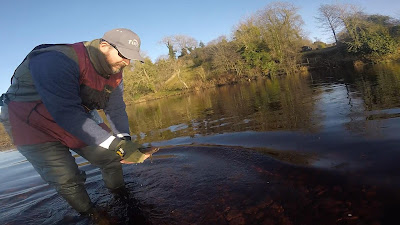 After a minnow each, we headed back upstream. We fished a few other swims and noted some for next time.

With it being panto time, I won't need to go through the chorus a fourth time, but yes it happened. One landed from 5 hook ups, but I drove home happy!

That's how I know I had a great day, by the smiles, not always by the catches, "just as well really", I hear you Say! 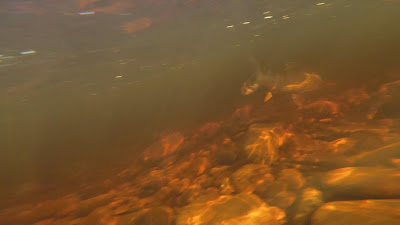 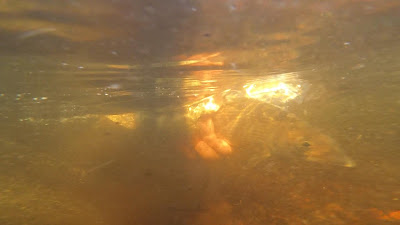 Walking further and getting closer to a Tees Pike

After last week's Grayling success, I decided to continue my quest for a Tees Pike. Having chatted with Dave and Ellis last week, they had given me some confidence to try further along the Stockton waters I fish. I set off with my trusty hike boots and walked the river.

I had one rod, dead baits, net, unhooking mat and a small bag. Was travelling light as usual, eager to try new areas. 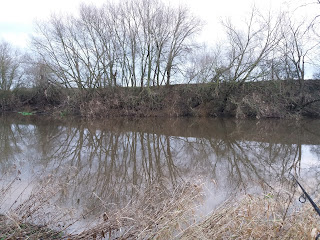 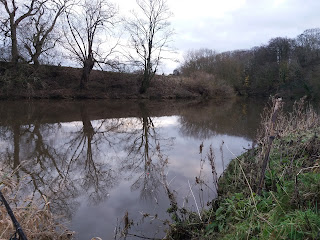 I fished all morning, finding slacks. Nothing. The water was very coloured and cold from the snow melt earlier, in fact it was 7 degrees today so pleasant, but I still saw patches of ice on the grass that had not defrosted yet.

About 11.30, lunch eaten,  I was in a new area, it all looked great for pike. Bait was in, and I sat waiting.
My float, bobbed, rose up. A pike had lifted the bait. I immediately grabbed the rod, wound down and struck. I was in. Steady resistance, the fish swimmng upstream to a tree. I pulled down stream, the fish in the open and ping. The hooks came out!!

I had hooked a Tees Pike but sadly lost it. Now, I say, I had a Pike. How do I know?? My first ever Tees Pike trip ended with a big chub taking my Lamprey.
Well, I can't be 100% sure, but unless there is some sharks in the Tees, something with some pretty sharp teeth grabbed my Sardine. 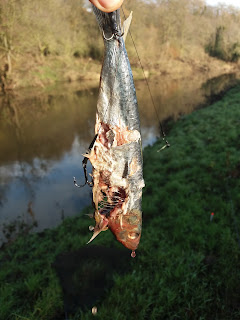 I re-baited and fished on. Nothing. I continued further along the river, trying many other cracking swims. The Pike were not playing along.
I fished till the end of the day with no further bites, I set off for home with a big grin and, happy that I had finally had initial Tees pike contact.

Sadly I have had to say goodbye to an old friend, the Hike boots. Been with me since 2001, travelled the world, and the river banks of the North East. I assume my next trip will require my thermal wellies anyway, and hopefully a Pike or two!! 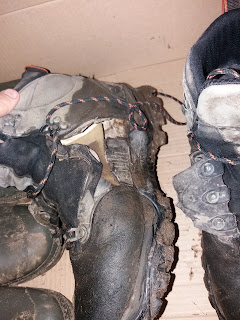 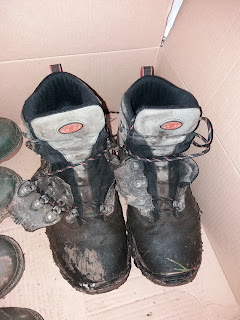