Canal fishing at Birkwood fisheries for pike and perch was today's plan.

After a hearty fried breakfast, as I must have still been hungry after last night's mixed grill, we packed up and set off. 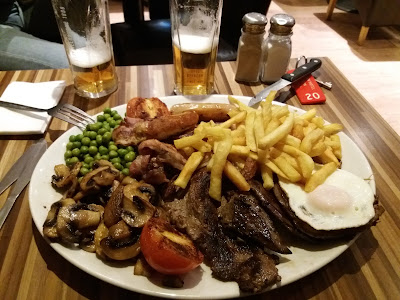 Driving through the fishery, we came to the canal. About 5 or 6 swims through woods covering a stretch of about 150 metres was today's playground. It looked perfect, as we tackled up and cast into the flat calm water. 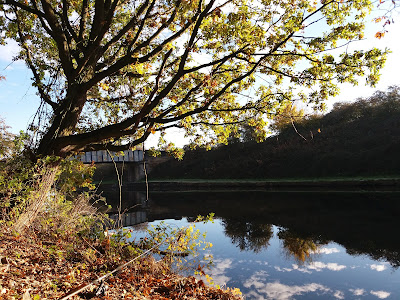 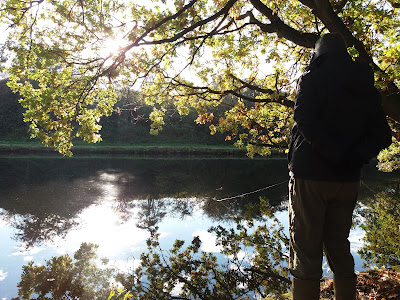 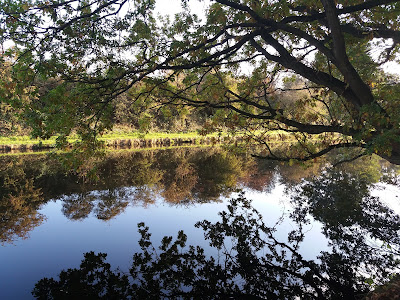 Deadbaits in the water, I soon had my coat off, and was sat in the sun, not a cloud in the sky. This was a glorious day for fishing. I decided to get the spinner out and try for perch. My first few retrieves found nothing, then suddenly a 5 inch perch, with a 2 inch high dorsal followed my spinner right up to the bank. Seeing me, it decided against, and was away. At least we had seen a fish!

No interest came from any of the swims, and by lunchtime we were in the end swim. We walked down to the river to stretch the legs and have a look, before we were going to try the swims again.

We came across a swim we had not started in, thinking it looked too cramped for two.
This time, I had a quick cast with the small paddle tail. Suddenly a small tug on the lure. A bite, from a perch. But it came off. Pulling the lure in, I noticed it had it's tail clean bitten off, that was no perch, but a pike!! 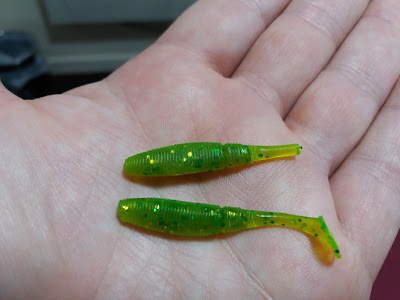 We continued but no luck. Finally the last swim, sitting together as the sun moved round and we were in the shade. Again a perch followed, this time we both saw it, as it tried to attack the lure. Sadly no hook up. The blank was inevitable but we both left happy.

A great couple of days fishing with my dad. The annual trip is now in its 5th year, previously we have been to the Wye twice, Scotland once and the Swale once. It's not always easy to arrange with busy lives, but I am already thinking where we can go next, not to blank but to see Davey beat me again!!
Posted by Adam C at 17:35:00 No comments:

The first day of the annual Chumbley trip and I can confirm the old man has not fallen over once!
This year we decided to do a bit of carp fishing for a change. We settled on Birkwood Fisheries near Wakefield as we could fish on the lakes one day, then the canal the next.

Setting off from North and South we both made our way to the venue. 2 miles from arriving, I was bursting for a wee, managing to just make it (well, not really) in a pub. So after that adventure, I made it to the lake. Davey was there, dry and waiting.

Picking the nearest two swims to the car park cos they looked good, they actually did! We were ready to do some fishing. 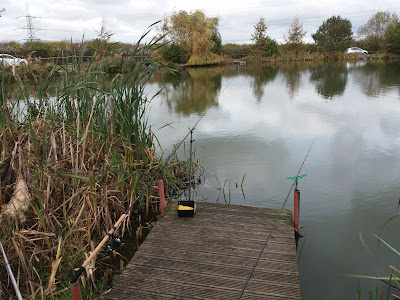 I was starting with the ledger rod and pellet as bait, with a small pva bag. Davey was starting with a pike float and sweetcorn, barely a metre from the bank. He had no hooks, so had to borrow one from me. Who comes fishing with no hooks??
A little knock on the rod, and I was soon slaying the beast of Birkwood, showing here.... 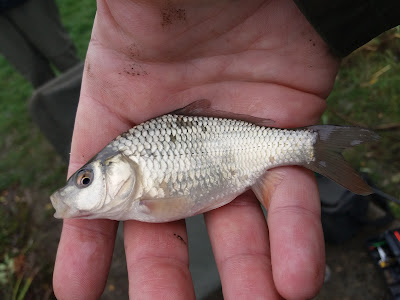 After a lot of chatting, catching up and cakes, my rod lept forward and was soon heading for the lake. Very slowly as not to follow it into the water, I leant forward and picked up the rod. A good fight later, I  soon had a nice little carp in the net. 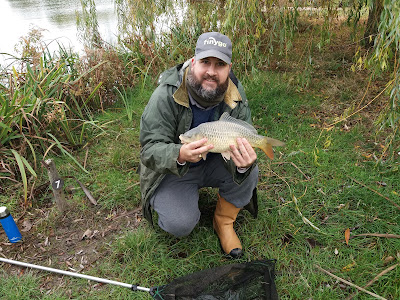 I re-cast and waited. Suddenly the rod bent over, and I was in again. This felt bigger, slow and deep it swam around. Then suddenly the hook pinged out and the fish was named "the one that got away"

Davey went back to his swim, I think cos I had the put the cakes away and started fishing. Soon he was proclaiming "I'm in" and triumphantly declared a "roachy type thing" as his prize.

It was not long before we were back in the same swim (mine), chatting about old times and enjoying ourselves. I told him he might as well bring his kit over and fish in my swim. So he did. A quick rummage through his bag, and I found packets of hooks!!

The anglers amongst you will know exactly what happened next!!

Dip, dip went his pike float. Strike went the old man, splash, splash, play, net. He had caught a lovely looking carp of about 10lbs in my swim, right under my nose and the rod tip!!
Quickly, I tackled with a float and sweet corn, and joined him. 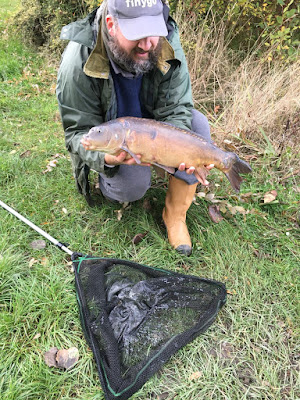 A few more bites, but no more fish. Back in our digs for a few beers and food, before tomorrow's fishing.

I really enjoy these annual Chumbley trips, is great to set up Daveys tackle and watch him catch all the best fish! Love ya dad. 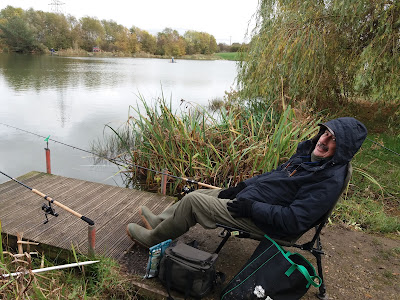