Perch Needle in a Watery Haystack

For Giles's Annual Birthday fishing trip, he invited me to Ullswater to fish for Perch with lures, light rods and a roving approach that would require cars. At 7 miles long, half a mile wide and up to 60m deep, Ullswater is one big haystack. 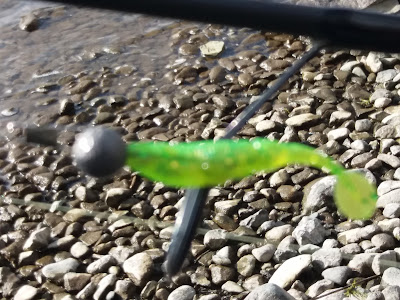 We met at Pooley Bridge at 10am after both dropping the kids off at school ( non eupho),  no such dawn raid on this incredible water. We parked up and started with small lures around the old pier structure. Trout all around us taking the emerging flies off the top. We both changed to spinners, casting right on surfacing Trout but they were all preoccupied with the flies and none wanted our lures. 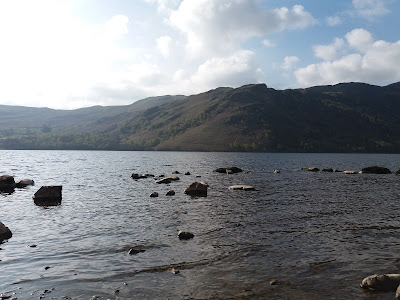 We continued, wading out to where the ledge started, plunging from waiste deep to 20 or 30 feet plus. Switching back to paddle tails, I was first to have a follow. A Trout following right in to the clear shallows chasing my lure. A few casts later, I was in. The rod shaking as I did battle with a small but strong fish. We both hoped Perch. A Trout of about half a pound came in, darting around. Unhooking itself just as I bent down to pick it out the water. 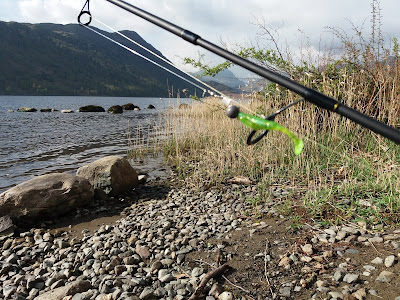 We then walked to the new pier where Giles worked a drop shot rig in and around the structure, only to be interrupted by the steamer coming to collect passengers.

We then went back to the cars to try a different spot. Driving to Howtown, remembering to pause the Finygo App that was recording me. This time we arrived at a different pier, again working our lures around the clear water that suddenly turned dark as it dropped into deep water. Here we were happily fishing until once again the steamer arrived! It seems we were on the wrong timetable, maybe the Finygo App could include local ferry timetables in its database?!?!

Eventually we left to find a new spot, where the water and wind were warmer, because although the sun was shining, the air was bitter cold. We fished under the trees, again casting to surfacing fish. No Perch came to see us. We wondered if they were still in the deeper water, maintaining a constant temperature. 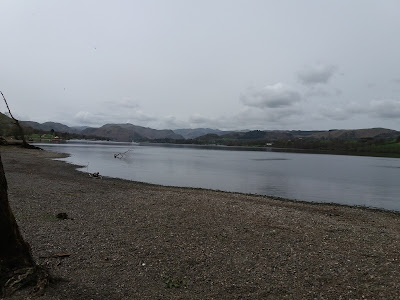 Birthday boy had to head back, but I fished on. I had booked a bunk in Helvellyn YHA so could benefit from evening and the following morning. I drove to the West Bank and fished as many of the parking areas as I could. There were plenty of Trout still surfacing but as the wind got colder, these soon stopped. It was time to pack up. No further fish were caught. 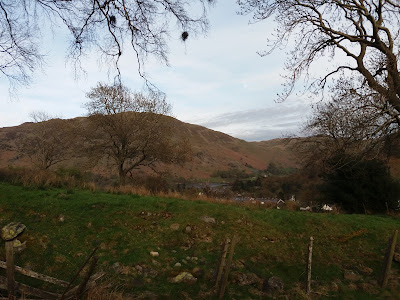 A bite to eat and a pint in the pub, followed by reading my magazines in the common room made for a nice evening.

Saturday was expecting to be cold and wet. I woke early, looked out the window, no rain but the wind was bitter. I checked out and made for the water. I saw two other anglers set off on a boat, I assumed to fish for the Perch. This gave me renewed hope, so I continued to thrash the water. Nothing, not a sniff.

It was too much, my tummy was rumbling, so I headed for Patterdale shop for a legendary Cumberland Bagette. There were no problems with the photography this week! 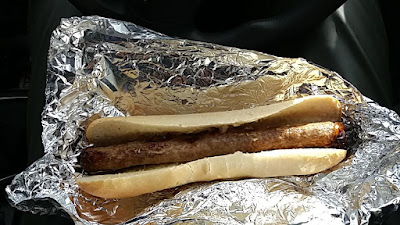 For the lure anglers that measure their catch not weigh, this bagette was 28cm!

I fished the day in reverse. Up the West side and finishing back at the Trout spot at Pooley Bridge. A different outcome and no additional Trout caught. 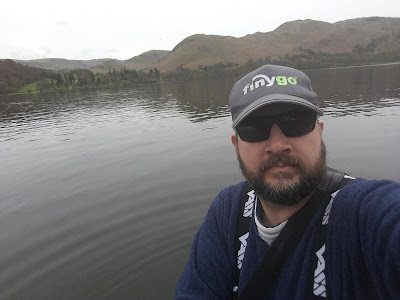 As I headed for home, I thought how hard such a big water was to fish. I like the view of my Finygo App showing my distance traveled, although mostly that was driving. As I stored my trip, I hope the info can help other anglers. It dawned on me that having "winning" methods on a particular water is always the place to start when trying to find your needle! 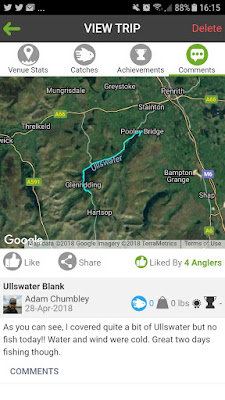 After the weekends success, I thought I would share a near failure and hopefully get some advice from people as to how I can improve.

Fishing alone has its disadvantages, namely assistance in landing fish and Photography! There has been a lot of chat on social media about taking pics and I will add my two pence!

Foremost is the fishes welfare. I have had a few pike that no one has seen but me because I felt they needed to go back straight away. Thats not for any suspicious reason, more just time unhooking or poor bank conditions. I caught a nice pike once in a swim that was so muddy, I could not stand for too long, let alone set up a great shot situation!

I have a mobile phone like everyone else, I brought a clip for it and have the screw for bank stick adaptor. I don't use the whistle app that people talk about, instead relying on the 10 seconds of time to get into position. 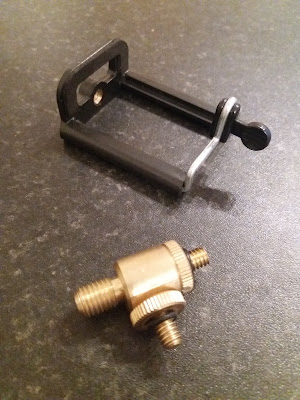 I also have bought a Samsung camera with a flip screen that is similar to the phone set up. The bank stick attachment fits the phone and camera and I also have a mini tripod that fits the camera. I feel I am equipped to take a good pic. But my success rate is not the best. 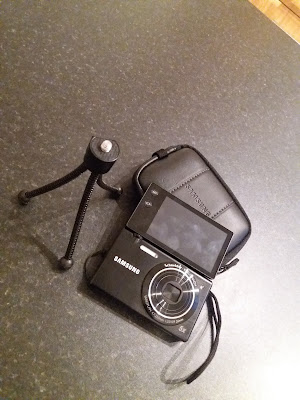 I am determined to practice on the field in a crouched position with the bank stick and bits and try and have the distance stored in my mind so I get a good pic. But until that time, I live on the edge of disaster...

On Saturday I used the camera on a bank stick. Set up while the fish was unhooked in the net. Set up above the mat, I was ready. Unfortunately it did not go well. 10 secs seemed a long time to hold the fish low but steady. It flapped towards my chest. So I put it back on the mat. No one told the camera to stop counting, but it made me smile, and I saw the funny side. 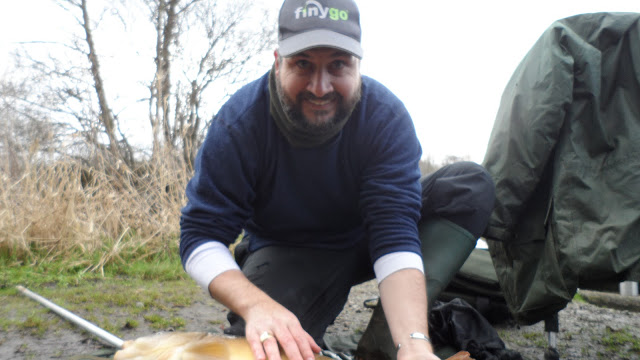 The second pic, which needed me to put the fish down and press the button again was no better. I think the fish wanted to wear my jumper, coming in for a cuddle and just being covered by my hands. 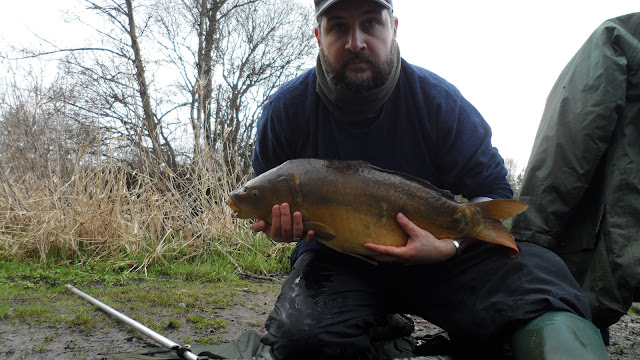 As I mentioned, by now I wanted to return the fish so after one quick try again, I was too eager to get close to the camera. Successsfully removing most of my head. 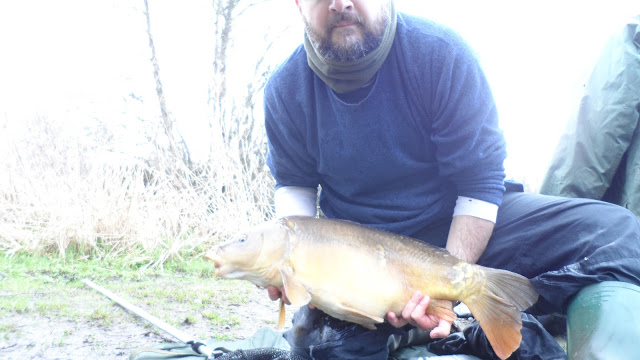 Not a bad pic of the fish, but I deserve to be in the pic too!!

By now, I had decided to return the fish and it was in the net. A man suddenly appeared from around the lake and I asked him to take a pic. He agreed and in less than a few seconds I had my shot, but would I have been happy with the 3 above if he had not come by??

In truth, seeing the fish swim gracefully and strongly away in the clear water was enough to make me smile, and as for you lot!? Well, you will have to come fishing with me and we can share the picture duties! 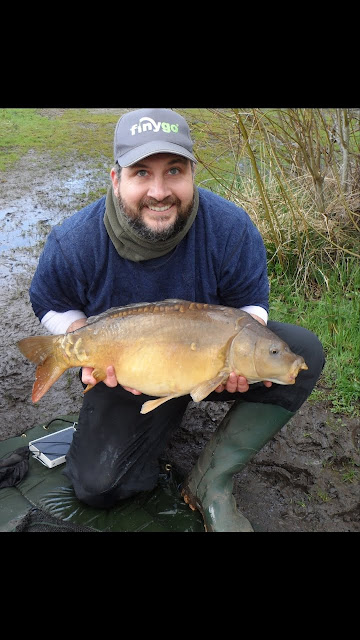 Email ThisBlogThis!Share to TwitterShare to FacebookShare to Pinterest
Labels: Carp

This is a different blog today, as this is a live blog. I am currently sat on the bank. I am at Lonsdale Park in Cumbria, a holiday park that allows day tickets at certain times of the year. As the title suggests, I am using prawns as bait. Is the first time I have tried using prawns, so in my own stubborn way, I am not giving up till it works. No fish yet, but they are crashing around and showing all 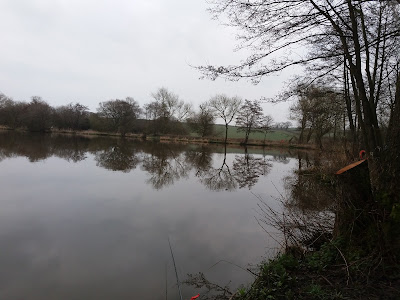 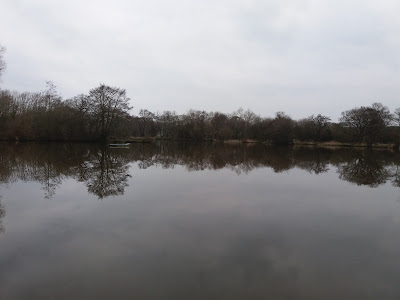 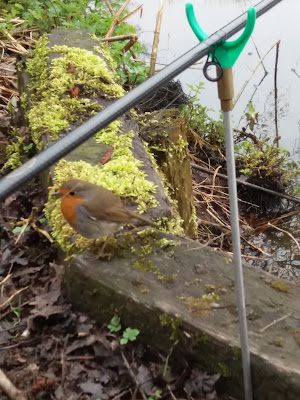 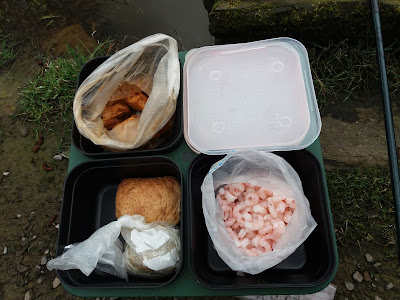 Plenty of bait too!!

I continued with the prawns and swapped the other rod with meat, paste and bread. As the sun got stronger there was quite a few carp cruising the surface. My mate who told me about Lonsdale told me to take a loaf of bread to try for Floating but I only had a small roll with me.

I tore a few pieces off and baited an area. It was slow but the fish came. I tried with some on the hook but nothing. An hour later I saw a carp about 10 ft from the bank, feeding on the surface.
I cast the bread and waited. Perfect cast. The larger piece was completely engulfed. I waited. The line started to tighten. Strike. I was indeed "in". Now the Carp turned into a train  the strength was clear. Slowly I started to win and when it surfaced I knew it was a good fish. As I got it to the net, I knew it was going to break my current 9lb odd Carp pb.
It weighed 13lb 12oz! New pb. I was so happy!!! After a few pics, back she went.

I fished on, stalking and changing baits but with no luck. You can see from my Finygo map recording, I covered the whole lake. 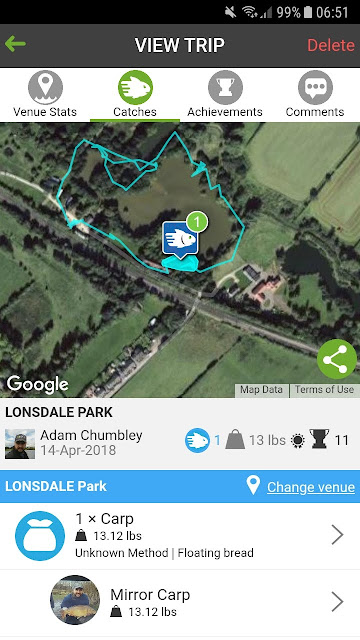 I will update the pics later but this is the best I have at the moment. 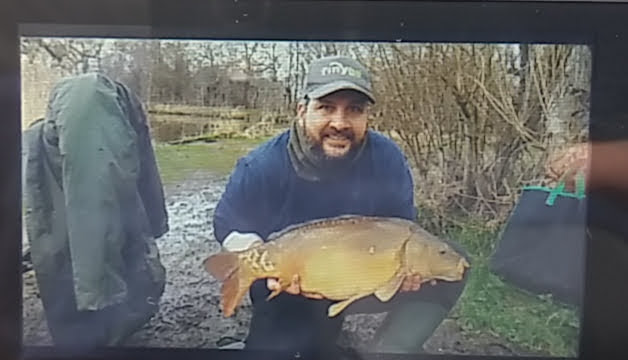 Today was all about trying a new bait and perseverance with it. However, it shows that in fishing you may have to go back to what you know and keep the perseverance for another day, Checkmate!
Posted by Adam C at 10:59:00 No comments: