I have told you the story of my first ever fish so will jump forward 10 years to my best. August 2000 River Yare, Norfolk Broads.

Although I could now drive myself, pay for myself and certainly make my own lunch, my dad was again with me for this trip, he did pay and drive too actually!!

We were on a two day Pike Safari with The Predator People.
predator-people.

We had Pike fished once before on Bewl water from a boat in the winter. The weather was awful, we were not very experienced  but we thoroughly enjoyed it. By the end of the day my dad had managed to fluke a small Pike and lose his new water proof gloves.

We decided to go with a guide as we knew Pike fishing was specialist, Pike need to be treated with respect and with great care as we did not want to hurt ourselves and more importantly the fish, if we caught any.

After meeting our guide and getting all the kit we set off on the boat to a secret location. In truth its not secret, back then I never kept notes so I have no idea where it was. We moored mid river and fished off each side of the boat to what I can remember was a featureless area on the broads. I say this because all my other broad trips were full of me declaring every reed clad bend on the water to be " definitely Pikey" and yet I had never caught a Pike. 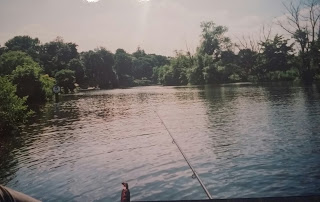 Rods set up, we cast into the spots and waited. The advice was, on seeing your float move, to reel down to disengage the bait runner, reel till line was taught and then strike. Failure to do the first could lead you to flying off the back of the boat as you strike and with no resistance with the bait runner, not even a 30lb pike would stop an early bath.


It was not long before my float moved, twitched, bobbed and sailed away. I was in! Omg. Was so excited, followed the above advice perfect, you thought I was going to fall in! I was latched on to leviathan.
I played it easily on the strong tackle in open water and suddenly it surfaced. My dad and I looked at each other and simultaneously said "Croc." The Pike was an awesome sight, so long, strong with a huge head. We had no idea of weight but having never caught before, it was my Pb.
We landed, unhooked and weighed the stunning fish. It was exactly 15lb. I was so chuffed. Allan said it would be a 20 in the winter as it had a large hollow belly. Did I wish it was a 20? Of course I did, I still do over 15 years later as it is still my Pb, but it does not stop me trying to better it. I was no less happy though and if a twenty graces my net now, my grin will resemble my 20 year old one below, plus the ever greying beard!

The trip continued, my dad caught a 14lb 11oz and I caught 3 12lb fish and several smaller Pike, including some in the middle of the night, woken by the bleep of a run on the bite alarm. " Its your rod dad, go" only to be told " you get it son, I am sleeping" 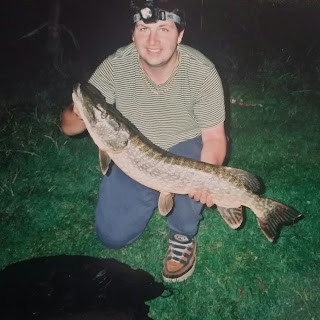 Yeah he sleeps a lot, but he was happier seeing me catch than himself. A quality he tries to remember when he landed the pike in my previous post. 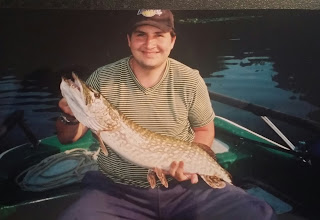 I would recommend going on an organised Pike trip first of all, or with someone who can handle the Pike safely.
Now, I was armed with this knowledge and hunger to better my Pb, I set off to become a Pike fisherman.

Before I tell you about my more recent fishing tales I thought I should start at the beginning.


I was 10. Presents included my very first fishing equipment.


A 10ft Daiwa Match rod, I still have this although it has now been repaired because I stood on it and broke the cork handle.


Reel, I think it was a Fisherman 5 hundred something. I do not still have this!


Weights, plummet, floats, disgorger and ½ pint of maggots sat in the fridge next to a huge Turkey and more veg than River Cottage HQ.


A book, The Know How Book of Fishing, of course I still have this book, my 6 year old son, Rupert likes to read it and now I have bought him the updated version.


All this kit was placed in a Liverpool FC Boot bag and kept for Boxing Day as there was also a “ticket” to fish South hill Park pond the very next day.


Boxing Day came and the weather was inclement to say the least. Bearing in mind like many other anglers they fished because their dad did, mine did not. So there was no fishing trip that he was always going on that I was then dragged to. Mine was completely the opposite. My dad would take me fishing every Saturday that I wanted to go and he would sit with me, read the paper, eat the sticky buns and frangipanes, sleep and just be happy watching me fish. It’s not much different now, although he does fish, usually flukes a bigger fish than me but still likes to sleep whilst doing it!


So we waited till the afternoon but it was still windy, rainy and awful looking. My dad still took me on that day to fish the pond. We had very little idea what we were doing. We had spooled the reel before in the warm, string on the spool first, just like the book showed us.


Opening our tackle bag, remember it’s just a Liverpool FC boot bag, we saw the floats were broken. Wooden floats put in just a bag meant they just snapped. We had one that was not broken so that was what we used. Now we had to tie on a hook. We used the book to try and tie the spade ended hook on, I still don’t think this is easy but we persevered and formulated some kind of knot that held the hook on the line and did little for what I would now call rig presentation.


We finally had a rig we were happy with. The weights pretty much pulled the float under in the wind and tow of the water. The line was so light and springy it just came of the reel on its own. The maggots were thrown in liberally to stop them getting to wet in the driving rain. We were for all purposes “Fishing”


I was casting like a pro, well, I was following the book again. Finger on line, lift up bail arm etc etc. My rig was always being positioned perfectly. Perfectly in the trees, perfectly in my dad’s coat and perfectly in a pile on the concrete bank we stood on. 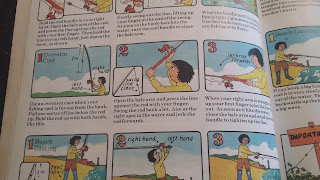 We stood in the wind and rain for what seemed like hours with very little action. Mostly because I wanted to re cast every few seconds to where fish must be. I was casting for the 1000th time and then it happened. Birdsnest!


The mother of all birdsnests. We had over filled the spool with this bouncy line. The wind had blown at the right time on freezing hands and the majority of the spool had emptied between the reel and the first eye. Great big clumps of line now covered the reel, my hands, the rod, the floor everything. But the cast had worked, the baited hook had gone in the water, I would estimate a 16th of an inch from the concrete bank and maybe a foot down in the water, but it was definitely in.


My dad set about to untangle this birdsnest. We assumed that was what you did, the book did not have a chapter on this. It was impossible, even with 20 fingers picking loops and holding them still, this was not going to work.


“Stop pulling the line Ad” was all I heard.


I shrugged. For once, I was doing as I was told. “Stop pulling the line Ad” came from my dad again.


OMG, FISH ON! The line was being tugged, the rod tip was shaking, the line was going, and we had hooked something. There was no way we could reel in, so we just lifted the rod. This was all that was needed as a 4oz Perch on 10ft of carbon is not likely to go anywhere, but to us it was magic. The seed was sown.


A quick flick to page 7 showed us how to handle the perch, and unhook it. This was a spikey little critter I thought, am I sure I wanna be catching things like this? Of course the answer was yes, I wanted more and more. 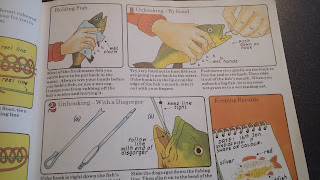 The Hanky came out my dad’s pocket, we wet it and handled the Perch confidently. The hook was removed and we put it back to swim down and away. I think I have simplified this a little but we definitely had felt like winners.


We packed up and headed home for cold meat and bubble and squeak, what a boxing day. What a memory. What a result. Can still see the smile and little chuckle that my dad did in the car on the way home, it was a lot more dignified than the ones he does now when I take him on the Swale and he catches a 9LB pristine looking Pike on a sardine bigger than our first ever Perch. A tenuous link, but I don't have a pic of that first ever Perch! 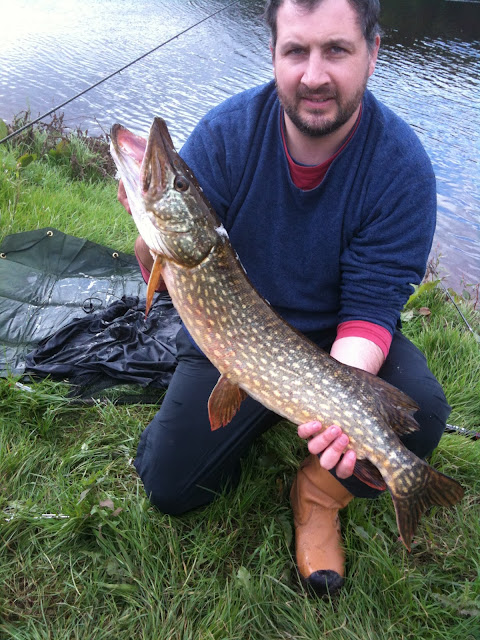