A short morning session on the Tees was today's plan. I headed there on my own but Dave was off work too, so was going to join me for a few hours.

Like everyone, I too, am a creature of habit. Same places, same swims, same bait, the sames could go on. But not today!! Instead of going right, I didn't go wrong, I went left!

A new area to fish lay in front of me. Coupled with some (assumed) Environment Agency spraying of the Himalayan Balsam meant there was a lot of river to target.

Now, I did start with the same lure. I was hoping for perch, so started with small shad style paddle tails in pink. This is my go to choice for perch, but you may remember I caught pike on this small lure a while ago on the canal.

No such fluke today, and quickly my perch count was at 2. The quality of the perch coupled with their eagerness to feed has got to make perch one of my favourite species of fish to catch. 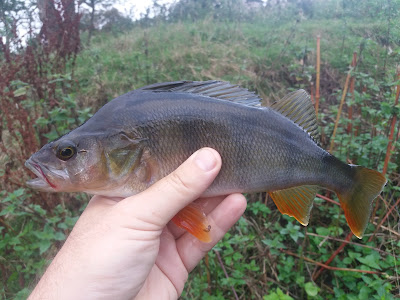 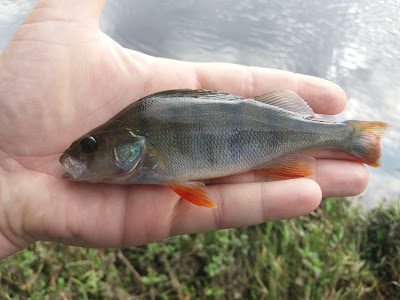 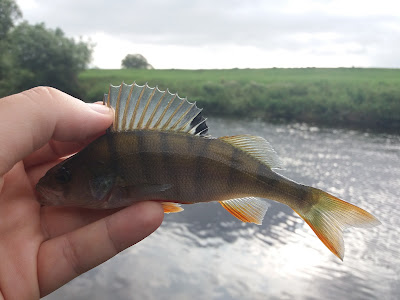 As I moved from swim to swim, I found myself under a tree. Perfect timing to play hide and seek as Dave arrived. I continued to cast as I caught up with Dave, he has had a great season, already catching at least 20 Tees pike! My count was still one!!

As the lure came towards me, in a blur it was gone. My reel screaming as the clutch took the lunge from the pike! Yes, the fluke had happened again, making it skill, surely?? It was great battling the fish tight under the tree, and the predator net christened by a carp was eventually going to be used for what it was made.

The pike slipped into the net and I was grinning. My second Tees Pike and the first from the bank. Happy happy flukey, I mean skilled boy!! 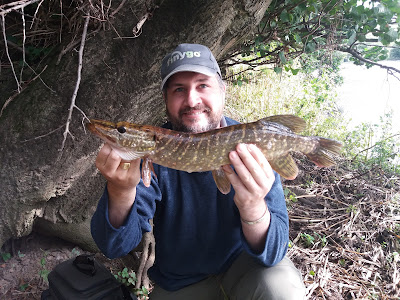 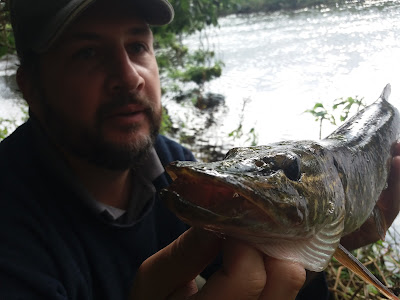 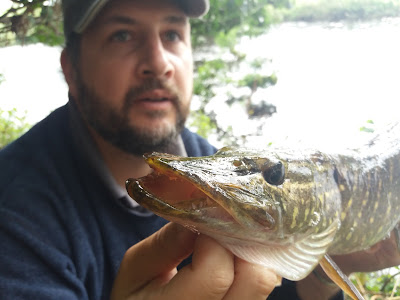 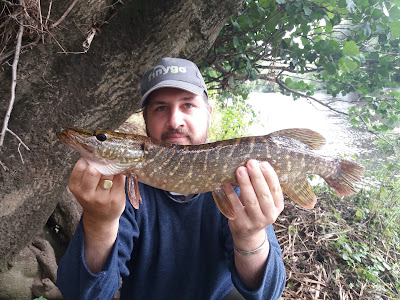 I let Dave find me, so he could take the pics and then we headed further into the unknown to find more swims.  We fished a good few swims, my perch count trickling up until Dave joined in.

A pike, taking his soft plastic trout lure, actually splitting it with the force of the take. Soon the pike was ready for the net. River fishing is wild, no manicured pegs or swims and this was no exception. We always make sure we can land a fish from a swim before we cast, but no one told the pike this.

It wrapped itself round floating debris, then got stuck in my net, then I had to use Dave's net to net the fish, which was still in my net!! It really was a pike of mischief! The fierce take meant the hooks were a little deep, but within seconds Dave had snipped his trebles to pieces, removed all the metal and the fish was back in the net resting.
A quick pic and the fish was ready to go. Well not Mr mischief. As I slipped it out of the net it swam off, turned around and promptly swam back into the net!! This fish did not want to leave us.
Eventually, the pike got bored with us, and with a quick splash, was off on its way. 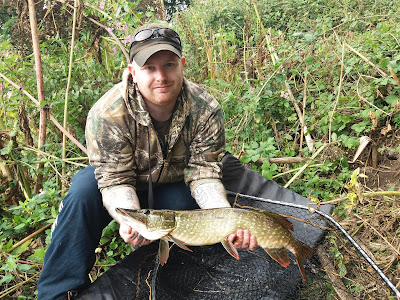 As we fished our way back, my perch count increased but no flukes. 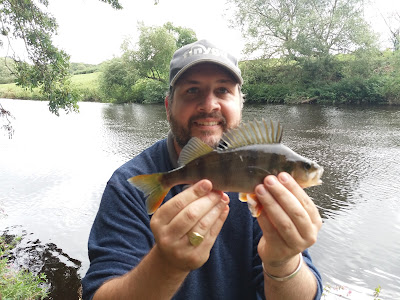 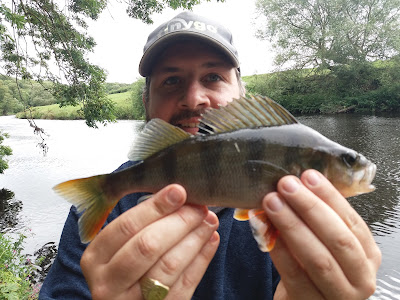 As we got back to a spot where I lost a lure snagged to the bank, I was telling Dave the detail. "Like this lure?" He said, as he bent down and pulled up my lure, lost and left weeks before!!

I believe in luck and flukes, 2 pike now on small fry lures and my lost lure found.

I chuckled to myself driving home, "I'm the flukest, I mean "most skilled" angler I know!" 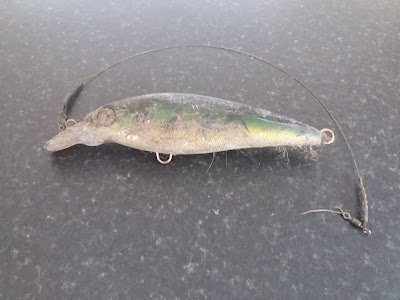