Sadly today was a blank, but it was good to fish a new venue. Dwix and I travelled by walking, tube and then bus to fish the Grand Union Canal at Harefield. We arrived at Harefield and went to the tackle shop, a day ticket and £20 later we walked to the Canal.

We had to walk the last bit, shame we couldn't get the train direct, seeing the HS2 (topical) construction site in the distance. 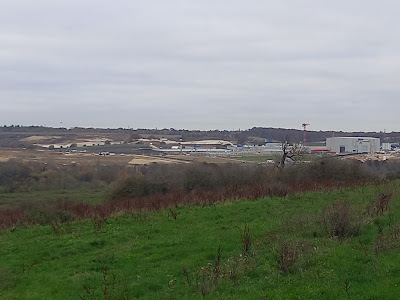 We found a good looking swim where the river joined the canal. We used maggots, worms and used bread crumb as ground bait. I started off with a feeder with breadcrumb, worms or maggots on the hook. I then changed to a float. Our only action was when I reeled in and disturbed a fish, it jumped out the water as the float went over it. 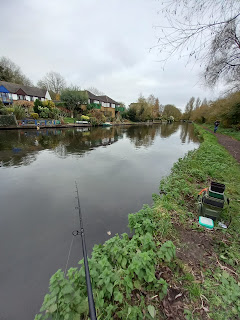 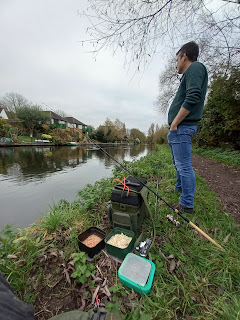 After a few hours of nothing we walked on and I lure fished in the hope of a pike. Sadly no action  either. We decided to call it a day and went for lunch. A few beers later and we are home. The canal definitely had potential. I will add it to the list of fishing again...... 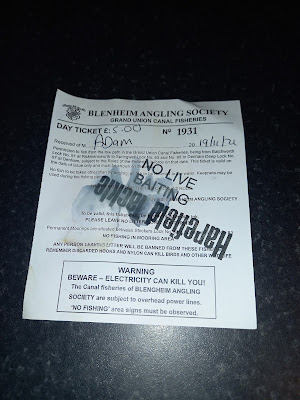 I am heading down to that there London to spend the weekend with the boys. We have decided to do Movember, so myself and the tash jumped in the car and headed South. As Dwix was not going to be home until later in the evening, I thought I  would stop on my way past the Swale and see if I could bag a Chub or two. 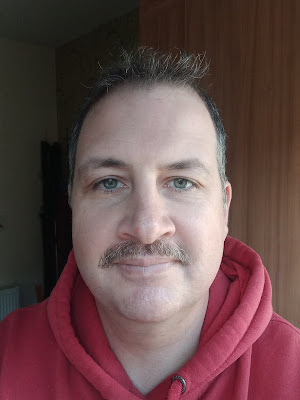 Bags all packed for the fishing and then the weekend, I set off at 6am and drove to the river. The car told me it was 16 degrees, don't think I needed the thermals on. I walked to the river and immediately saw changes. A few trees that were close to the bank have fallen in. These have created new slacks and potentially new fish holding areas. I thought I would put this to the test. 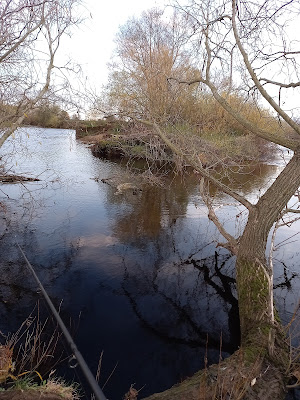 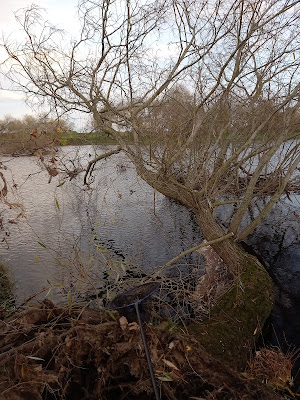 I filled a small feeder with breadcrumb,  moulded cheese paste around  the cork ball and cast in. After a while, there was a knock, then a gentle pull. I struck, fish on. I played it in the tight gap between trees, it felt very much like a Chub. Then the hook hold gave way. No break, no snag, just came free. I fished on but this incident must have spooked them as no further bites. I decided to head off downstream. I do like this time of year, the bank vegetation is really low, you can access more swims but the fish still get cover. Plus, in reality the fish are probably well hidden in the roots, stuff we never get to see.

I walked downstream and just looked at the river, I was thinking of where to fish and I remembered a few trips ago seeing a Chub on my bank, trying to tempt it with bait but it swam across the river to a bush on the far side. I decided to go fish there. I cast in and waited, it must have been less than five minutes and the rod pulled tight, I struck and the drag gave out line. A good fight from a good sized Chub.

I tried to weigh it, but the battery had died. I hoped I would not live to regret this later!? It made me think about packing a spare, and a spare spare, and well you know what I mean? Where does contingency stop? 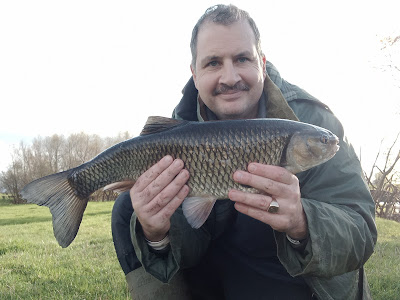 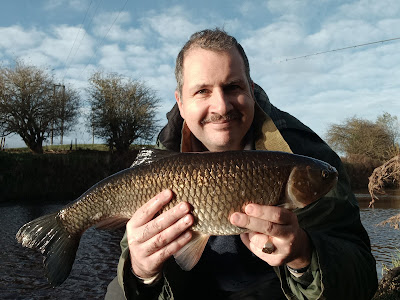 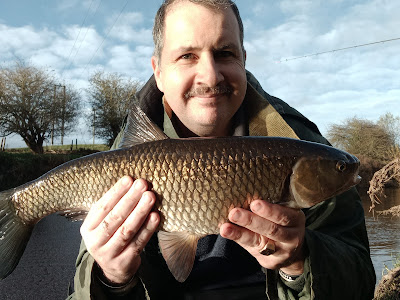 It was easily over 4lb but I don't think over 5lb, so I was happy. I was glad I went for the walk, although when the sun came out, with the thermals on I had to take my coat off!

I walked back the way I had came and fished in the first swim again, deciding to eat my lunch here and see if the fish were hungry again. No bites, but in the sun you could of been mistaken that it was a summers day. 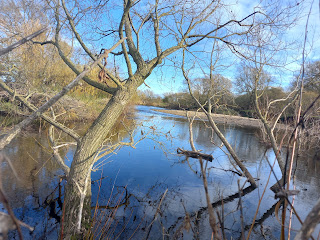 After no action, I decided a short walk upstream. About the same distance as I had walked down, just to balance it out! A few good swims but nothing. Literally nothing! I realised I had left my cheese paste in the first swim. 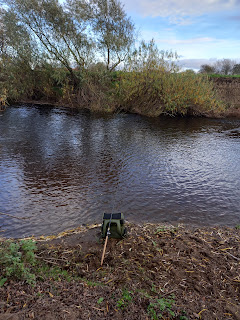 A quick walk and I was reunited with my cheesy bait. It works magic this time of year. I have caught numerous Chub on it, Trout and even Pike! Amazing, definitely a fluke and a one off!

As I was so close to where I started, I thought I would give it another go. Third time lucky? I only had 30 minutes before I was going to set off for London. I cast in and waited. I had a strange bite, and then nothing. I waited a few seconds but nothing happened. A fish must have taken my bait, so I wound down to check. As the line tightened, something pulled back. It woke up and lunged around the swim. This was no Chub, big lunges caused the drag to spin. It was toothy as expected and was quickly netted. Two pike on Cheese paste now, how many more before I list cheesepaste as a dead bait!? 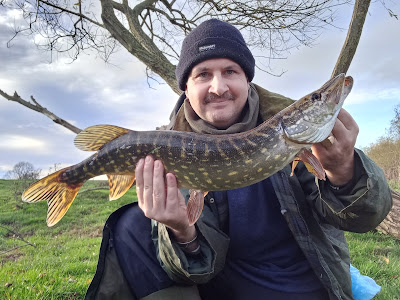 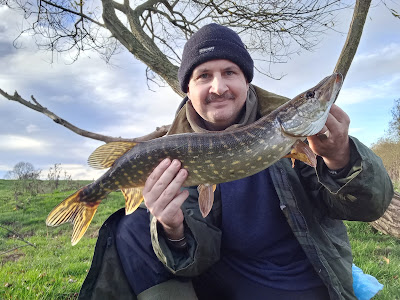 I have persuaded Dwix to try some fishing again. We blanked last time, so tomorrow we are heading to the Grand Union Canal to see what we can catch. I do hope he has some batteries!!

As you will know, I love a sunrise and sunset time. I was contemplating fishing into dark as I have seen some bigger chub caught after dark, although I enjoy going early morning. If I was to stay at home a bit, I would be scratching the walls to be out fishing. However, now I can fish "all day", given the shorter days. Although if I am to fish a couple of hours into dark, I will need some wader pyjamas!!
I also like to fanny, I mean study the river levels prior to fishing. This first pic shows the levels at Park Bridge, way up in the Yorkshire dales, you will see the spike between Saturday and Sunday. 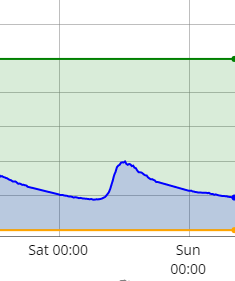 In the second picture, this spike is then seen at Catterick Bridge about 30 miles downstream approximately 24 hours later between Sunday and Monday. That is why I look at the levels at Park Bridge the day before I am due to be fishing. 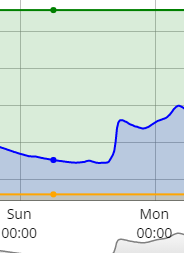 I had made a fresh batch of cheese paste on Friday afternoon, I also had some meat and worms from previous trips and I was ready. I was planning on walking a fair bit, so just had the 7ft, 1.75lb tc ledger rod, net and terminal tackle. Instead of a straight ledger, I decided to have a small cage feeder with bread crumb in, this would add a little attraction and continue to help me empty the bottom drawer of the freezer.
I was going to fish a completely new area but thought I would keep that for summer. I headed to the Swale at Morton. Parking up, there was another car already parked. I got my kit and headed to the river. 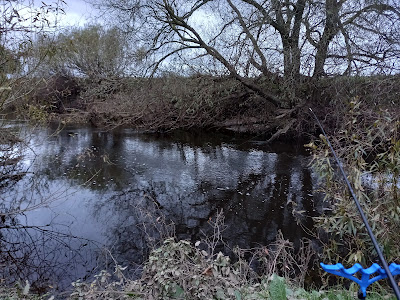 In short, I fished cheese paste, meat and worms with nothing. I had a few taps that I think was Cray fish. I think today I got it all wrong. Wrong tactics, wrong swims and wrong bait. I couldn't buy a bite!
The water was up alot since last time I fished it but was still quite clear. There were swims that looked perfect for float fished maggots, however I was ledgering bigger baits. I just got it all wrong. 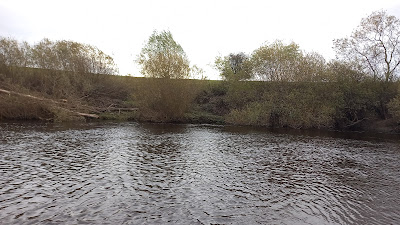 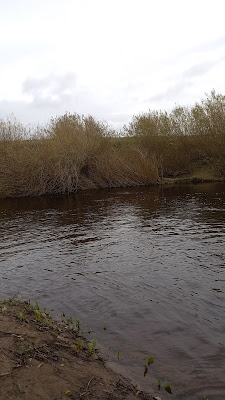 The wind was bitter cold and increased all day, I was sheltered from it most of the time, but when I wasn't it was a menace. The rain came a little at about 12pm but the wind quickly blew it away. At 2pm though it rained heavily and as I was near to the car, I took this as a sign.
"Nevermind" I said to myself, there is always next time, plus I got out and had a good walk. 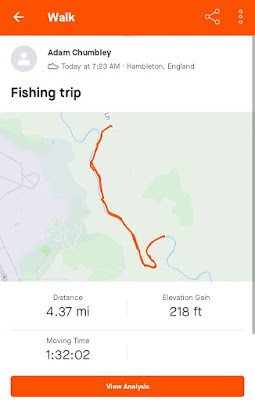