With the river levels a lot lower than in recent weeks, when it came to deciding where I would fish if came down to a coin toss. Tails was river Tees obviously, and heads was the Swale. The coin tossed and heads it was, I was off to the Swale. 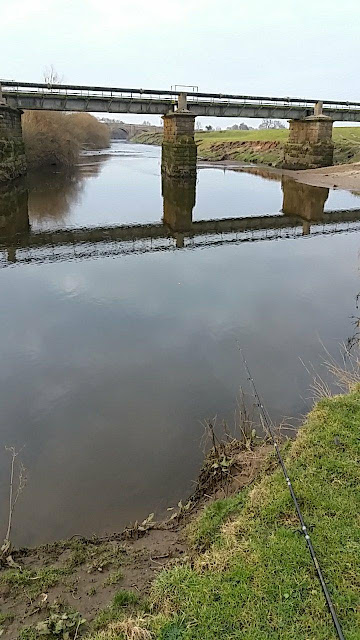 With the lost fish last time, I would go for Pike and Chub again. Deadbaits and meat or paste for chub, and I would try something else for them too.

Arriving at the river at 7am conditions looked good. The river had dropped a lot and I settled into a swim for Pike. As the sun got up, it was apparent I did not need beanie and gloves, it was more a cap and glasses day! As it got lighter I realised just how clear the water was. If I had tossed the coin into the river I would have been able to see the side in 6ft of water and maybe the date on the coin!!! It was gin clear with added finings for clarity! (Google it)

It was going to be tough.
After nothing on the Pike rod, I tackled up for chub. Having caught Chub whilst on deadbaits, I cut some Lamprey into chunks and used a meat spike to present it under likely looking trees and rafts. The majority of time it had to be right under or I could see the bait. 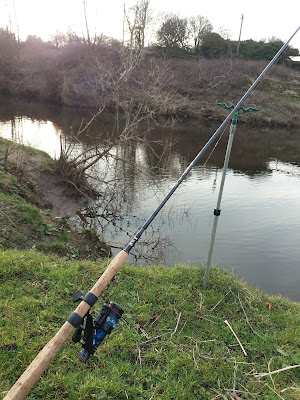 I wondered where on days like this the fish would be. Where they would shelter from predators. I have seen the water this clear in summer, lower too and always seen fish swimming about. Today I saw nothing, the river cupboard was bare.

After walking the stretch and counting stones on the bottom, I thought I was better off having an early bath and giving up. After packing up and driving off, I heard a clumping noise. Thinking it was the frozen puddles, I stopped looked in the mirror and seeing nothing, drove off.

As I was unpacking the car and seeing no net in the boot, I realised I had left the net propped against the car as I drove off. Completely oblivious as it's a piece of kit I have not been using since 2018 started!!
Annoyed at myself for the loss, I got settled down to watch the Rugby, do some on line retail therapy and generally curse some more, (the rugby score and out of stock net) 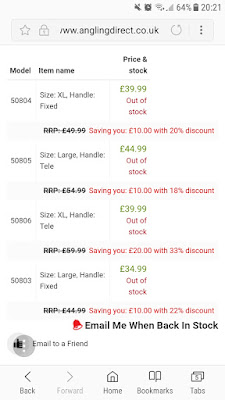 Who needs to be old to be grumpy? I am doing just fine!? 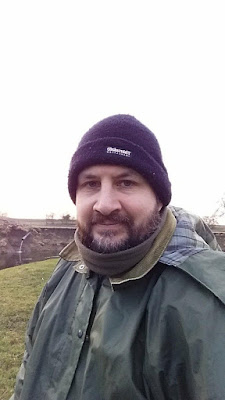 Dave and I hit the Tees to see if we could tempt a Pike. The river had been unfishable for a while with heavy rain, cold weather, flooding and a lot of sediment. Today looked better. It was a day of walking and casting. Dave using his large lures on heavy tackle, me with deadbaits and small soft plastics on a light rod for a change. 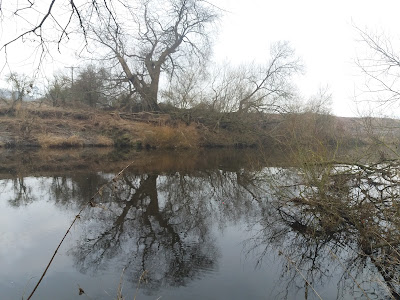 We started off at a new area for me, in a classic looking pike swim. As the fog cleared, the river looked perfect. The peacefulness only interruted by the splash of the large burts or other type of lure Dave flung on his 80lb braid.

As I watched my float, I saw a large head break the surface right next to it, it's snake like neck and body coming completely out the water as a Cormorant looked as surprised to see us as we were to see it!! It must have been after my bait, but the float did not move, so assume it did not get it. Assuming the Cormorant must also be here where bait fish are, we fished on.  We continued in a few more swims, only seeing a Heron. Again assuming this to be a good area for bait fish and therefore Pike, we fished on.

A quick change of location saw us walking a good few miles. We spotted so many good swims for both Pike and Chub. 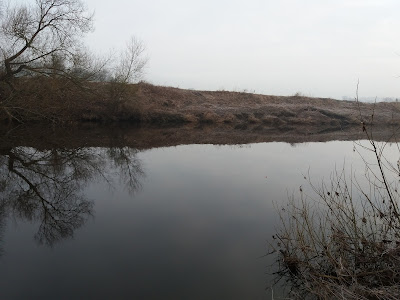 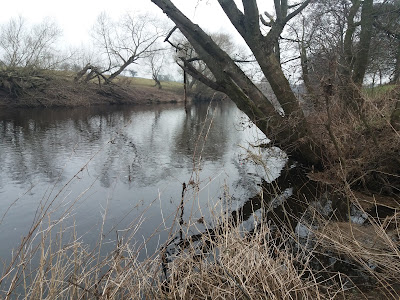 So it just leaves me to tell you how we got on, as is normally the case when I have something to show, this is best done in picture format, so I will leave you with this... 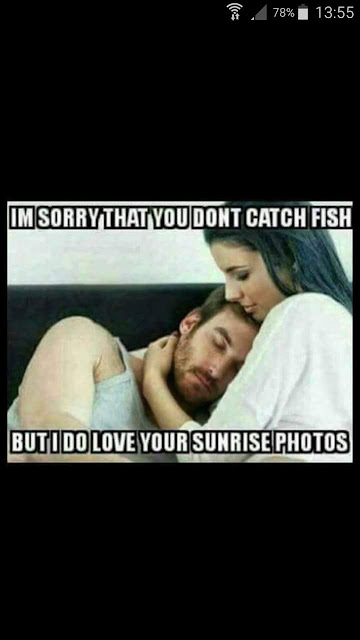 Today I was back on the Swale, this time at Morton. I was fishing both the Stockton water and the Northallerton sections. My intended target was chub and pike. 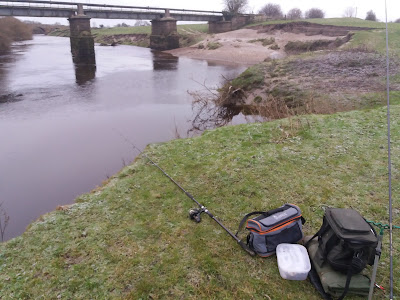 The weather was described as blustery with sleet! But it was a day I could go fishing, so fishing I was going!!

I  had dead baits,  cheese paste and curried meat. All taken out the freezer just before I was leaving, put in my well used cool bag, into the boot and off. However, today was different. My bait did not defrost all day, that's how cold it was... frozen meat all day, non eupho! 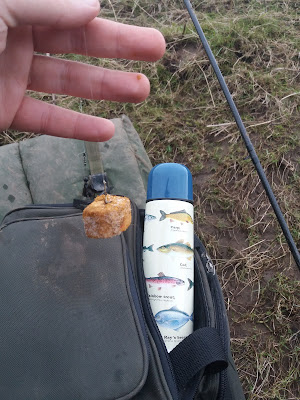 It was cold when I arrived, just before 8am. Firstly I was going to target pike. I had lamprey as bait. It is my go to choice as pike bait. Has also caught me some big chub on the Swale and Tees. 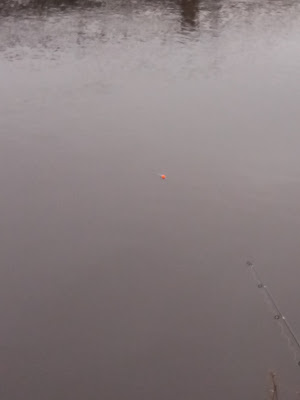 The float looked perfect in the slack water, waiting. I tackled up the other rod, ledgering with a meat spike (bait anchor). Hopefully my cheese paste would stay on this. As my first attempt, it's not quite right, last time out it was not staying on the hook properly and was crumbly instead of a paste.

The float laying flat, suddenly tilted up, then sailed away. I struck instantly, connecting with the fish, I saw it in the water, it looked bronze and did a complete 360 and the line went slack. It looked like a chub, I  put the bait straight back there. Nothing. I inspected the bait and there were small tooth marks across the middle of the bait. It must have been a pike, just grabbed the bait and was not hooked. I have seen the white underside as bronze before, I put it down to the water colour making the white look bronze because of the sediment in the water. I wonder how often we mis-identify? Only   knowing once it's safely in the net.

It was good to be having bites, but in this cold, I needed to be catching too.

I fished on, but with no more interest, I went downstream to try a swim I have caught from before. No pike here, just a huge mud slide which had defrosted by now making it not only treacherous but fun!! No pike though.
I fished on my way back to the car, opting for chub on meat and cheese. The cheese stayed on better, but think that was because it never really thawed. 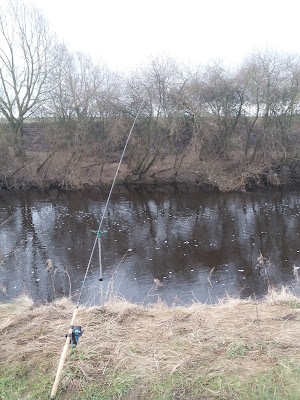 As the wind picked up, I decided to call it a day. Another blank, well a half blank, a bla.

I will be out again next weekend, to hopefully break this barren 2018 start, conditions are tough but I see some fish being caught. Please leave me a comment about when and what was your last fish caught of 2018, if nothing else it will keep me from going mad with the picture close ups!! 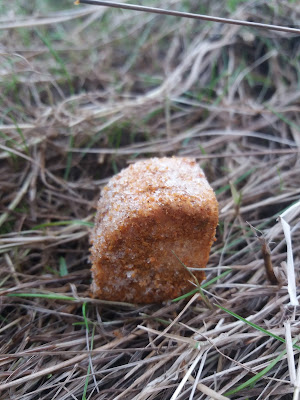 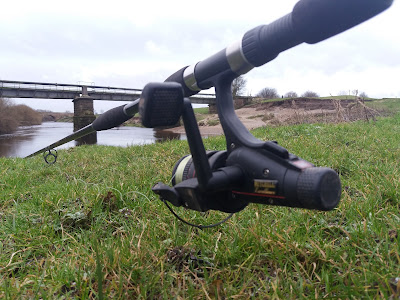