I will start with the result and then describe the day, 2-1 to Ellis.

Ellis and I went to Cundal on the Swale again, to see if we could avenge the New Year’s Day blank. The river had been high but was dropping down and was still heavily coloured. We had planned a different trip, but the conditions were not right so Mother Nature had us changing our plans and visiting Cundal. 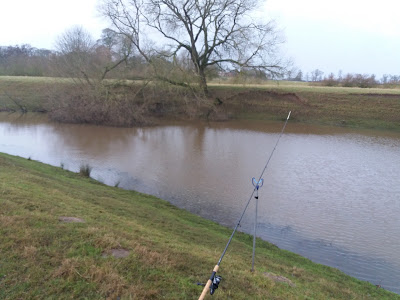 I would be fishing for Pike and Chub (Barbel, secretly) and Ellis was going to have a couple of rods for Chub (Barbel, hopefully!) He was also going to be trying his new Burts on the Oxbow lake, that he had recently bought.
In preparation for the day, I had reviewed the deadbaits in the freezer, ensured the worms in the boot of my car were happy and then made cheese paste!


It was a first for me. I had never used or made cheese paste before, but read many a good article regarding its potency on cold coloured rivers for greedy chub.  The paste looked good and really did tick all the boxes in the “stinky” division.

We arrived at 8am and parked in the first field again, the track was very wet and we did not want to get stuck. Immediately it was different to our last trip, there was 3 other cars! We counted about 10 of us fishing over the day, the most I have ever seen on any river trip!

We started on the Oxbow, Ellis chucking burts whilst I sat behind Lamprey on one rod and worm on the other. No fish in the Oxbow wanted to have their picture taken so we moved to the main river.


Fishing above the weir in a very likely looking area we both went after Chub and Barbel. Ellis was first off the mark with a great slip in his first swim. 1-0 to him. In terms of fishing, he had a couple cracking bites but was unable to connect to the fish, chub assumed.

We continued up the river, chatting to the anglers and trying likely looking swims. The current was strong, 5.5 ounces needed to hold bottom. Here Ellis extended his lead slipping again in a new swim. 2-0 to him.


We settled in a section that had no cover on our bank, but was thick with willows on the far bank. I was looking to present a cheese bait close to the overhanging trees, unfortunately I slipped, falling straight on my bum for 2-1, was this the come back? 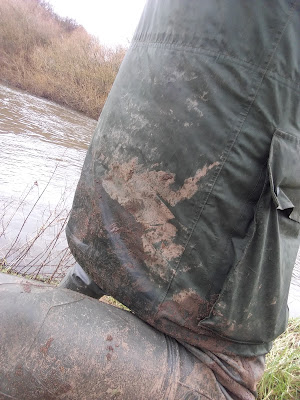 As we fished here, a lot of debris came down the river, noticeably a dead sheep. What caught my eye was how close to the overhanging trees the sheep kept. I had thought the main flow would be in the centre of the river, but the sheep stayed in a near straight line directly under the trees. Is this watercraft I thought? Is this me learning where on a river the flow goes, and where the fish may be waiting for food? Or did I just bang my head?

Further up the river we met an angler who was wearing a life jacket and had a boat strap securing him to a peg in the ground. Discussing this with him, his friend had fallen in last season and been fortunate enough to be grabbed before he drifted too far or became too waterlogged. There have been several articles regarding this in Angler’s Mail recently and it certainly got us thinking about safety on these slippery banks at this time of year.

We walked most of the stretch and found some nice looking swims. Due to scaling down of the tackle, I had to make do with equipment I found or made. I found a whole packet of shot and then had to make my own rod rest, or should this be a bank stick?! 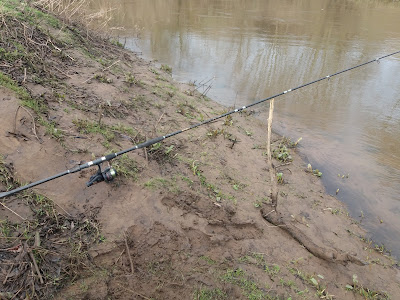 Finally settling in a couple towards the end of the day that appeared perfect. Sat on my hands, watching the river flow past, it was a great end to the day. I sat watching as my rod hooped over, the fish obviously liking my cheese paste. Unfortunately my hands did not move, my brain did not register and I watched the rod spring back to its position.

Approaching 1630 it was time to trudge back to the cars. Both delighted to be going back to work the next day! (not)

Today I was invited to fish a new river to me for Grayling. Chris, CEO of Finygo, the fishing app I use, invited me to fish with him and Harry, also of Finygo,on the River Ribble. 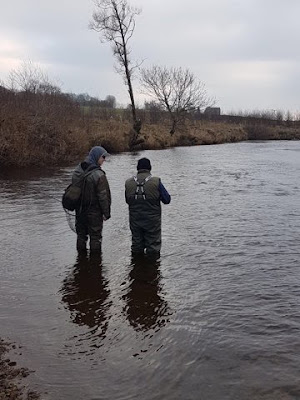 Heading to North Yorksire but down the M6, I was excited to be fishing a new water and chatting with more friendly fishing folk.

We met close to the River and tackled up. I was trotting worm and they were both fly fishing.
Later I found out nymphing with French leader was the method!!

I had a similar set up to the Grayling fishing on the Tees, however I had a small swivel, size 20 between the main line and the hook link. This was to avoid tangles and spinning when retrieving the bait. It worked well and also acted as a small weight down the line. This coupled with a bigger worm meant the bait got quite quickly to the bottom. 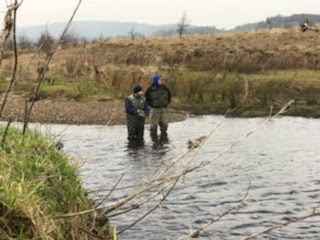 The river was a lot more intimate than the Tees and Swale, in places it was a stream. The water was gin clear and low.  There were many deeper pools but the majority you could still see the bottom it was that clear, which meant the fish could see us. A point demonstrated by Chris fishing from a crouching postion, not quite commando crawling to the waters edge!

The float looked perfect as it went down the glides, unfortunately it never did anything else. We walked the beat, trying many swims. Chris and Harry commenting expertly on areas that hold fish, plotting them on their apps and being contiually surprised by the changes of the River. They explained large areas that had been reshaped by the flow, ever changing the dynamics. 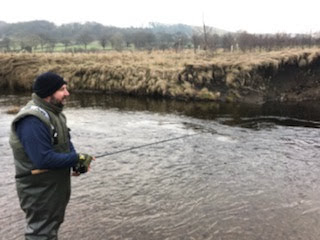 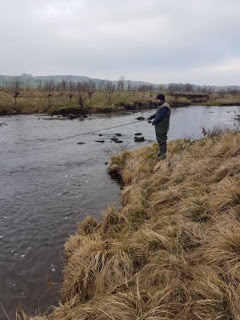 This got me thinking, I needed to "get to know" some stretches of my rivers.

We fished until we could no longer see the float, and then went to the pub for a pint and a chat.

It was great to meet new people and learn new methods. The app continues to aid with analysis of catches and if I can use it to record picture changes to my rivers and meet new people doing it, then we have one very happy user. 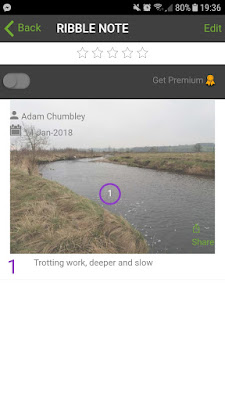 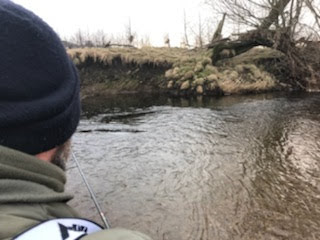 Ellis and I went to fish the River Swale at Cundall Lodge Farm.
I was going to be using the Finygo app again and hopefully catch something so I could record it.

We decided on two rods each, one using dead baits for Pike. We had Smelt, Sardine, Herring and Mackerel.

The other ledgering for Chub using various meats.
I had curried luncheon meat in big chunks, Ellis had Garlic meat in cylindrical pieces, steak and mince. It was turning into "The Great British Meat Off"!!

We had navigated the paying ritual and started down the track to the River. It involved driving through fields, through gates and off road!  In the  summer months you can park behind most swims, in the winter we were advised not to drive beyond field two. We parked up two thirds of the way down field one!! It was so boggy and muddy we did not want to be stuck come 1600.

It was only a short walk to the Ox bow lake, an area of water that was once the river. It was now cut off from the river, waiting for a flood when it would be re connected. Who knew what fish had remained in the lake after the last flood, waiting to get back into the river? 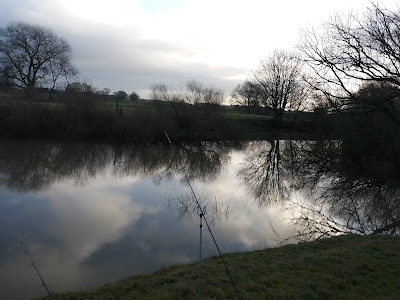 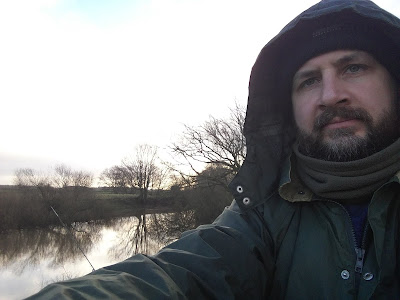 We fished several swims in here, but no fish. There was another angler here, who also joined us with the blank!

We then hit the main river, two metres up according to the river levels gauge.
Several swims were fished, using all baits. The river was high, fast and carried the odd tree down stream. 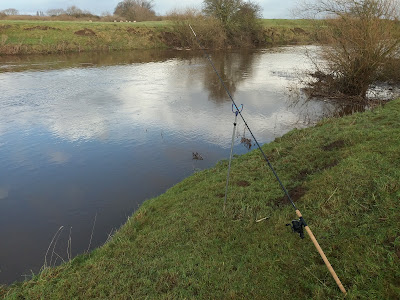 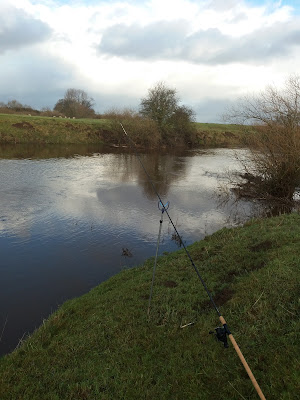 Checking the Finygo App, it perfectly mapped the route we took, which is great for keeping a record of today's trip, but also swims for the future.Although we did not catch anything today, we have the plan of attack for next time. 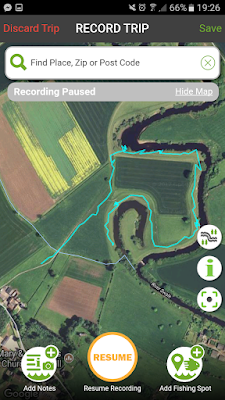 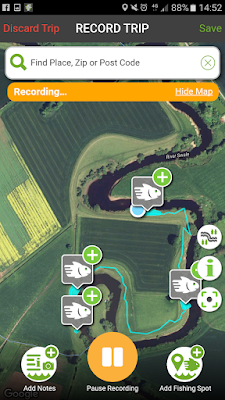 With the banks and track treacherous we walked back to the cars. No slipping over and neither car was stuck, all and all a great trip, with no soggy bottoms!!