Today I was fishing with Aidan on a stretch of the River Wharfe he knew very well, but I had never fished before. We headed to Boston Spa at 6am on a Monday morning, happy that we had the day off work to be fishing!!

In fact, I had never fished any of the Wharfe before and as our target was Barbel, I was hoping for one of these amazing creatures from a third river! We would not be hampered by Chub, Aidan confirming " aye, it's just Barbel in here!"

After a quick chat under an open window in the street, we loaded the car and headed off. The 2 hour journey flew past as we chatted all things fishing. Only stopping to get some Mc sausage delights from Ronald.

We parked up and Aidan got us day tickets for the stretch we were going to target, at £4 it was a bargain! 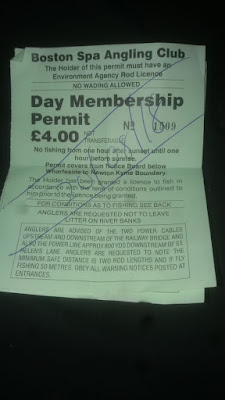 A quick walk along a picturesque path and we were at our swim. It looked amazing, just Barbelly perfect. The river was up a few feet from what Aidan usually has seen, but the colour looked good even though the river was bombing through. 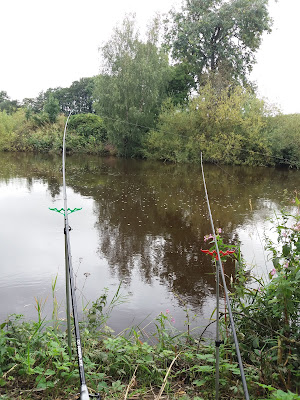 Aidan gave me first dibbs on swim position, I picked the down stream part of the swim and we tackled up. Both of us ledgering two rods. Me using pellets and Aidan with boilies. Aidan was using small pva bags, and he had let me know before, so I too was armed with these. 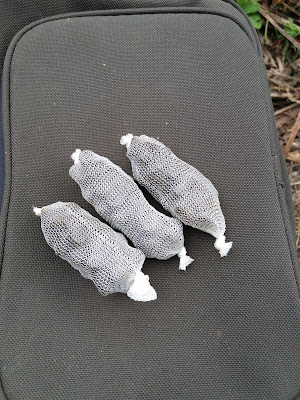 We cast our rods. It was hard to hold bottom with the weights we had. We tweaked slightly, adding two weights, doubling up on baits and altering hook link lengths. Suddenly it all was perfect.

It was about to become even better.
After a few patient hours, Aidan had a "bite" it was more a drop back bite with the fish then swimming towards him. He picked up the rod, wound in and thought the fish had gone. As he wound in, the fish did it's best to pull back!! Aidan was in. A superb looking silvery Barbel of about 5lb was his reward. 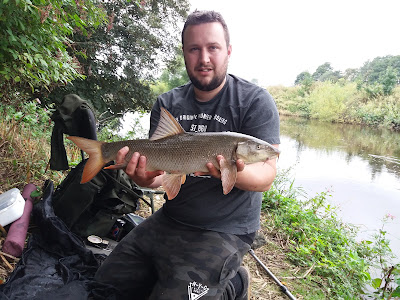 This gave us both the buzz, we tinkered and tweaked. Me trying different baits and pva bagged goodies, Aidan confidently keeping to his source boilies. I had never heard of these, but a quick Google and click and my letterbox will soon be consuming some!!

A short while later as I sat filling pva bags my rod started to twitch, bend over and the baitrunner started singing! I was in. Again, a perfectly torpedo shaped Barbel lay on the mat. At just under 6lb, I was a "three river" Barbel man!!" 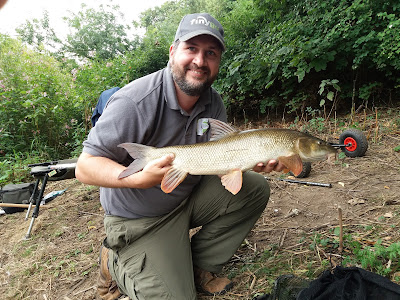 Another angler appeared on the opposite bank and started fishing just below our lines. Not sure if we were encroaching, we decided it was time for a move. The river was dropping and we thought we could hold bottom in a swim we had seen on our walk in.

We quickly set up, Aidan not giving me first dibs on the swim position this time. Very telling me thinks!!

Another strange "bite" on the source, (with these weird bites, I genuinely thought Aidan was on the other sauce!!) and Aidan was playing a . . . . . . . . . Chub!
Just like he said, not in here! It was his first proper chub, and at 3lb 13oz it was great to share this pb with him. His grin really saying it all as he sat down exclaiming "lovely chubley!" 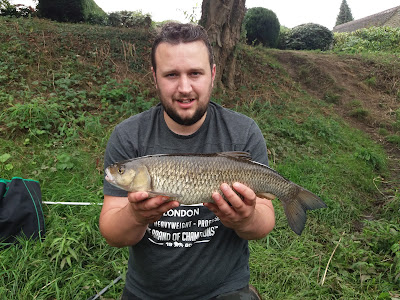 As the rain came, we tried to tempt a few more. Not even Aidans "sauce" was enough...... then a real bite. Aidan watched as his rod performed the famous 3 foot twitch, and he was in again. Another Barbel and we were happy. 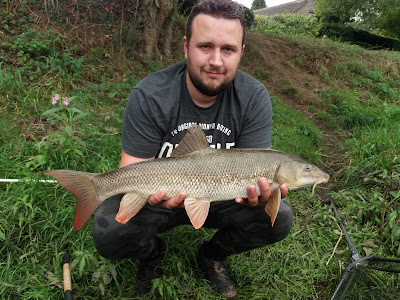 Finally we packed up. A 3-1 home win for Aidan! It was a great day, sharing tips and tales as we hardly stopped nattering. I learnt alot, found some great new tactics and will be sat by my door waiting for my "source" or maybe "sauce" to arrive!