Today I had taken the day off work to take a non fishing friend to do some fishing. Mark (Herbs) had asked before, and I had taken him in winter to a difficult venue, we had both blanked but he was keen to try again!

This time, we went in summer and to a venue neither of us had fished before. We headed up to Felton Fence fishery in Northumberland. I was thinking sun, floating bread and carp, unfortunately it ended up being rain and both huddled under my brolly drinking hot drinks from flasks. It was August after all!! 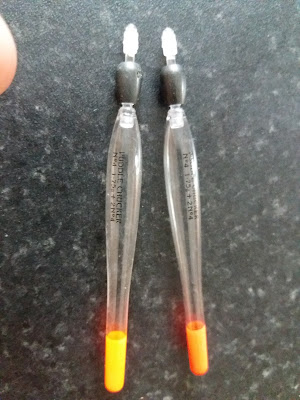 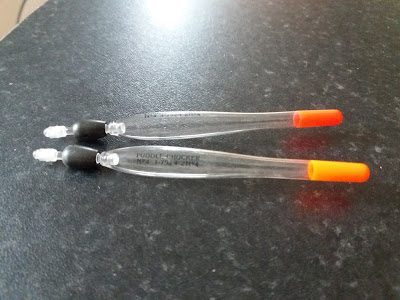 I arrived at 8am and saw another angler just weighing a nice carp of 6 and a half pounds. This pond would do for us. I settled in a swim, put on a new float, called a puddle chucker and started to fish. Feeding maggots, I was soon into small roach. It was nice to be catching. Suddenly the float dipped and as I struck the rod bent double. A much bigger fish had taken the maggots. A quick ping later, and the hook had come out. My smile quickly turned upside down. 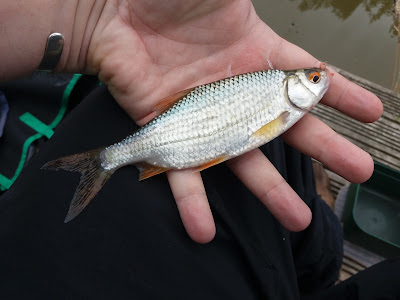 Herbs then arrived. I set him up in a seperate swim with a puddle chucker and pellets in the margins and we both fished on. Herbs suddenly yelling "fish" as a large carp popped it's head out just inches from the bank right in front of him, giving him a stare before disappearing back into the water.

Herbs fished well, but was not lucky. I caught a few miniature perch, and some more silver's. It was fun. 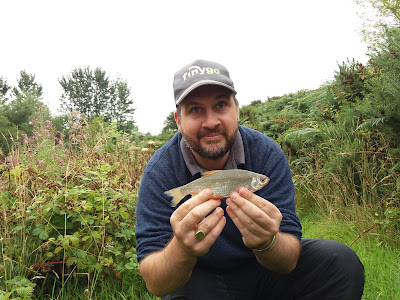 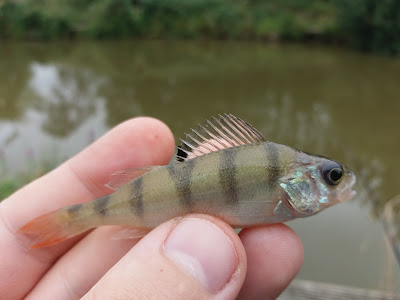 Then it happened. The heavens opened and Herbs had to hurry over and squash under the brolly. The rain was torrential, biblical in its pursuit to drench us. In my opinion, this made the day. We were sat together and able to natter. I thoroughly enjoyed the social side, we were now chatting and catching. We really were chucking in the puddle now!!

I swapped so Herbs could have a go with the maggots, and after a few missed bites, he was in. Catching his first fish, a lovely skimmer. He now had the bug. He was fishing hard, missing bites but smiling lots. Suddenly my ledger rod jumped forward, and a nice little carp graced the net. 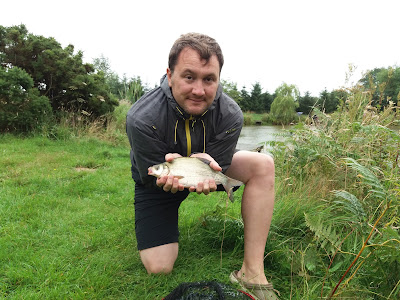 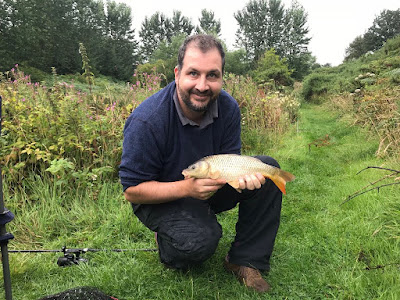 All of this whilst we sheltered from the rain! Then it stopped. The sun came out and we could feel our arms burning!! We stayed in the same single swim, again chatting and fishing.

Soon the sun had the carp cruising on the surface. I showed Herbs how to fish floating bread. We took it in turns to try, as the carp frequently took our bait, unfortunately we missed all the bites, it was a nice end to a good day though.

It really was a great day, the rain made it by making us sit together and actually share it. Thanks rain!!
Posted by Adam C at 11:17:00