Dare to Spin and Drop!

What a trip!! Sometimes you just have one of those sessions. Yes, I saw 3 pairs of magpies on the drive to the river, but this was worth more than triple joy!! 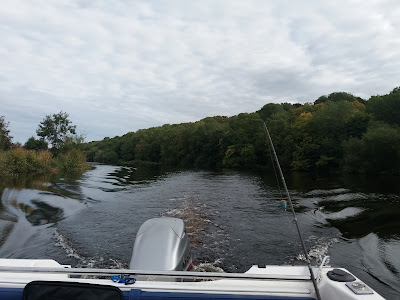 Ellis and I were on board The Big Elbow for a day on the Tees for perch and hopefully pike, but to be honest perch was our main foray.

Meeting at 8am, we were soon tackled up and ready to go. The drop shot king had kindly brought me a spare drop shot set up, so I could hopefully catch my first drop shot fish. I had watched Ellis use it to great effect. It definitely catches alot of fish!

We were soon heading to likely looking areas. This particular area had been on fb the night before, with a 4lb 2oz Perch, this looked likely indeed! Nothing was here today though so we moved on.

We commented how we were starting to really know these areas, but today they all looked different! Not sure if it was the  leaves being brown, or the water level or colour, but it looked more fishy in every swim we saw.
We were soon drifting along the tree lined edge and the drop shot king was soon into fish! A few perch taking the lure, quickly adding to the kings tally. As we drifted over branches, I saw perch attacking my lure and a quick jig later the perch was on board the boat. Neither of us had blanked. Phew.

We fished on, Ellis continuing to catch alot of perch, me just, well, not catching. Finally I got the spare drop shot rod and dropped! It's a great technique, and soon I was catching too. Next was to try a spinner, another method I had not caught on, Ellis also wanted some spinner caught perch! 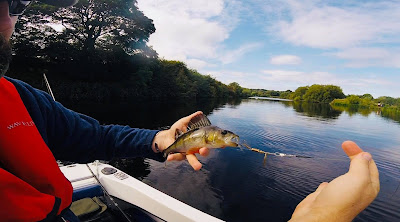 Of course we both soon had spinner perch too, this was becoming a session to remember.
As we drifted along a new stretch, I saw it. A large black hood in mid river. We hadn't drifted downstream and out to sea, but here was Sammy the seal, watching us cast. Sammy was soon impressed as I hooked a nice perch in the margins, quickly landing it, unhooking it and releasing back into the river. We looked up, but Sammy was gone. Maybe the fishing was better somewhere else!! 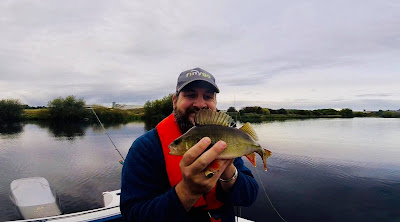 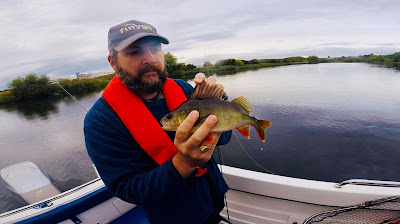 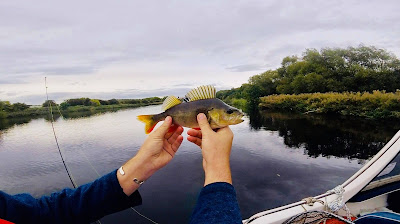 We moved to where the river Leven joins the Tees, expert manouvering from Ellis and we were soon quite a way up the Leven. It was narrow and fishy! Every swim looking perfect. 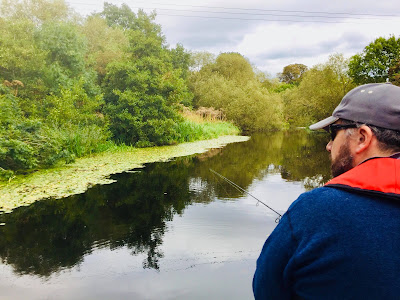 A few quick casts and a few more perch were ours. These fish were very pale, and the markings not very dark. The water conditions in the Leven must be very different! To us, it was just another perfect place to fish. 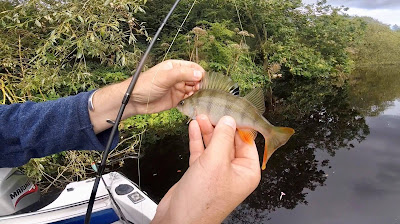 By now we had caught at least 30 perch between us. The Leven mouth was our end point, so we turned round and headed back, keen to try some other swims.

We had noted as we drifted close to the edges, we had spooked fish that were just sat at the edge of the river. I had seen a good sized chub as we drifted over it, Ellis just seeing the boil of water as it was gone. It happened a lot, enough that now our eyes were scanning for movement. As early evening approached, the light slowly declined, something was about to happen.
Drifting, I noticed a fish being chased on the surface. A quick cast and I was suddenly playing the culprit. It was my smallest ever pike, a micro pike, pefection in miniature. A quick pic and it was back. 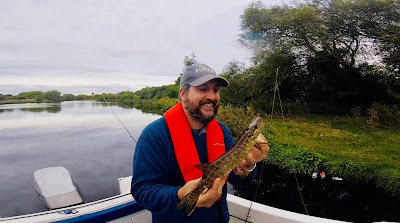 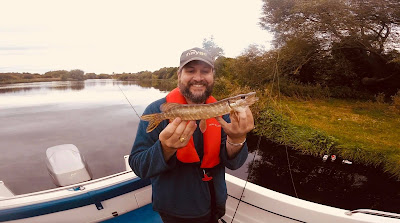 Next cast, another fish, Now my smallest ever pike, a micro micro pike!! It made Ellis and I laugh as we had been chatting about catching a micro pike last trip out at Sockburn. 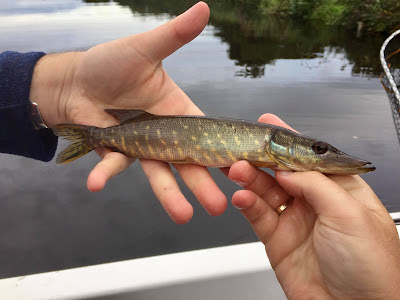 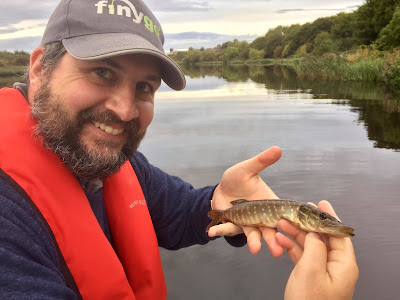 Suddenly there was action and topping fish everywhere, we moved further down, I cast to the splash. Instantly the fish grabbed my lure, a much bigger fish. In an instant, the line was bitten through, definitely not a micro pike!
As I reached for the spinner, Ellis had cast towards another topping fish. He was in to a much bigger fish, "pike" I shouted as it came to the surface. In fact it was a perch, and what a perch! Weighed, so we could get a feel for how big, exactly 1lb 8oz. What must the 4lber looked Like?? 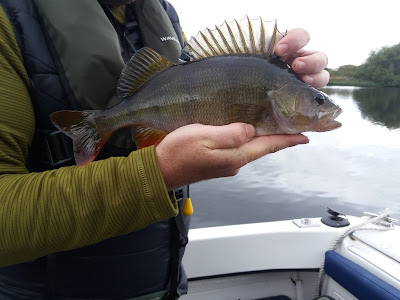 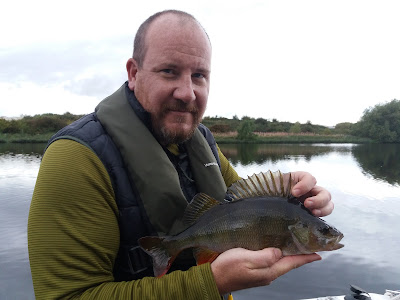 Grinning from Ellis's capture, I cast towards more topping fish. The spinner came a few metres towards me, then bang. A much bigger fish was on. It was into snags, around branches, under the boat, but eventually in the net. My first proper Tees pike! Proper in size, but actually my 5th Tees Pike, I will stop counting them now as it's not a couple, or a few, I am a Tees Pike angler!
Again out of curiosity Ellis asked what weight, I said 5lb, Ellis instantly agreeing and confirming he thought the same. Then to prove we really were Pike anglers, into the sling it went. The needle banging between 4lb 12oz and 4lb 14oz. We really ARE pike anglers!! 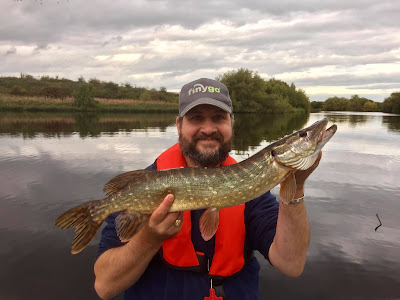 As quickly as the madness started, it stopped. A few more perch were caught as we made our way back, just one more stop. Could we crown this off with a 4lber??

Sadly the answer to that is no. There was no more fish for us. We ended having caught at least 60 perch between us and the 3 pike. We had lost a fair amount of tackle too, we had dared to cast close to the snags, where the fish were living.
We dared and we won, and you know what? We liked it, and will be doing it again!