As I look at my lures, I wonder are they for catching fish or anglers?!?


As you will know, as much as I love fishing, I really enjoy sorting through my tackle. I often get out my feeders, hooks and bits, and re sort them into my bags or on my shelves so they are ready for the next trip.
As I often fish for different species, I like to only take what I need. Although saying that, I always have visions of having Barbel gear on the Swale and seeing a 20lb Pike swim in front of me whilst I only have size 10 hooks and bait droppers!!
I recently heard a story where a friend was Roach fishing and had a huge Pike grab his Roach when bringing it in. He had no Pike gear on him, so had to run back to his car, gather all his Pike kit and attempt to catch the Pike. Obviously we all know how this story ends, so I will not continue..


This weekend, I am not fishing so I decided to sort my lures. I generally have two types; hard and soft. I have always had hard lures, plugs, spoons and jerkbaits but more recently soft plastics. I was introduced to soft plastics by Giles at AT Products and now tend to use them as often as hard lures.


As with everything, it is about confidence of use. I have caught Pike on Shakespeare Big S in Scotland, Fat Boy 110 on the Swale and Vibro shad on the Tees (Perch of course as I have never caught a Tees Pike).


I don't think I change lures often enough, recently when I was fishing with some lure specialists they were constantly changing lures to see what the Pike wanted. I stuck with a few lure choices, they missed 4 fish between them, I had no takes!


I also have thoughts on lure size, bigger is better will spring to mind, however I caught a lovely 8lb Pike in the canal on a tiny pin fry lure, making me think Pike will often target smaller prey too. I don't have many big lures, ones that resemble the size of fish I may try to catch! The large tailed jerk baits or the large soft plastic Roach and Trout are always lures I would like but then I see the price. I think as I develop my lure fishing I will invest in more but for now the below will suffice.


Now I have all my lures out, I will clean them and "service" them. That will entail cleaning off bits of weed and checking the hooks. You will see, most are armed with 2 or more trebles of various sizes and there has been many debates on the use of trebles verses single hooks. I will remove any old trebles and replace them with trebles on the front and single hooks at the back. It is easier to remove single hooks. 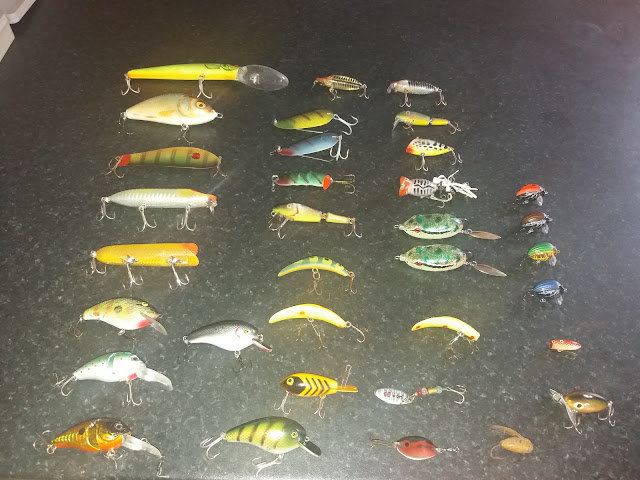 Oh, and of course he did not catch that huge Pike!!!

Email ThisBlogThis!Share to TwitterShare to FacebookShare to Pinterest
Labels: Lure


Firstly I was able to go fishing two days in a row, which I have not done in a long time, really it’s something I would normally do on holidays.


I went to a club water lake to lure fish for Pike. It was a short evening session, 5pm till 21.30. No fish caught but it was good to be fishing at that time of day. Usually I would be fishing early doors and leaving by the afternoon. I was using my bait caster which is the longest I have used it for. I had a few birds’ nests but overall it worked well. I was able to adjust the clutch for the various lure types I was using, and swapped between floating frogs, paddle toads in several colours and my new Salmo Roach lure in sinking.

There is something scary about casting a £10 lure at structures, whilst thinking “I would cry if I lost this”. I am sure I will be less blasé soon and will be flinging it with gay abandon until I actually do loose it! 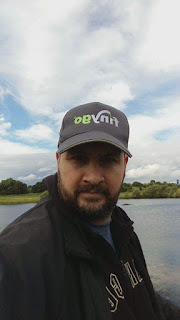 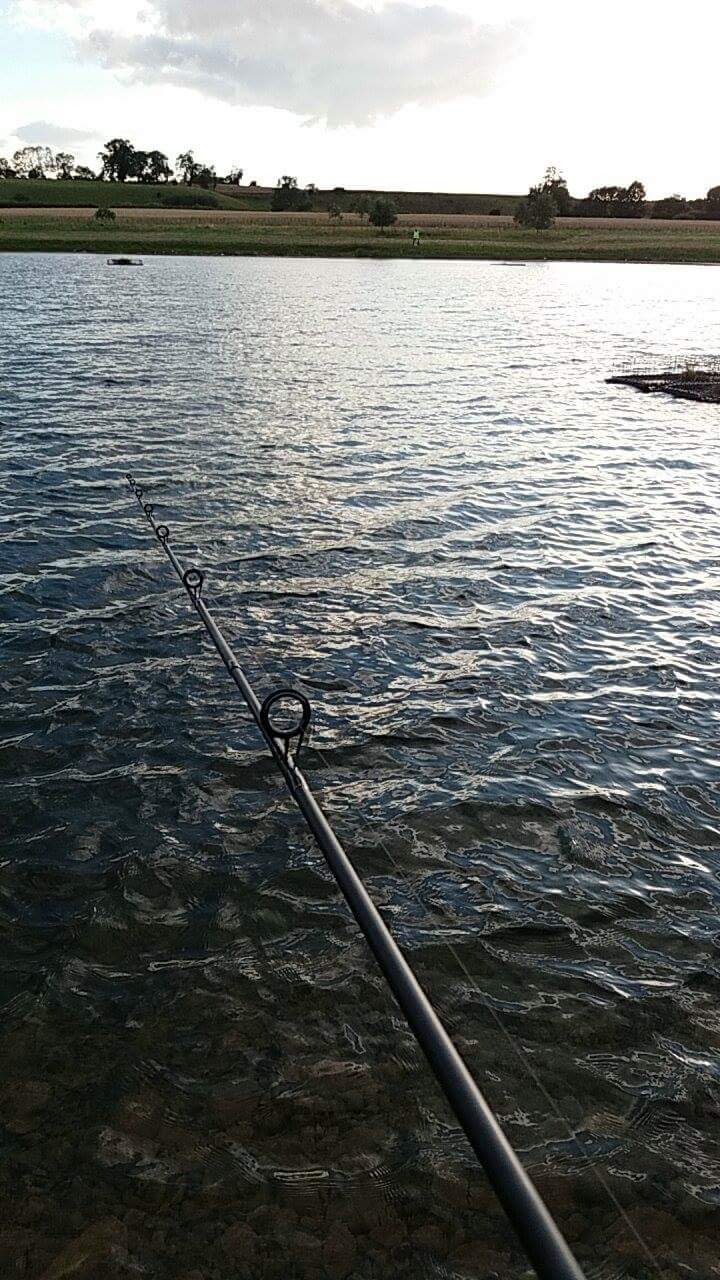 Speaking of losing it, I think Giles from AT Products will still be spewing at the fish he lost late on in the evening!?!


The next night it was a different type of fishing; boat fishing on the Lower Tees, again Pike the target, again no fish. We only fished about an hour as it was an experiment of towing and launching the boat and any fishing was just a bonus. We launched at the barrage and quickly, albeit within a speed limit (Giles’s own speed limit) was down in an area that could only be described as ‘pikey’. Reeds, slow, deep, shelves and wide. All good features. However, the river was a peaty colour and no pike were looking at investigating my frog as it came from out the reeds slowly towards the drifting boat. Having the boat was amazing, three of us were able to cast at likely looking areas easily and just the feel of where we were fishing was enough to ensure we all had a great trip. I do like the feel of boat fishing, there is something about being on the water and it really increases the number of swims to somewhere around the billion mark! We saw a few anglers along the Tees and it really was a nice evening to be out. 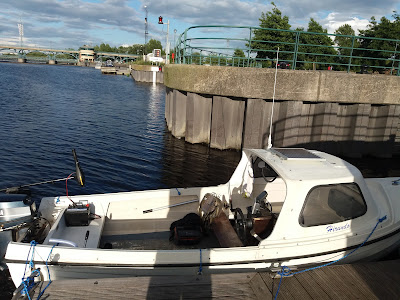 Lastly, I have recently been recording my trips on a new fishing App, called Finygo. It is somewhere between “Facebook for anglers” and that little school note pad you use to record your catches on. 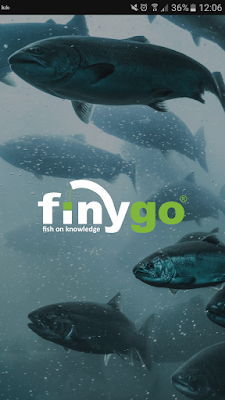 In terms of modernisation, it is great to have an app to record things and not rely on pencil and paper. I have played around with plotting my position as I moved around the lake on my first trip and was able to add comments which will help me later. The Esthwaite trip looks great as it shows I caught 56lbs of fish and achieved new Pb’s. 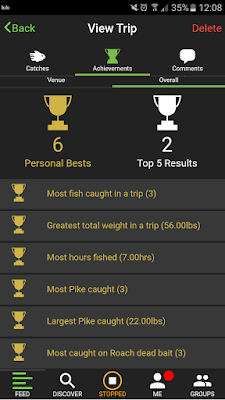 Regarding the sharing side, I am still unsure as to what people will share, as I know all fishermen never “know” where the fish are if they are catching and mostly keep things secret. However, as I type this I have had a look and noticed another angler has shared his comments on a recent trip on the Ribble, and the more it is used the more people will be willing to share, after all there are lots of great magazines which are full or people celebrating their catches.


As I use the app more, I think I will get better used to it, it’s like everything and requires more use to get better. There are some premium settings that allow more and I will need to look at upgrading in the future, but for now I am happy to record it as I go and use that information when completing my blog and reviewing the next time I fish a water. As I continue to use the app more I will keep you all updated....
Posted by Adam C at 13:07:00 No comments: