As I write this now, titled "net for sale, used only once" I think of all the blanks I have had and will have. Its really not the catching that is important, but the doing, trying and being out. I think after I write I may change the title, now lets see what unfolds to determine this................

I was back to Lonsdale Park, this time to target the Tench (Tinca tinca) to be precise. My friend, Aidan had fished here last week and had 5 tinca's to 5lb 9oz. Having never caught a "weighable" tinca, I was up for this. 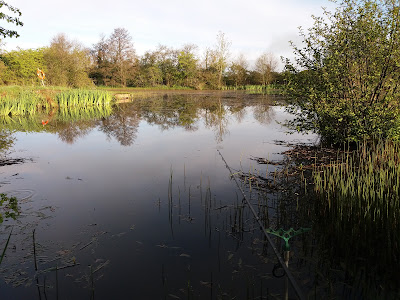 It was an early start, at the lake at 6 something. I was going to start float fishing with pellet and corn. I set the float to fish over depth, with a weight near the hook. I started by baiting a spot near reeds. Bubbles surrounded my float but I caught nothing.
Moving after a tip off from my friend, as in "this swim, this bait, cast here" I continued on the float. This produced plenty of liners but nothing took my bait. It was so enjoyable sat watching the float amongst the fizz and liners, a tinca would have just been a bonus. 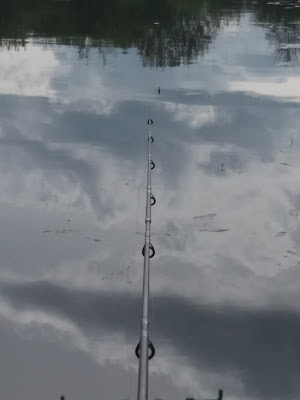 It was colder in the morning, but soon the sun came up and it was hot again. I walked around the main lake watching the carp on the surface. A few casts with bread had plenty of takes but no fish.
I went back to the first lake, again with the float. Same outcome. Plenty of bubbles and liners but nothing took the bait. 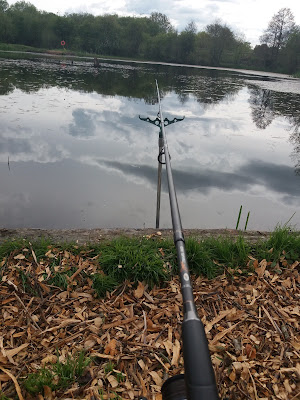 I fished till early evening and then packed up for home. I am enjoying fishing at Lonsdale, gathering info and data, storing it on the Finygo app, my blog and my head. It will give me a history which I can use on future trips. Something I need to develop on the rivers too come June 16th.

In my head it's easier on a manmade lake as it's less changeable than on the mother nature owned rivers, I guess no one told the fish that. They really can be little tinca's.
Posted by Adam C at 18:04:00 No comments:

Today I decided to go back to Lonsdale Park to try and increase my pb again. The weather was hot and with it being a bank holiday, the Lake was a lot busier. When I arrived at around 7.30am the main lake was a bivvy paradise.  The swim I wanted to fish was taken. With a few anglers all looking like they had the middle covered, I opted for a swim where I could ledger and float fish the margins. 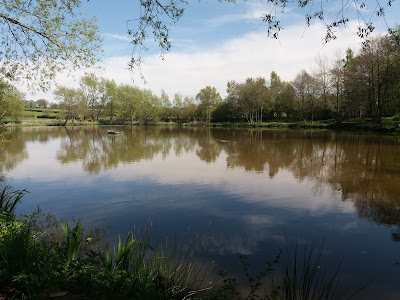 With the rods in, I sat back. Hopeful for bites. Nothing came, I wondered about the pressure caused by all the lines in the water, so I made good my escape and headed for the Lake on the other end of the site.

Although I saw plenty of bubbles around my float fished boilie ( random I know, but I tried it) no fish graced the new net.

It was time to up sticks again. This time another lake. On arriving at this lake I saw three stocky carp, like bouncers drifting around the shallows. After showing them my    I.d, I set to work with trying to catch them. I tried the lot, float fished, ledgered, free lined and bait thrown with no line! They were not having it.

I was on the move again. Yes, back to the first lake, but a different swim. I chatted with another angler who had caught a double earlier in the day. He suggested I try a particular swim. Ignoring this, I sat in a swim close to where I started. 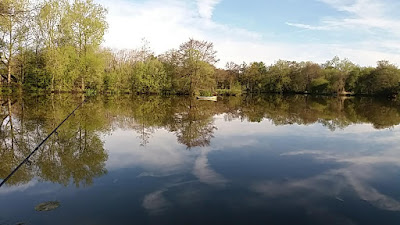 I love the three foot twitch of ledgering and the mesmerizing nature of the float, but my favourite fishing technique has to be surface fishing. Watching your bait while fish swim all around it, is amazing. The problem comes with trying to catch them!!

I tried floating bread. First cast and a fish swam straight to the bait, engulfed it. I struck, not a thing!!
Second, not a thing.
Third, still not a thing.

They were happy to take my bait, but I had missed three quick bites. Now, they avoided my bait like the plague.

I continued in several swims, watching the fish, casting around them. They eventually started to feed again, but again I missed them. It was not going well.

I went to some Lilly pads and this was full of Fish! They were under them, in them, all over the pads. I had to catch!
First cast perfect, engulf, strike, not a thing!!
This was getting frustrating, they were feeding, I was getting bites. I just couldn't hook them. 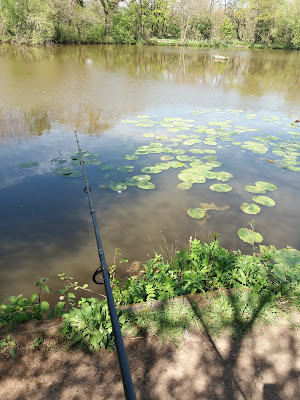 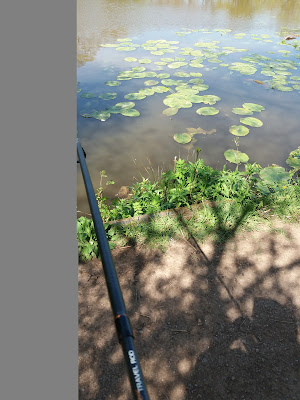 Well done if you have read this far, in this heat the day was getting like this, tiresome.

Suddenly it got good. This time on my strike, it stuck. The lilly pads erupted. I had to steer the carp away from the snags. It was too late, it was stuck fast. I pulled, all the lilly pads drifted towards the bank. Then I remembered, bail arm off and leave it for 5 mins. It worked! The carp was free, quickly it was in the net. The hard work had paid off. 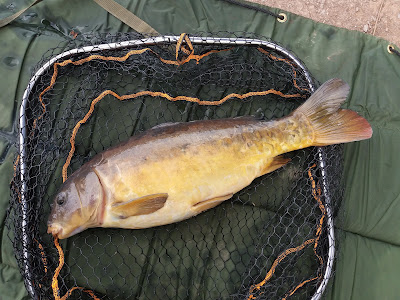 I did not weigh my prize, but had weights between 4 and half and 10 offered. Remember the net is not the xl.
But today I learnt a lesson, "if you only have the large net and its hot and sunny, keep moving till you are nearly back at your first swim!!"
I didn't say it was a good lesson, but it was worth learning.
Posted by Adam C at 20:36:00 No comments: