"Leaf" it for today, it's a school day

Today was tough, really tough. That's it!
It was a fishing test, and as Ellis has just said. Today we paid our dues!
I add that we tried and we enjoyed. 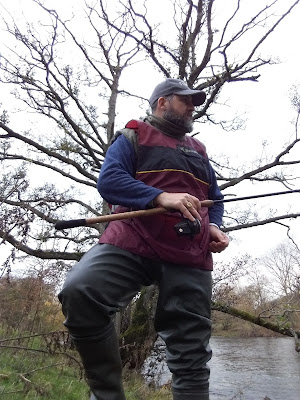 We were back on the Tees at Piercebridge in the hope of Grayling. Meeting at the usual place, I was tackled up and ready when Ellis arrived. Ellis had sourced access to a different beat up stream, so it was on board the motor and a quick drive to a new stretch. On seeing it, it looked a great venue, but the river was high and fast. The over night rain had certainly topped the Tees up. As we looked on, several large trees, branches and debris floated by! Wading was not gonna be an option here!!

We tried a few swims, but really struggled. I just did not have confidence in my ability to trot the float in the same area as my feed. Especially as my feed was probably going miles down stream!! 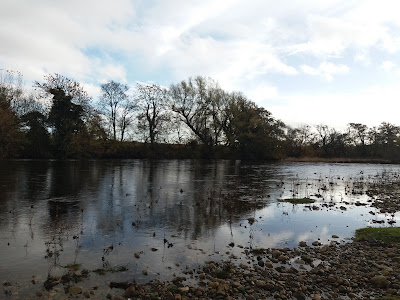 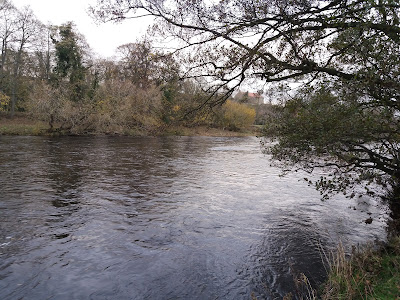 We soon got back in the car, moving to our usual spot where we had both caught Grayling before.
Seeing the river here, gave us a little more confidence. Just! 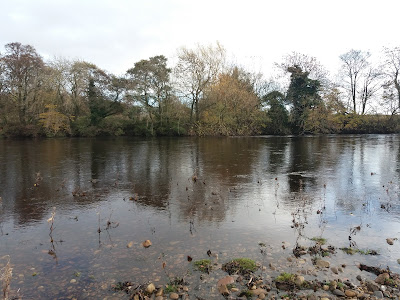 I was soon in the water to wade across the stream to our spot. I went very carefully as the stream (actually a side of the river) was alot faster and deeper than normal. I assume Ellis stayed back to check for my safety, but more of that later!

We were soon on the island, a quick jungle walk later and we were fishing. We carried on feeding and casting, soon getting into a rhythm. Standing almost back to back we were trotting in a similar area and kept the feed going in. 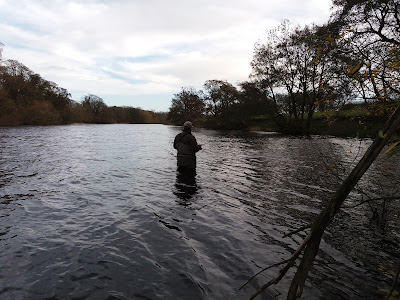 Soon it was time to move on, if for no other reason other than to warm the parts of our body below the waist that were now freezing!
We usually took a different wading route out of this area, but today thinking it may be too deep, we thought about a different route. Ellis suggesting he might try the deeper route.
I replied, "ok, but let me get ready with my camera in case you get washed away, it will be a great photo for the blog"
Ellis promptly replying " that's funny cos when you were going into the stream, I turned my go pro on to film you if you got washed away!"
At least we were on the same page with water safety!!! 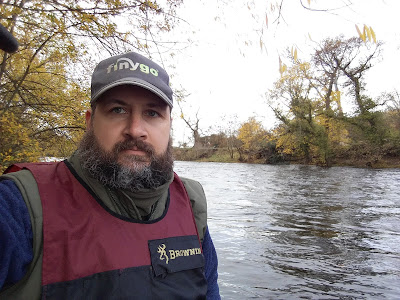 Finally I noticed the river was dropping, perfect for tomorrow we noted! By 12 o clock the routine was back and I was confident with the feeding and casting and it was coming together. My skill was soon rewarded and another leaf was landed. 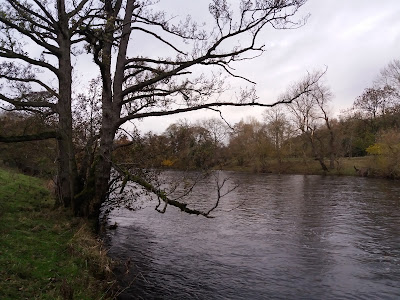 The knowledge was infectious and soon we were both listening to "how to" guides and venue tips and tactics that had Ellis wishing he could remember it all!! I think the peg number 35, 37 and 38 came up alot matey!!

As the angler left, we obviously jumped into his swim. Ellis with basically the same tackle, as he had swapped it all! We fished on. Laughing to ourselves, and smiling fondly.

We worked our way back towards the cars. No Grayling today, but we left happy and alot more knowledgeable. Sometimes it's good to take stock of how you do things, it's not wrong it's just different!

I never did ask the guy how he would deal with a friend being swept away in the river, but am sure the right answer would be "well hopefully capture it on film!!" 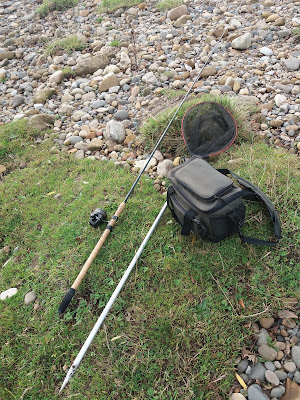 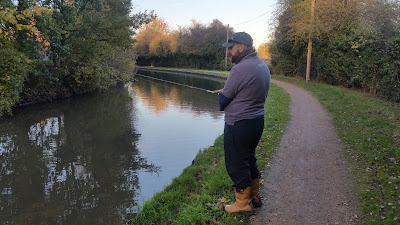 A is for Anthony, who was kindly taking me fishing today.
B is for blank saver, a 4oz perch was mine! I....
Caught it from the
Canal.
Drop shotting was the most prolific method today, as usual! I tried it again.
Electro fishing had been used 8 weeks before, had this removed all the....
Fish? We wondered, Anthony had some tricks to use though....
Garlic pens, shhhhh! It's secret
Haunts on two canals we tried. Anthony knew all the stretches like the back of his hand.
I had dead baits, small roach to try too.
Jigs were used, but to no avail
Knowledge is key, so will be updating my Finygo App
Lesson learned, slow retrieve, almost to a stop.
More practice is needed on my drop shotting technique.
November Day? It was sunny and bright
Obviously as Anthony had said there were only a few in the stretch, his first fish was a lovely looking
Pike. 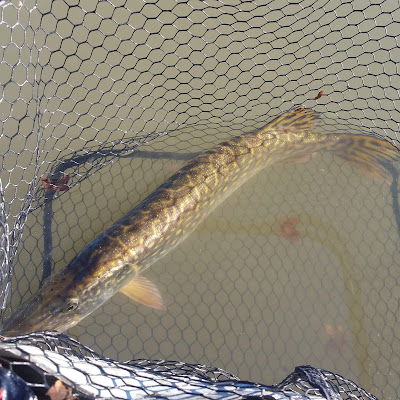 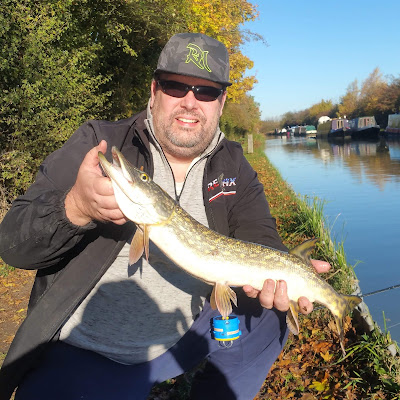 Quietly we crept along the canal, trying likely looking spots, only a few feet from the bank
Repeating this at bridges, boats and under over hanging trees
Stonez from Pallatrax were used instead of leads. Have used them a little before, but gonna give them a whole season and see how I get on
Two quick bites, I missed, but we think these were by perch. Anthony ended on 5 perch, some nice sized ones, and lost a bigger one. 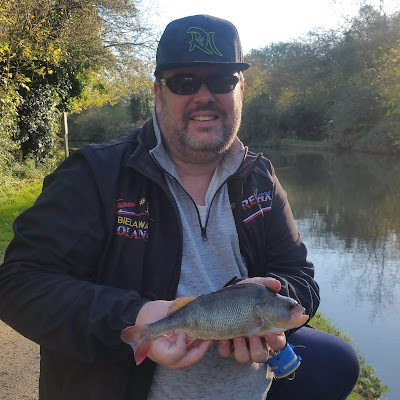 Urban fishing at it's best on these
Venues, Ashby de la Zouch Canal and Coventry Canal 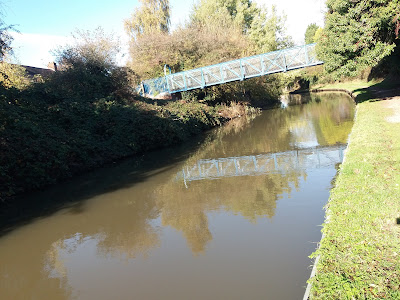 Water was a good colour. Not like chocolate, that it sometimes resembles
Xpertly (ok, well we did not play any xylophones!) I worked the lure along the bottom,
You must be joking, I shouted as Anthony finally hooked a...
Zander. They were the main target today, and although I didn't catch one, I saw Anthony catch one and had a great day trying! 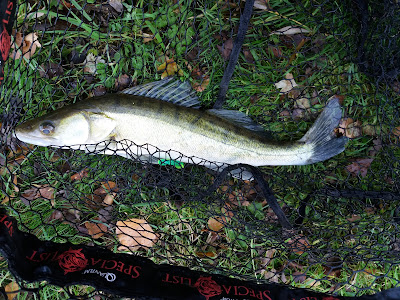 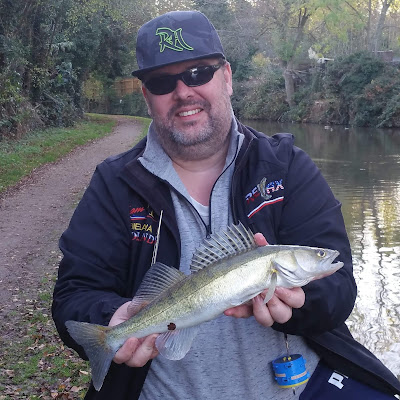 After a plentiful breakfast, 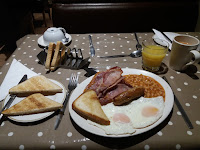 day three of the epic fishing trip saw me and Ellis head to the canal at Pollington. Perch and Pike were the targets, but having not fished together since September, we were due a prattle too!

Deadbaits set up as the rain started, Ellis taking shelter from the precipitation by going under the bridge.
I cast the bait in and waited patiently. The second rod in my case was a spinner or small jig, Ellis had spinners, small jigs and of course his ever faithful drop shot rod!

First retrieve has nothing to report, the second however, pow! Fish on. My spinner, being preyed upon by our first P.
A Pike being my prize, for a well positioned spinner.
I don't think Ellis had got out from under the bridge yet!
A nice start to the day, let's hope it was the start of something more productive. Excuse my pinkies! 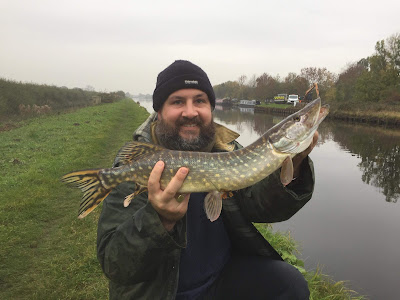 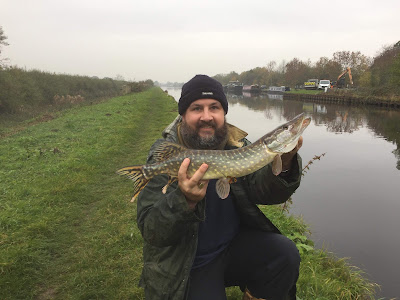 As we carried on fishing, Ellis went back under the bridge, but this time he was armed. A quick flick of the deadly drop shot and he was into our second P.
A perch being his reward. This fishing play was getting easy...

As we made our way up towards the lock, we carried on with the deadbaits and lures. Opting to fish up by the moving water by the lock. Ellis continued to catch perch on the drop shot, now expertly doing the drag shot technique!
Around a large boat, Ellis managed the pick of the day, this perch easily going over a pound. 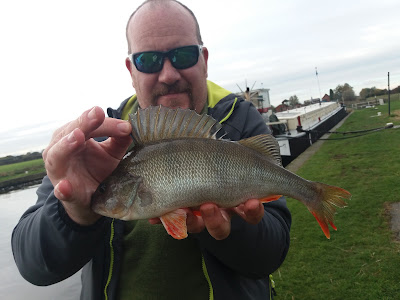 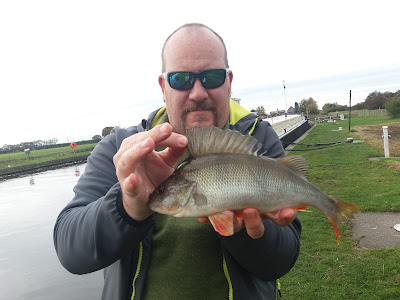 We then went the other side of the lock, managing to avoid the poo as we fished along the path. Ellis having a follow from the deep, into the clear shallow water from a perch         " double the size of that big 'un".
This fish giving us some more motivation, proclaiming " I am not leaving till I catch a perch" quickly followed by Ellis " I'm not leaving till I catch a pike!"

We continued towards the bridge, chatting with other anglers that we met. We saw a few splashes, presumed pike. But none were in the mood to see us.
As we tried and tried, Ellis perfected his line clip use. Expertly casting to within an inch of the far bank over and over. Next, Ellis reviewed his dead bait collection, proclaiming it was all for the bin and a new lot purchased very soon.
Soon the last cast was upon us, Ellis continuing with his expert cast, however this time it was a foot into the field on the far back! A quick walk around to rescue his float soon followed, only made worse by my laughter of the expert cast!

I am sat in the pub writing this, hoping you are wondering what the third P is? Well, it's obvious.
It's not pals, perfect, painful or panic! It's plonkers!!

Let me tell you what happened, that I left out of my story.
My dead bait float was up near the lock, I was stood with the spinner, explaining to Ellis that spinning was not good at this height from the water. He listened and nodded as he drop shotted. Suddenly my float started to move towards us, a slow movement, but then going underwater and sailing away. I dropped my rod and actually ran to my rod. Ellis winding faster on the drop shot to get the net. Just as I picked up my rod, Ellis pronouncing "haha it's me!!!!" He had caught my line and was creating the bite!

I am proud to say, enjoying my fishing like a plonker, makes me happy, especially as gnome does not start with a P!!! 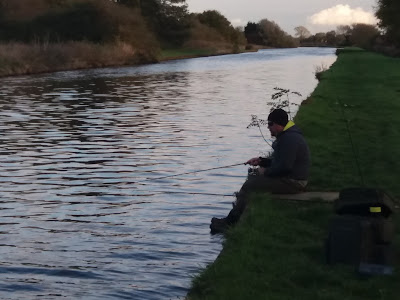