Dorset was the scene, August, summer holiday with the kids at my parents house. Perfect for a spot of pole fishing with Rupe and Sam, neither had used their new weapons and as 7 year olds should be, both were eager to try.

3 generations of Chumbley loaded the car and set off to buy bait. 4 pints of mixed later, after all we would be filling in now!, at half price, don't ask, and we were ready. We met sam at the venue, UK Llama in Mosterton, paid, provided our rod licence numbers, which we agreed was a good thing. There is often the debate about venues or tackle shops "checking" licences as a means to keeping our sport regulated, and I don't think its a bad thing.

We walked past the Llamas and saw the lake. WOW!!! It looked amazing. Only 5 swims in a pond about 70m long by 35m with a small island in the middle. Lots of bank cover, various depths and each swim had a wooden platform and space for rods and kit. 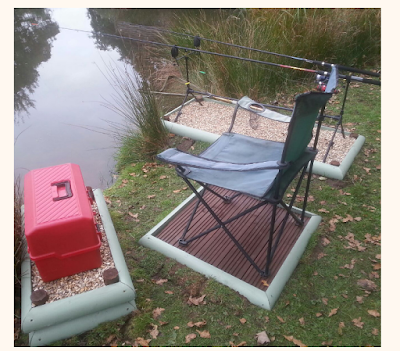 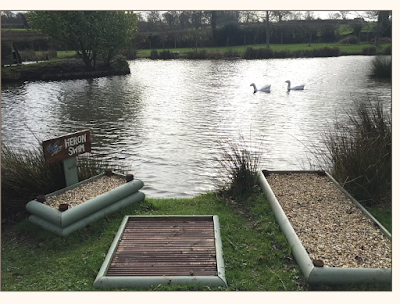 It really looked lovely. We were told it contained Rudd  Crucians, mirrors and commons to 18lb, Tench, Chub, Eels and Golden Orfe. We had maggots for bait, so started "filling it in". 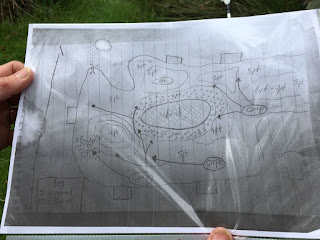 Rupe started on the whip and Sam on his rod. They were soon catching Rudd every chuck and loving life. I continued with the feed, trying to entice larger fish in. Am sure they were there but it was hard to get through the small stuff. The more handfuls that I applied, the more swirls where happening. Soon Rupe struck into something that was not 4 inches long!!!

After playing it superbly on his whip with a little help from daddy, we slipped the net under a lovely Golden Orfe of about 3lb. Rupe was so happy to catch " my biggest ever fish, daddy" 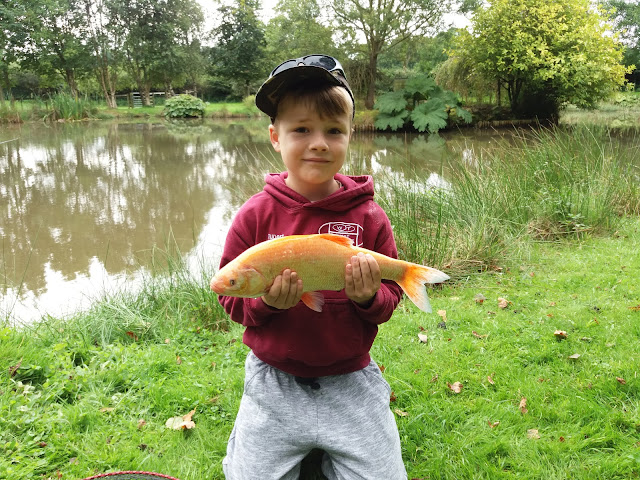 Sam immediately suggesting he would like to use his pole now too!! I rigged him up, with a ready made rig that had the pole  float upside down, strange I thought, and removed it to change later in Munchkins (My nan) room later with a few beers. I set Sam up and left him fishing with Gramps, as I went back to see what Golden boy was doing. Soon, after another thousand small Rudd  Sam was squealing with delight as a huge snake thrashed under his pole. Ok, it was an Eel, but he is 7. After a great battle on his pole, the strong swimming Eel was in the net. I have caught many Eels before and their strength always surprises me. This one was no exception and a lot bigger than the ones I have ever caught. It was soon unhooked, and after showing it to the man who had dug the lake back in 2000, it was off on it's way. 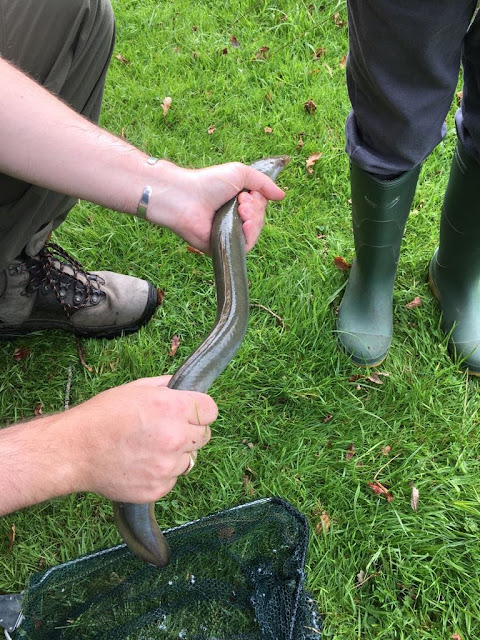 We now needed lunch, a good few sandwiches, crisps and chocolate later we were back to fishing. Again we all fed heavy. Rupe had begun putting on his own maggots, albeit impaling the hook right through the middle, and he actually liked throwing the maggots in. Sam was unhooking and returning fish himself and Davey was fishing in his normal way, one eye closed!!

It suddenly got very dark and hot as we watched some people walking Llamas around the lake towards us. They had been on an experience to walk the countryside with these unusual looking creatures, the Llama I mean!!
Then it started, rain and I mean RAIN.
It was torrential, thunderous. As I shouted for the boys to go with Gramps under the tree, my rod bent over and the spool sung a jolly scream. I was stood in the pouring rain playing the best fish of my day. Quickly, due to the rain, it was in the net. A lovely looking Carp that the boys thought was huge, it was, compared to the days Rudd.
All that was left was for Davey to visit Specsavers and take a pic.... 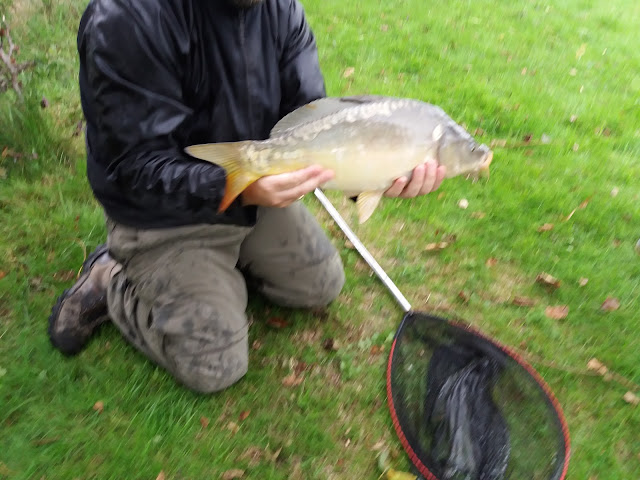 Don't think Chappy will be worried about his job at Anglers Mail.

As the rain poured, he kept trying and eventually got lucky 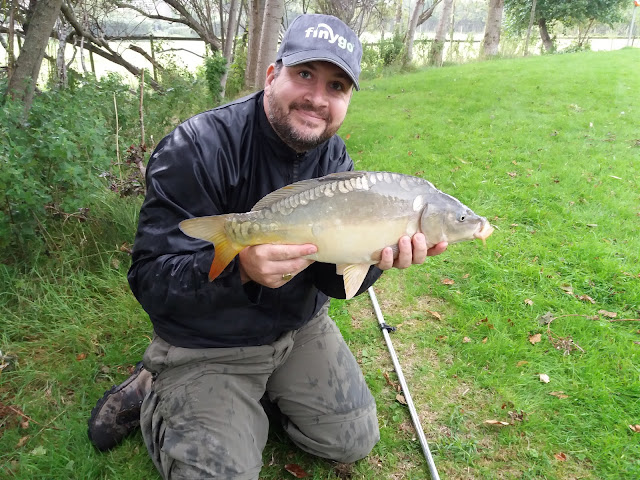 When the rain stopped, we packed up and headed for warm drinks. A successful days fishing that showed all ages can enjoy a day on the bank, but not take a good photo!! And it only took me two beers worth of time to sort the pile of tackle the three of them left!

The Gospel according to Me

I am sure many of you will think you have read this article before, but you have not. You have read the original, albeit told by Mr Collett in Anglers Mail over 4 glossy, picture clad pages, this is my version of events.


We will start at the beginning, March, e mail, You have won a days fishing with Steve Collette!


OMG!!!!!!!! Pleased?! I was ecstatic, it actually made my year! Next thing I know, the legend that is Steve Collett (Two times British champion, European Champion, Division one Champion, regular columnist in Anglers Mail, 6’2 of fishing hunk and a big head) is e mailing me arranging to set up the days dangling.


Due to work, life, weather and other commitments the date was arranged,  Wednesday July 5th, the venue Whitmore Fisheries, Preston and the target Barbus barbus


The day finally arrived and after a quick 2 hour drive, I was in the three lane queue outside the fishery. 8 am sharp, the gates opened. I parked up and waited. I saw a face emerge from a car that I instantly recognised, it was Chappy, angler, photographer and sidekick to Steve’s writing skill, he may argue the butt of Steve’s writing jokes too!


After a few mins chatting with Chappy, I already had a feeling this was going to be a great day. Steve quickly arrived and straight away we were chatting, Hexham, Northumberland, Southern accents, Ascot, Star Letters, £100 were all quickly discussed and seemingly Steve was taking all this in for his article. It was clear quickly that his and more so Chappy’s knowledge of waters around the country was second to none. Chappy was listing waters close to me that he had fished before and no doubt had clear images of the swims that produce and the tactics used.


A quick stroll, phone call and swagger into the tackle shop resulted in an armful of bait, and I mean armful! Swims were set aside for us in an already packed fishery and we were going fishing!


We tackled up, Steve showing me the GURU micro lead clip that I had bought but not used yet and providing me with a small weight, ( that now resides in Northumberland!!) as I had nothing suitable. Steve started to fill in the lake. Barely 6 inches from the bank went pellets, casters and dead maggots. The perfect amount, about 6 bags!


Worm on the hook, and I was fishing. The swim was alive with fish, I could see tail patterns, huge bow waves and small fish scarper when obviously larger fish moved over the feed. It was not long before there was a tap on the rod tip and I struck! Boom. Fresh air! Not a thing, but flying tackle. A wry smile from Steve, saying "that was  a savage take, next time wait for the fish to really hang itself”


I knew what he meant, and next time I would wait. I did look a bit of a wally.


Soon the rod wrapped round, two foot twitch and all the clichés, I was in. I played it like a dream and soon my nets man aka 6’2 Brummie had the fish in the net. A nice looking carp. Steve informed me we would need to catch a few of them before the Barbel came to us. We filled the lake in some more!


A new worm was baited and off we went. The rod wrapped round again, this felt different, strong and keeping deep. Finally the net was skillfully swept under my first Barbel! About 4lb of perfectly looking and pristine Barbel. I was overjoyed.  As with all photoshoots, next the pics came! Hahaha. Angles, faces, points and gestures. It was amazing to see Steve and Chappy working to already develop the article. 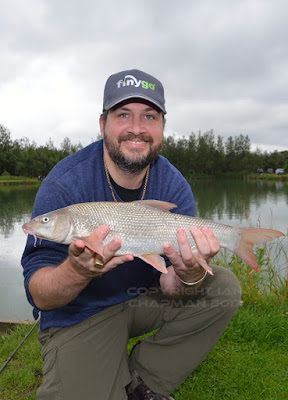 Worm out, fishing, rod wrap around, Barbel. This continued for 4 fish until finally a magnificent fish of about 5lbs lay wet on the mat. This fishing was amazing, 20 mins had passed and I felt like  I had emptied the lake of the Barbel. 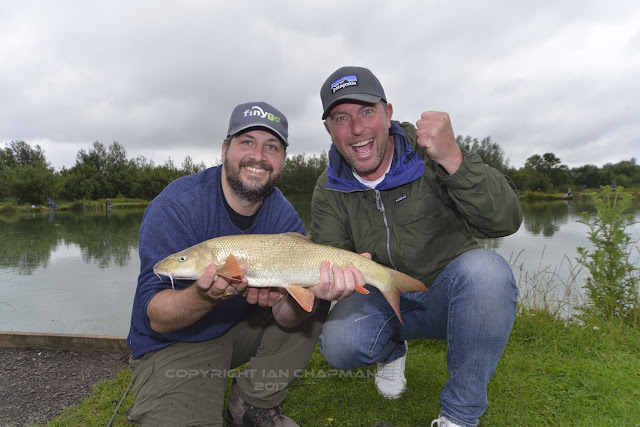 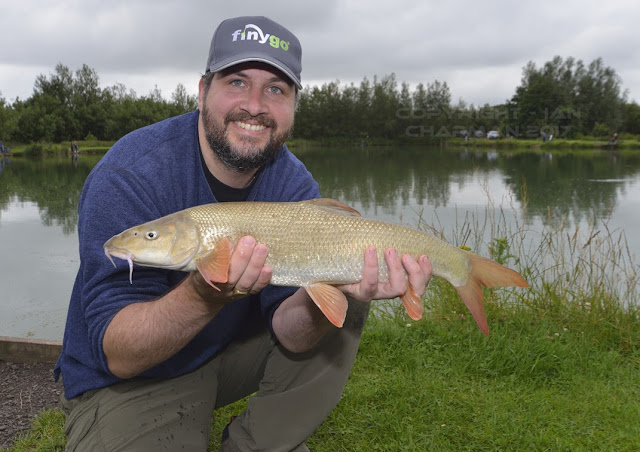 We decided it was time for breakfast, so off we went to the Café. After much hilarity, butties and chat we thought we had better do some more fishing.
We were straight back to it, Steve instructing me to "fill it in" and catching more amazingly perfect Barbel. This time it was different though, I only caught small Barbel which were so perfectly proportioned to their older relatives and Steve did some fishing...
I was to be the nets man now! Steve quickly caught a nice Chub, Ide and Barbel, this guy could really fish, I thought!
After a short few hours of catching quality fish between us, it was time to go Christen the Coliseum! This was to be different, catching on the pellet waggler, oh and I was to be using Steve's tackle, oh er Misses.
We were told that there was only Carp in this lake, so we baited some likely looking areas around the edge but also fired some pellets in the middle to catch them on the drop with the pellet waggler. By now the sun was quite hot and the Carp were easily seen on the top, taking all the pellets, crashing around and generally giving us 2 fingers as they ate everything but my bait!
After a while and change of tactic, fishing the pellet on the bottom and feeding micro pellets quite heavily, my float dipped and sailed away. Playing the fish on someone's else rod is different, granted Steve's tackle is better than mine, but I always think it feels weird using someone else's tackle, anyhow enough of that, you know what I mean!
We all wanted to see this Carp that lay in the net, amazingly it was a Barbel!! It would seem, now, after having never caught a Barbel I was a supreme Barbel hunter, catching them in a lake devoid of them.
We carried on fishing and a few smaller fish followed, soon the tails in our swim got bigger as they waved at us, heads down feeding on the pellets. This was such an enjoyable time, we were all chatting, telling stories, I think Steve told some Jokes, if you can call them that, it really was what I would call a social fishing trip!

It was almost a surprise as the float disappeared under the water and this time it was a nice Carp. What followed was something akin to Benny Hill meeting Monty Python. We had commentary throughout from Steve and Chappy, we had the fish caught on floating debris, we had a broken landing net and plenty of laughter and smiles. 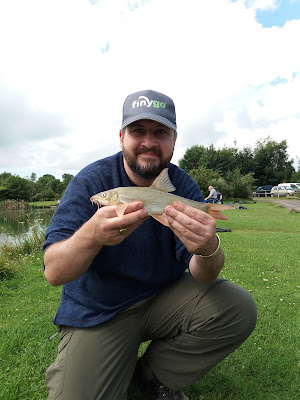 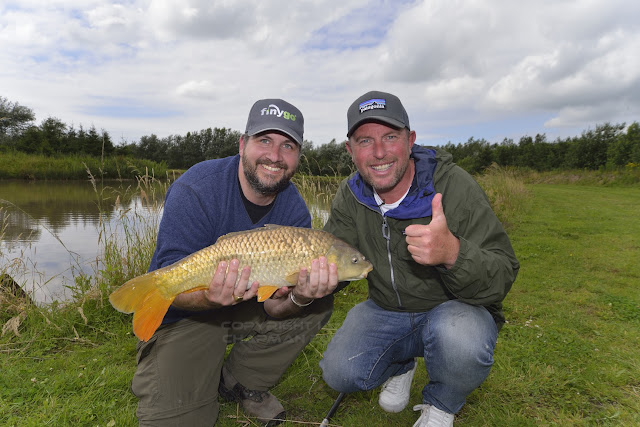 I am sure you can see in the final picture of me and Steve with my prize that we all had a great days fishing, making friends and enjoying the hobby that brought us together, albeit due to correctly knowing Steve was a "lure fishing champion" in a magazine competition.
Thanks guys, I really will not forget this trip.