After this morning's 6am wake up call, Davey and I headed south again. Today we were meeting Ellis for a day on Big Elbow. The target Perch and Pike. We were going to use lures but also try using live bait for both species, that we were gonna to catch using maggots in the same swims. Simples. 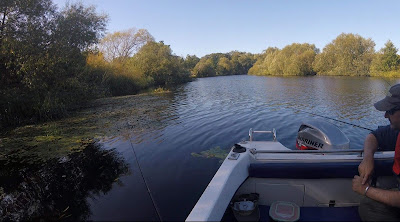 We set off and headed for our usual spots. The first one, Disco corner, did not produce a thing. Uh oh.
We headed on.

Plenty of rowers (maybe 20) came and went,  Davey found alot of snags (maybe 20) but no fish. We were soon at the mouth of the Leven, we would give it a go here. Davey got into the routine of casting and slowly retrieving the lure. He was lure fishing!

Trying for bait fish first, it wasn't simples. It was slow. We had nothing so far.
Throwing in a few (maybe 20) maggots at a time, and finally Ellis caught some small silvers and the plan was put into action.
My float bobbed and I struck, I thought I felt something but we were all not convinced. 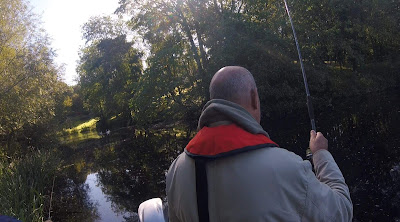 It was time for lunch. Doing the civilised thing, we all stopped, sat down and ate lunch. I had left my rod, cast under a tree. Now, my float did bob, and sailed away. I struck and was in!! Quick as a flash, it was off. The single hook not taking hold. Quicker than the first flash Ellis cast his rod close to where I had been. Now when I say close, I mean in the tree, not under it!! And that's where his rig sat until we finished our lunch!

After a few more biteless  minutes (maybe 20) we left the area and headed downstream. We would try some old haunts, but find some new ones too. *spoiler alert* some of these new haunts will be regular haunts me thinks!!
My float started to move and it was soon gone! I struck. I was in again. This time I was in properly and was soon playing a fish. A few seconds later (maybe 20) the fish was off!! Zero from two, this was getting personal!

Ellis then caught a fish for live bait, he quickly hooked it to cast next to my float. As he cast, the float did land next to mine perfectly. Unfortunately the fish came off mid flight and landed in the river a few centimeters in front of the boat (maybe 20). We laughed!
A few more failed attempts to catch bait and we were laughing more.

Eventually Ellis gave up with the live bait and turned to the drop shot. He caught a small perch straight away, thinking this may be the only target species of the day, I had to take a picture for the blog! 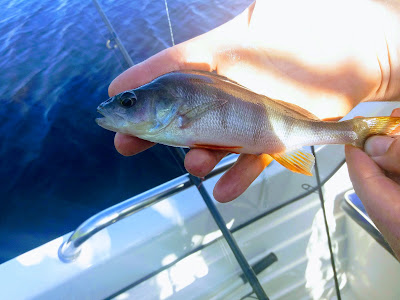 I needn't have worried as no sooner had he put this perch back his rod was bent double, he was in! A great battle was about to happen. On light drop shot gear, a large Pike was soon taking line. The hook holding in the scissors far away from the sharp teeth. After a few long runs (maybe 20) Ellis pulled the fish over the net. I scooped it first time and we were all happy.
I was sure it was a double and gave Ellis 10lb all day long. The scales had other ideas and it finally settled on 9lb 10oz of pristine Tees Pike. A lovely long fish powering away strongly, made me wonder. Was that the one I hooked a few minutes (maybe 20) before?? 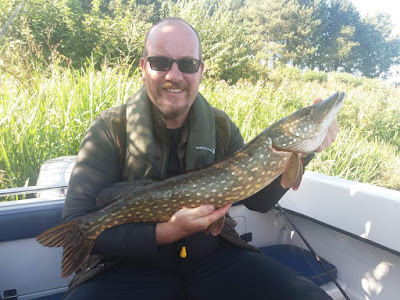 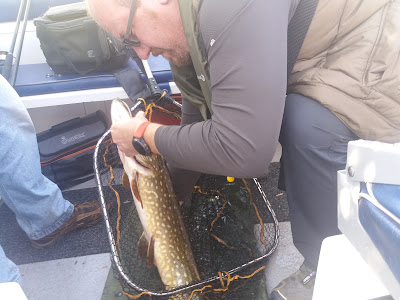 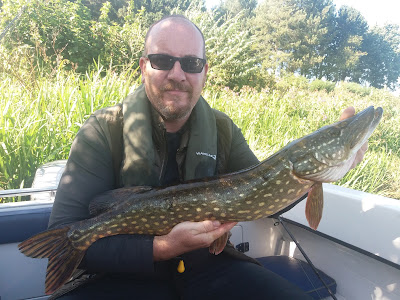 High fives all round, we headed for another swim. Ellis catching some quality Roach and a Roach/Bream Hybrid. 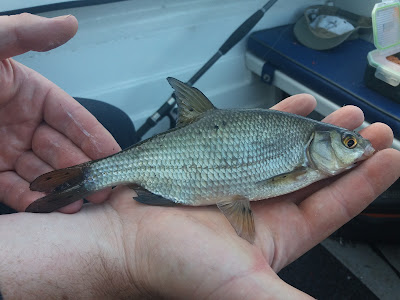 We had to wait for some smaller fish as live bait, as the quality Roach were slipped back into the depths. Soon the livebaits were back out and ready for fish. This time it was Ellis's float that bobbed, and disappeared. He struck and was in again. Calling for the net, it was battle stations. This time Ellis was not on the light drop shot rod, he was on strong tackle, wire trace and powerful Carp rod. This fish was strong, Ellis's rod was soon bending as the fish made it to some lillies. Holding it out of the snags, the pressure was too much and the line was caught on roots and going at a different angle. Where the line entered the lillies Ellis was gaining line, but suddenly the worst happened. The line broke, it must have been frayed on the snags as a large fish swirled some distance away from the lillies. The line was obviously going in a different direction, caught around something.  Gutted, we sat and stared at the water.
Eventually we moved swims.

A few (maybe 20) more casts in a few (maybe 20) more spots on the way back and soon we were in the last swim. Here I finally managed a couple of Perch and Davey hooked one but lost it. He was happy that he had finally hooked a fish on the lure and was not snagged! It was a great day on the boat, and Davey enjoyed himself. That's fishing, and that's the main reason for going. 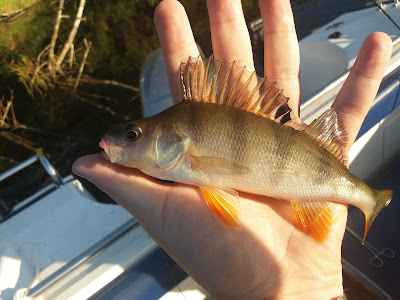 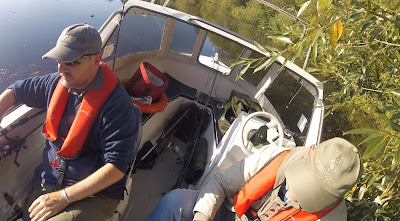 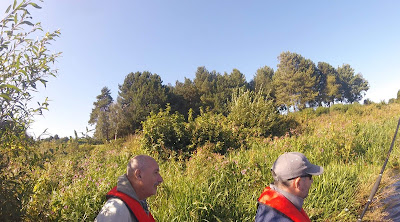 None of us saw the fish Ellis lost, but it fought like a big one, not sure how big and we will never know. We wondered how big as we headed for shore!! No one number sticks in my head though.......(Maybe...... just maybe!!)