Date fished 4/11/2022
8.45am until 2.30pm
My sister is coming up later today and staying for the weekend, so the chance of fishing is zero. I booked today off work and planned a river session. Ellis booked it off too, so we could make a day of it. Looking at the rain  during the week though, we called it off on Thursday. I decided to keep the day off and go to Tilcon, Ellis decided to keep the day off and play golf.
It was a cold start.

Getting the kids ready for school, we all left the house just after 8am. Three degrees the car said, as I headed to the lake.
I decided to just bring ledger gear, of course whilst fishing I concluded a float would have been better. I had worms and dead maggots for hook bait and some groundbait for the feeder.
I fished a swim I have never fished before, usually because someone is always in it. I took this as a good sign and tackled up.
I cast in and by 8.40am I was fishing. I waited.
I was now able to watch a pair of Kingfisher. They were enjoying the sunny but cold weather and fished and flitted about through the trees. They perched fairly close a few times and as my rod was motionless I paid more attention to them. I saw one dive into the lake and come up with quite a large fish, in comparison to the small but brightly coloured angler. I wished I had a camera. 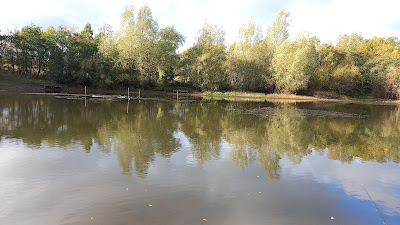 Soon it was time for my lunch. The time said 11 something, so definitely time! I ate in the sun and enjoyed the wildlife. Realising I was also here to catch fish, I upped my game. Well, not really, I just carried on. After lunch the knocks started. My first bite arriving at 12.23.
Now, I  was getting more bites, and eventually

No bigger than the kingfisher's catch.
The bites continued but no more fish were caught. Bream, tench, perch and roach were caught from the swim yesterday, but today I was not so lucky. Apparently worms are not doing the business at the moment. These fish are bloody fussy!
I hope Ellis had more luck with the bird related prizes over 18 holes. I will go back to complete my finger painting.
Posted by Adam C at 16:24:00