Today's trip was with a new friend. Mark invited me to fish a small syndicate water in Blyth. It was unusual to find a venue North of me, so I was really looking forward to giving it a fish! 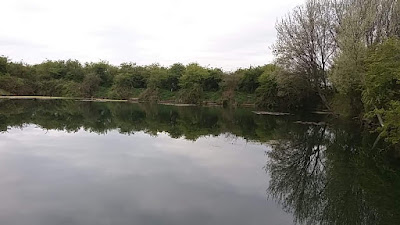 Mark had told me about some good Perch and Tench, so armed with maggots, worms and float tackle I set off.
Arriving at 7am to meet Mark, it was a short drive to the fishery. It is a small lake, about an acre, nearly perfectly square. Surrounded by trees, bushes and fields it is in a lovely setting. The lake is very weedy, although areas had been raked recently, we headed for those swims. I started in the corner, Mark in open water on the far side. 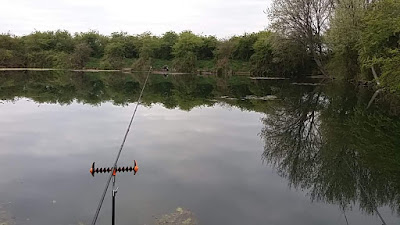 Soon my float was bobbing  and went under, I struck, feeling the fish go in to weed, I was stuck. This happened a few times, and soon I was mesmerized by small perch in front of me, swimming in the clear water. I went around the lake for some advice.

After a quick chat, I moved swims. Not far, just around the corner. Soon, the float was bobbing again and small perch came to hand.


Perch were now being caught regularly, fish were topping all around, the sun was coming out and everything was good with the world. A small bite, was met with a bit more pull than a perch, the Leeda Blue Diamond Specialist Float rod coupled with 4lb line quickly subdued a monster of a Tench.
Well, at least I had caught a Tench!! 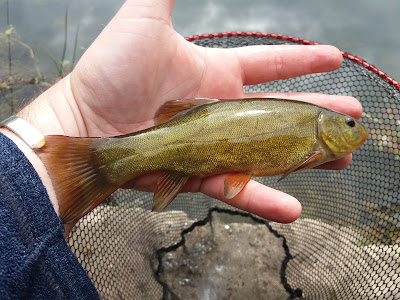 I was catching a few small perch, and as I was throwing a few maggots out in front, I kept seeing small perch and then big perch dart out from the darkness to intercept the maggots. This was going to be easy, I thought.
I shallowed up my rig and tried for the big Perch, It was so interesting to watch them in the clear water. They would attack the maggots, and mostly leave mine alone. I have never really believed in the " hook / bait balance" etc arguments, but it seemed these fish knew something was up and had no intention of taking the bait! 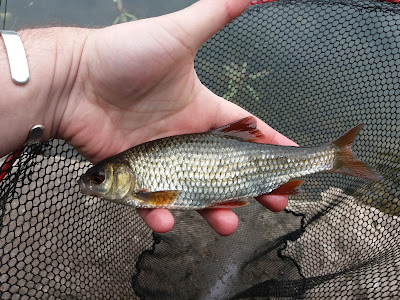 A nice Roach/ Rudd ( I still can't tell them apart) came later in the day, and the peace was then broken by some "youths". The lake being next to a public right of way, people had been coming and going most of the day, but these chaps wanted to shout in the swim next to me.
Mark as bailiff and or chief, was up and came round to chat with them.


He told them to be a bit more quiet, watch their language and gave them his mobile number! Mark is a proper bailiff! he talked to the kids. He didn't shout at them or tell them to go. He actually arranged for them to come back the next day and with some kit he could lend them, they could have a go at fishing! I am no Youth community leader, but the ethos of this club (Mark) with the local kids is brilliant. Am sure lots of clubs have many members of the mature kind, but its the next generation of anglers we need to keep clubs going.


Soon it was time to go, Line of duty was not going to be missed. Mark was staying till later, and we were both sure the Tench would feed. I have not heard from him, so am guessing they didn't!?


I am looking to join a local club, with a stillwater so I can fish it during the closed season and when the rivers are flooded. I will need to have a look at a few more in the area, to decide on location from work etc so I can do some evening sessions. I hope I pick one with a bailiff with as much future focus as Mark, it seems the baby Tench and baby people are the future!