The last few days have been red hot. This weather always makes me think of hot sunny days spent with Davey catching Carp after Carp on floating bread at Greenfields. There was little skill or finesse required, but the enjoyment levels were as high as the sun in the sky. After seeing the Carp at Tilcon taking surface baits on my last visit, I thought I would go back and specifically target them off the top. With only dog biscuits as bait, I arranged to meet Tom for an evening of 'enjoyment'.

I had brought my Korda Interceptor surface float, fresh from the packet and completely unused. Would I be able to christen this tool tonight?

A quick drive to the lake and we were ready to fish. We both set up for surface fishing and began firing some dog biscuits out. It was not long before the fish were taking them off the top. Bream and Carp were doing it. I love seeing a big pair of Carp lips taking a surface bait, but seeing the back of a Bream break the surface doing it is something else!

We both had action around our respective floats but no proper takes. Tom cast closer to the lillies and soon had a take. He played it expertly away from the lillies and a nice carp with a very small mouth was the reward. 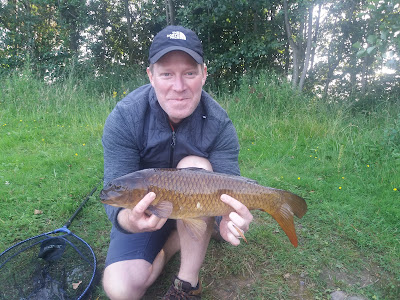 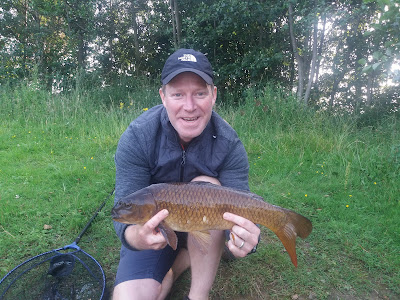 We kept firing out a few biscuits and apart from a few eaten by a Moorhen, the fish were all over them. Tom soon had another fish, but sadly lost it. Three seconds after losing it I felt the time was right to provide some constructive feedback/ criticism as to what went wrong. He explained a punch in the mouth was on offer!!

Unfortunately the fish snapped him up and as we saw Rupes controller float bobbing next to the lillies, it was nothing more than a reminder of the one that got away.

Tom tackled up with a hybrid feeder and I stayed with the surface fishing. Eventually I moved towards the lillies and waited. An eruption of water and my float sailed away. I had the fish and it was heading for the lillies. It made it in but a pull got it out, but at this point the hook came out and it was another that got away.

We fished until the float was just a silhouette and then decided to call it a night. A great trip and another first for Tom.

I will defo need to work on my delivery  about his end of year review! 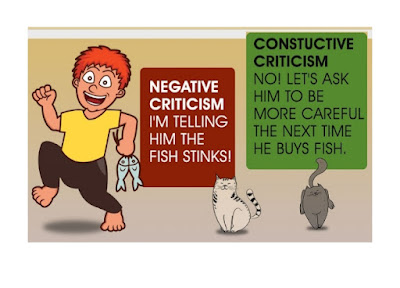