Date fished 3/1/2022
8am until 3.40pm
It's surprising but there are still club sections of the Tees I have not fished. There is always the old " stick to what you know" approach when sometimes it would be good to "try somewhere new". Today was one of those days, Ellis and I went to fish a "new" section of the Tees, albeit close to where we have fished before.
The river levels were predicted to be back to normal after it's New Year Eve exploits, and it seemed Ellis and I were too. We had decided to hedge our bets and each brought two rods. One for Pike and one for Chub. I brought the newly christened Korum Snapper Cult deadbait rod and the 7ft River ambush rod, perfect for Chub in tight, snaggy swims. 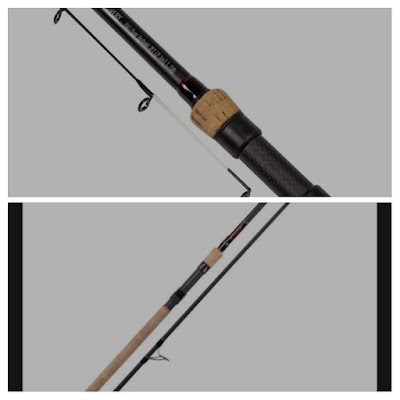 It was still mild, but colder weather was predicted.
What we were not expecting was the height of the river. With no further rain, the river had risen again. The banks were dry but the river full and rising. Not ideal conditions for short rods and not knowing the beat. We headed upstream to see if there were fishable swims. 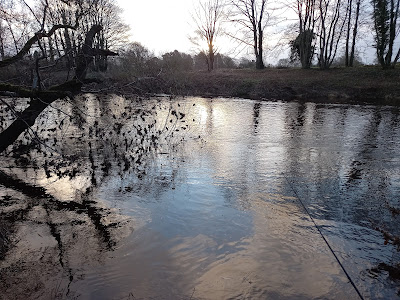 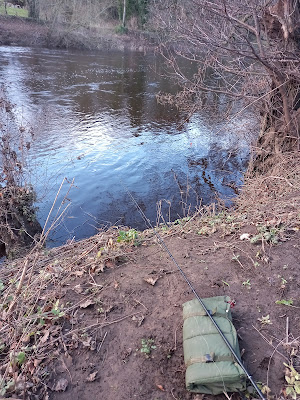 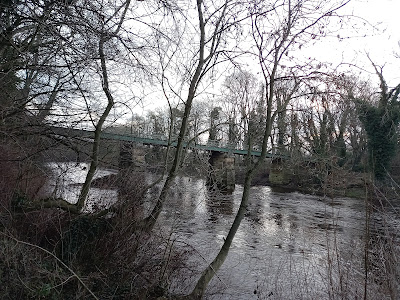 We had started at peg 62 and walked up a fair way. We fished around the 48 to 50 area. I walked a bit further and found the bridge at 45.
We found some swims and started to fish. I alternated between Pike and Chub gear whilst Ellis mainly targeted Chub.
A dog walker shouting to his dog, made Ellis come over to see what all the noise "I" was making! I told him it was not me as I had nothing to shout about!
Ellis divulging that he had missed a bite, re cast and hooked a Chub. He was just about to net it and it got snagged just in front of him and came off. This spurred me on, at least they were feeding! So I stopped taking photos and concentrated! 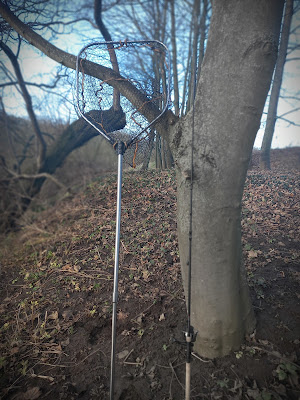 After a while of no bites and snagged in the bush, I walked and joined Ellis. I set up my rod again and thought I would poach one from his swim as he was still getting bites. I got into position and promptly cast into the tree!!
I tackled up again, and then sat and ate my lunch and chatted. I knew I was beaten.
I declared to Ellis there would be no snow today, far too warm.
After a while, we headed back downstream to see if we over looked some swims on our march upstream. We found a couple of promising swims right where we started. It's amazing how the river does not look as fast after a few hours of looking at it. I guess your eyes get accustomed to the movement. Anyway, we fished here, and a strange eruption when Ellis threw in some old bait, the only notable comment.
Ellis then left as its Carole's Birthday - Happy birthday!!
I fished on. I walked downstream to the low 70's and was soon at where Ellis hooked the (Barbel) Pike in the Autumn. It was not fishable today, so I turned around and headed back. I stopped in a good little swim and took stock of the tackle. I could not fish with the short rod, and it was unlikely there would be any Pike swims. So, I changed things around and was soon ledgering meat on a 3.25 tc Pike rod. Perfect!!
No self respecting Chub would fall for this crude method, and none did. I ended up in peg 62 for 20 mins just because I thought it would make a great story when I caught in there even after we walked away from it first thing.
Sadly, that didn't happen either! Seems I can't predict that!
I have just got home, came via the A68, was OK until the heavy snow at the end. Seems my predictions were wrong on that too! 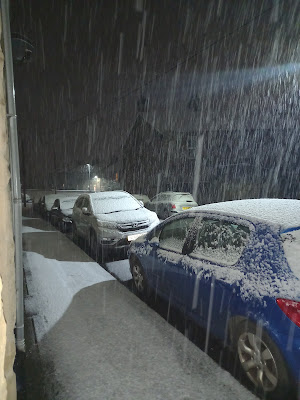