An evening session on Tilcon was planned, albeit "do the same as last time".

I finished work (in the office) and headed straight to the lake, its on the way home so an ideal location for after work sessions. The weather had been scorchio, surface fishing weather, but as above I was going to float fish sweetcorn again.

There was an angler in the peg I was going to fish, he was just finishing up and offered me the swim. I decided to fish one to the left, a swim I hadn't done well in before. I thought today may be different.

I set the float to depth and started to fish. On every cast the corn was grabbed as it fell through the water. The fish were clearly up in the water, I put on my poloaroids and could see the fish just under the surface. I shallowed the rig and fished on. I caught a few roach but really I wanted the bream, on the deck and feeding. I put some pellets and corn in so hopefully they would follow it down to the bottom.

I hooked a bigger fish, it was either a bream or a tench as it actually looked like a brown tench!! We will never know as it rolled and the hook came out. I fished on and was soon on a good few roach. The number of missed bites was massive though, it was like the fish were just grabbing  at the corn.

I watched a crow have an argument with a heron, I think the heron won as it was soon fishing on the bank opposite me. Eventually a bigger fish came along, no messing this time and it was netted. I barely removed it from the water to take its picture and it was soon swimming away. 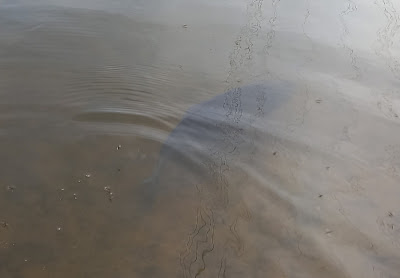 As the gulls dived into the water to catch fish, the wind picked up and I decided to call it a day. I ended with the one bream and about 20 roach and ide with one skimmer! Not bad for a short four hours after work, once I got the fish feeding where I wanted them to. Clearly once caught they had other ideas about feeding!!