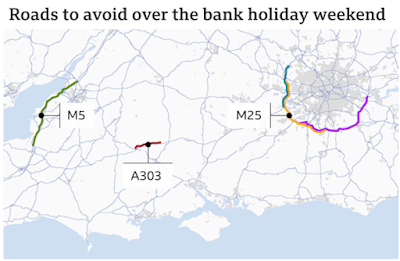 As the above showed nothing relating to Hexham to Ryton (not including County show traffic on Friday) I was free to get in the car and travel the 17.6 miles to the lake.
Fishing a bank Holiday that wasn't a Monday was still confusing, but Liz said it was fine so Thursday and Friday it was to be. I was enjoying the float fishing so much, I decided not to change anything today. The float rod, sweetcorn and some micro pellets my companions for this trip.
The weather was supposed to change, it had been on and off rain since the weekend, but with warmer, sunny weather forecast I went early morning to be finished by early afternoon. A match was scheduled for the evening too, so I wanted to be out of their way.
I arrived at 6am and another angler was in the swim I was going to fish, not to be deterred I went round the other side of the lake and fished Tom's corner. It was only five degrees when I had left the house, but now the car said eight, I hoped it would get warmer, although not by too much as I had no sun cream with me.

I fed some corn and pellets and started to fish. Plenty of bites and fish showing but nothing was being caught by me as yet.  An angler opposite caught a bream but still I was blanking.
After two hours the float buried and I struck, this time the fish was hooked. It went straight into the lillies, the drag giving line as a powerful fish kept swimming. The five pound mainline to three pound hooklink meant I played it carefully. Soon, the fish was out in the open and again I played it carefully, I was hoping to see a big green tench. I got it in the net, and eager crossword participants amongst you will already know what it is!?
My first Carp from Tilcon, and a 5lb 10oz blank saver. 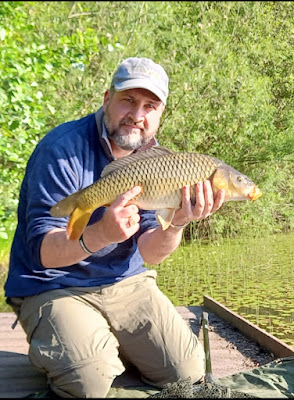 Thanks to Nick, who took the pictures whilst he was setting up in the next swim!
The remainder of the session brought the usual suspects:
A Perch caught on sweetcorn

Yes, you read it right. After some fierce sun which was clearly cooking my arms, it started to rain. A good 10 minutes of coolness but the blue sky soon returned.
By the time the cricket started, I was in a steady routine of catching and soon had a good (metaphoric) net full.

This day was getting even more unusual, England had taken six wickets by the time I left. There was nothing crap about this session, I just love a (not) difficult anagram.
Posted by Adam C at 14:24:00