Traditions continued today, I have fished opening day (or close to it) for the last several years. Ellis and I booked a couple of days off work and we headed to the river (s).

As last year we started on the Swale and then Tees the day after, this year we thought we would flip the alphabetical approach and start with T. We met at the tackle shop (both getting the right place today) and bought some bits, mostly bait aka £30!

We drove to a stretch of river that we had fished once before, we caught then, so no reason why today would be different.

We walked (downhill) to the river, already knowing it would be uphill later in the day. I decided it was too hot for waders, but carried them just incase I needed them later. I know what we did need.. 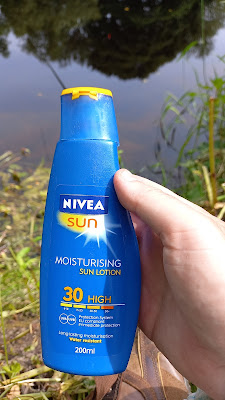 Fortunately, what greeted us were some pegs! There had been some serious cutting going on, swims were cut out, steps dug, it was  convenient not to have to do this prior to fishing. We started in a double swim and chatted as we trotted maggots over and over.

Chublets were the first to be caught, they stayed with us most of the day. With so many chublets around I was wondering where all the Chub are!?

Ellis was first to need the net, a spirited Perch pulling very strongly back. Soon the float was under more than floating and the fish were welcome. At 11am, I declared I was starving! So by ten past we stopped fishing and ate our lunch.

We headed upstream to find new swims. We found two separate swims. I carried on trotting and Ellis sat back and fished the maggot feeder. It was a smart move, as the fish of the day came quickly to this method. 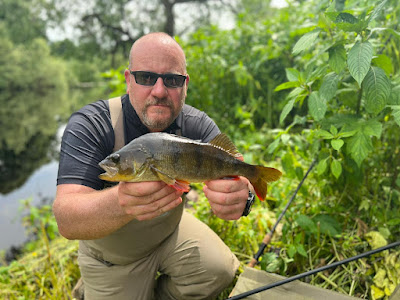 In my swim, I was yet to catch a Perch. It was still chublets, but I did manage some other silver species.

One small chublet was returned straight into a waiting pike. It wasn't until the splash, I saw the pike grab the chublet and swim off with it in it's mouth.
Some other anglers had finished for the day, so we decided to fish between the two areas we had fished up to now. We waded in the river, which was nice and cool and Ellis was soon opposite our first swim. He was stood where we had been casting earlier, but this time looking back from the water.

I was walking slowly and fascinated by the rising fish all around. I manged a Perch of my own whilst Ellis continued with chublets and a grayling. 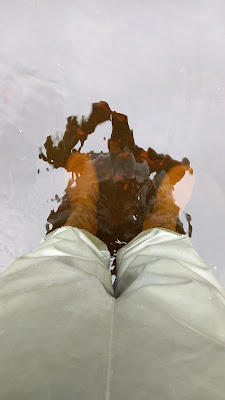 Afternoon turned into evening and the river was alive with fish. It was however, time to head back to Ellis's for some dinner. We just had to contend with the tour de Darlington on the way home!

Of course Ellis has caught cracking Perch before, his pb is 1lb 10 oz. So what's his "new perch" about?