The parents are up, the offspring has had a birthday. This can only mean one thing,  a family fishing trip.

Martha was singing in Carlisle with the choir, so birthday boy suggested we go to Wydon Water in Hexham to see if we could catch another tench. Rupe, Davey and myself were fishing, mother was spectating. 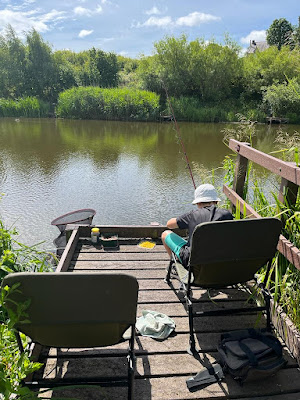 We settled on 1 point for a roach or rudd, 7 for a bream and 10 for a tench.  Although I think we lost count of the one pointers! The rudd were certainly hungry and active. We caught alot (estimated at a billion!) of them in the 5 hour session. 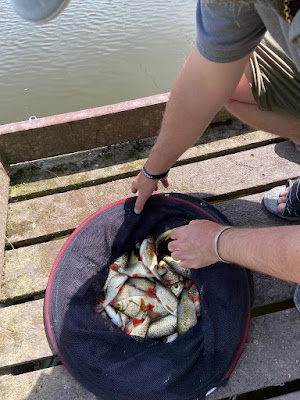 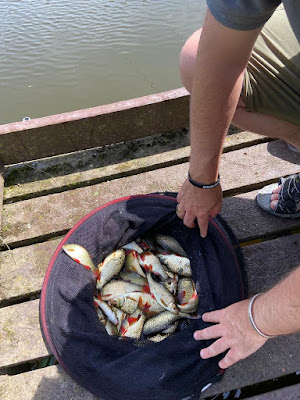 Rupe was into fish first, his float not even settling before a rudd took the sweetcorn on the drop. This was to happen many more times. I started on the hybrid feeder so I could assist with the float fishing champion.

My parents soon arrived, having dropped Martha at the Abbey. Davey was soon catching rudd too, but quickly hooked something that was not a small fish. A lovely tench of about a pound soon in the net. This was modelled by his favourite northern grandson. 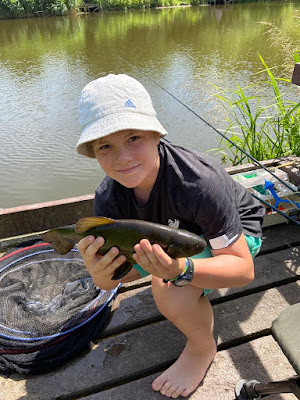 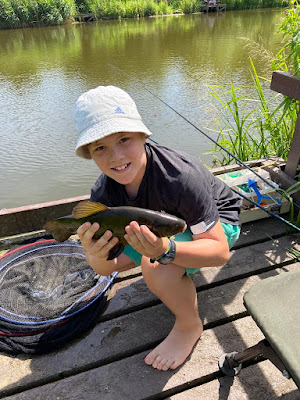 Rupe continued to catch rudd. And soon overtook Davey even though he had caught a ten pointer. I was still on 3 so completely out of the race, maybe that's why we scrapped it before the end!

We stopped for lunch and all sat together and had a mini picnic. The star of the show was not my egg sarnies, nor homemade brownies but the 5 litres of water I brought!!

Back to the fishing, we waited to see if the tench bubbles that were fizzing around Rupes float materialised. It was here that he uttered the phrase, " my float is getting some a-tench-tion. I have no idea where he gets this language from?!? Even when a while later he was in a right tangle he came out with "is it really buggered dad"!? Haha, I blame the parent (s).

Suddenly my rod swept around and the spool started to spin. This was no rudd. I played the fish that was over the other side of the lake and then up in Daveys swim, and Rupe expertly netted it. A nice tench of around 3lb, again modelled by myself and my favourite son. 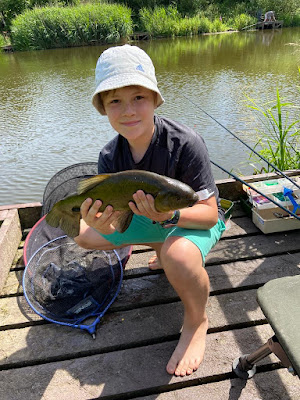 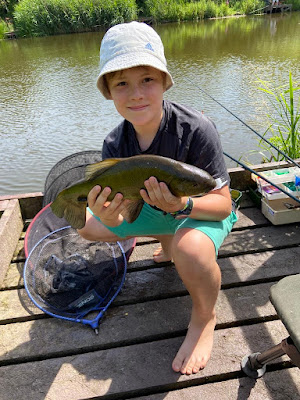 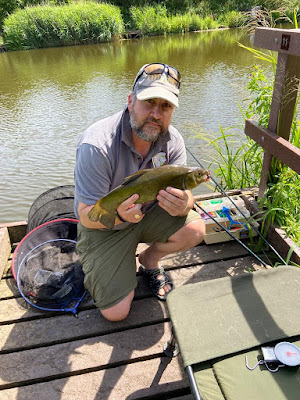 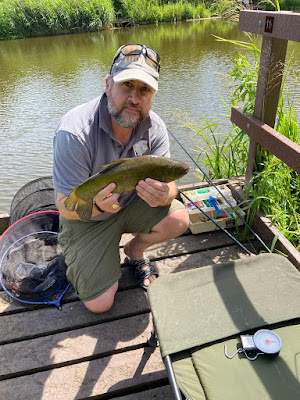 We left mid afternoon as it was getting red hot. I think the sun had affected my head as I clearly thought a 3lb tench was going to break my pb, which is 5lb 4oz. Seems daddy wanted to get all the a-tench-tion!!