Today's trip was very different. I don't think I have ever done this before, except when on family holidays as a child in Devon and the fishing was on site. My friend, Duncan and I once cycled to a lake in Binfield, where we grew up and fished but I had never walked to the fishing venue, until today.

I got up early as the warm weather was still with us, I believe it is peaking this weekend, early next. Many rivers/clubs have closed to fishing as their water levels are so low and oxygen levels are depleted. I decided to therefore stay local, fish a relatively deep lake and combine it with my first ever pedestrianised fishing trip.

Now, I usually say I am going to fish light, but given I was walking from home, I went even lighter. I had light mayonnaise in my egg sarnie! Armed with leftover bait from my last trip, a 7ft ledger rod and some bits I set off up the hill to the lake. It's not particularly far, but a grin like a Cheshire cat kept me company on my stroll. 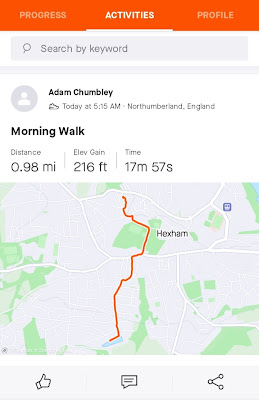 Less than a mile from door to swim, arriving at the lake, I opted for the swim Davey was in last week, it was one to the right of Rupe's and my swim. I like this side of the lake, and tend to fish in this area when I come.

Instead of doing twizzles, I found some feeder booms that I used to use all the time. I had forgotten I had them, I think they work perfectly.

I cast to a spot I had thrown a couple of handfuls of feed and waited. I was hoping to catch an early tench wanting a breakfast. I was only successful in catching a hungry Adam with my homemade flat sausage muffin!

There was plenty of bubbles and fizzing in the spot, the fish were feeding. I cast to the same spot and got plenty of knocks. It was not until 7.30am that the rod was pulled round and a fish was on. I played it away from the spot, it went towards the reeds and the barbless hook came out. I was left with some slime up the line and cursing that the short rod was not ideal in these swims. I rebaited and cast back in.

An hour later the rod was off again, this time I won the battle and tench number one lay in the net. 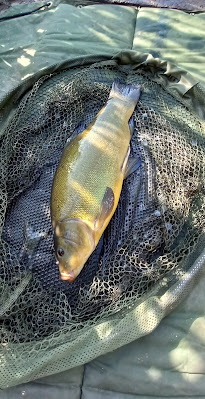 The next two hours brought three more tench and no more lost takes. So, it seems the short rod was more than able to deal with the reeds either side of the swim.

The next few casts were met with fish taking the bait on the drop. I get that with a float as the bait falls slowly, but never understand how a fish can take a bait sinking quickly with a ledger weight attached, but they do! Well, the rudd do.
On my next cast, the rod was away as soon as the bait hit the deck. This was no rudd though and the fish was away around the lake. I brought it back and it was soon in the net. My fourth tench of the morning.
As the sun came round to directly in front, I kept applying suncream to my knees. The bait box was soon empty and the only bit of corn was on the hook. A sharp pull of the rod was missed and I took this as a sign to get on my bike (metaphorically).
I walked back through Hexham with the rod and net made up. I got a few comments from passers by, most notably from an older man wishing me luck on my trip.
I informed him I had caught 4 tench and was on my walk home!
He laughed saying " You talk the talk and walk the walk!"
Posted by Adam C at 11:37:00