Six anglers (five spectators) descended on Potwell fishery in Broadwindsor for our annual family fishing trip. Our holiday had already been fish related when the Dawson's moved house and I was asked to "catch" the fish from the pond. Just a small net was needed, unfortunately!

The three Northern Chumbleys, one Southern, the eldest Dawson child and his mate Stan were the anglers. Plenty of pellets, sweetcorn and some stale cheese scones that were crumbed filled the bait boxes, whilst float rods, ledger rods and a 4m whip was the tackle.

Rupe started on the ledger whilst I set up float rods for the others. A quiet start but as the hour approached, Rupes rod whipped around and the spool started spinning. Rupe played the fish to the net and the net was soon full. A 5 lb common carp the first fish of the day. 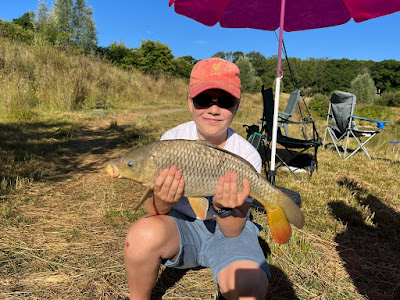 Several small roach then took a liking to the sweetcorn and soon the anglers were getting a good few lightening fast bites, most were missed though. Stan then arrived, he had never fished before and was keen to learn. I had not started to fish yet and became "teacher" to set Stan up. He was soon casting with great accuracy and feeding too. The fish, not himself, he didn't eat until he caught! More to come on that.

Sam was getting lots of bites and I was jumping between the kids as each called louder than the last. ( Reminds me of a game we used to play at school). Sam connected with a bite and caught his first fish, he allowed his brother to hold it too.

Finally Stan caught a roach, but it came off whilst we were landing it. We would of called that his first ever fish, but we hoped more was to come!

Lunch was started about 10am and Eddie helped to polish off everything on offer! Hats were very much needed today, even under parasols. The hats were swapped about and soon I was wearing Martha's. But not until after she had caught her first fish of the day, she actually did it all on her own. 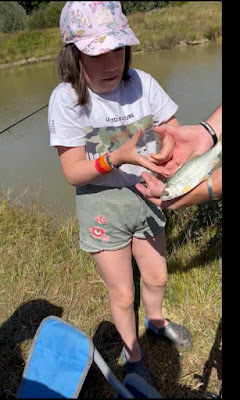 As the morning turned to afternoon, we fished on. Stan stayed in his spot and kept up the feeding. He was soon rewarded as his float sailed away, this was no roach. He played it well and after a few long runs from the carp it was soon ready for the net. Stan played it over the waiting net as Rupe held it steady.

We weighed this fish, a lovely mirror carp of 7lb 4oz. 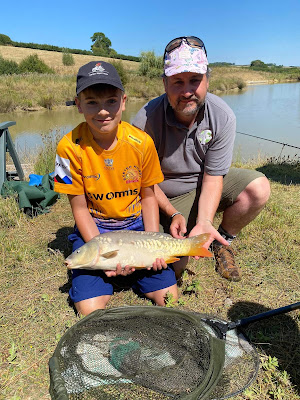 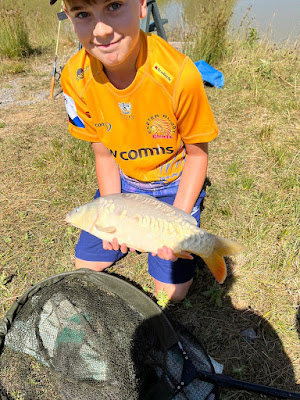 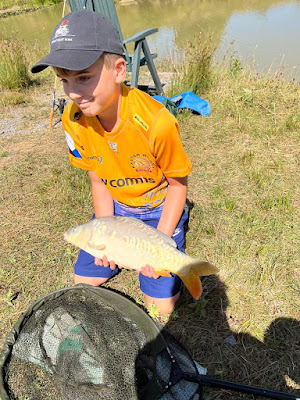 Stan was now able to eat his lunch! Everyone had caught something except me by now and as our numbers dwindled to go visit the horses, I got a go with the ledger rod. I needn't of bothered, the early afternoon temperature was boiling and we decided to call it a day. Technically I blanked, albeit I only fished for less than an hour during the hottest part of the day, that's my excuse!

Call it beginners luck, I call it skill and persistence. Stan was patient and kept casting and feeding in the same spot. We never got round to using the whip, maybe I was too scared to try. Stan had already given me a whiping with the rod, I didn't wanna be shown up anymore!!