I am in several Fishing groups on Facebook that cover my fishing; Tees group, Swale group, Pike group and Barbel group to name a few. You will know from reading my blog, I am happy to share info with people and I like to ask questions too.


It was in one such group that I put a distress call out saying I had never caught a Grayling, (you will note from my what type of fisherman am I post?) and would love to try and catch one this winter.


Two guys answered me, Dave and Ellis, who I had chatted with before but never met, saying they knew a spot and would take me out that weekend!! It was a great response. I was excited to try and catch a Grayling and pleased to be meeting some new like minded anglers.


We arranged to fish the Tees at Piercebridge the following Sunday. I would be trotting maggots, something I have not done too much and they would be using fly gear. I got my bait on Friday after work and needed to keep them for Sunday, a few box changes and cleaning was required which definitely got me into the mood for Sunday.


We met at 8am and the wind would have had to warm up a bit to be described as "bitter", it was freezing!! We tackled up and were ready to hit the river. We were going to be wading and fishing spots going downstream then work our way back. Immediately I loved the wading, its not a method I have done a huge amount, I waded once in the Kennet a good few years ago and had to duck ( no pun intended) so a swan could take off, it appears I was stood slap bang in the middle of the runway! 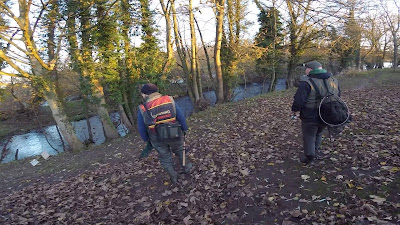 Stood a third of the way out, throwing a few maggots in and trotting a heavy chubber style float down the current was perfect. I enjoyed the "trying" to catch which is different with a trotted float than siting behind a ledgered bait.


As we moved down river, I was at the front and Ellis was at the back, a bit further down Dave had told me Ellis had caught the first Grayling. I had missed it. Was this to be the only fish of the day and I missed even seeing the lady of the stream? 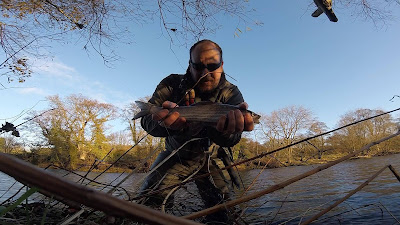 We moved on. Deeper pools, shallow glides and then rapids! the river had it all. We stayed at a deeper pool for a while as we all decided it looked good. I walked a way down as we could not all fish it at once, when I returned Dave had just caught a fish! 0 from 2, was I ever going to see a Grayling?


It was my turn, the guys let me in the swim as clearly the fish were there. A few trots down and the float buried, I stuck into the fish, fish on. In this current playing a fish is an awesome feeling, you are taking on the fish and the river it seems. Ellis came out with his custom net and netted the most spectacularly looking....... Brown Trout I have seen! 0 from 3 - was I ever etc etc? 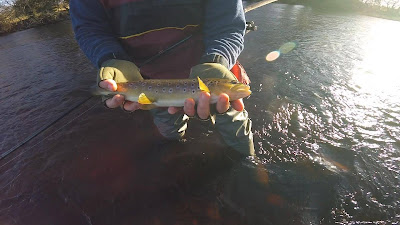 I continued in this swim for a while, no fish, so then we walked back up stream.  A few more swims and no Grayling. We were near to where we started now, so again went in search for the fish. Dave and I waded out and begun to cast out. Dave struck into a fish, it was a good size fish, his rod bending over then disaster the hook pulled. Suddenly my float went under, I was in. ping, same out come as Dave.


We carried on fishing in the same spot with Ellis joining in and in 30 mins must have had 8 Grayling between us. I had done it!! caught my first, second and third Grayling. Tried and targeted. It was great. My third being a good sized fish of about a pound. 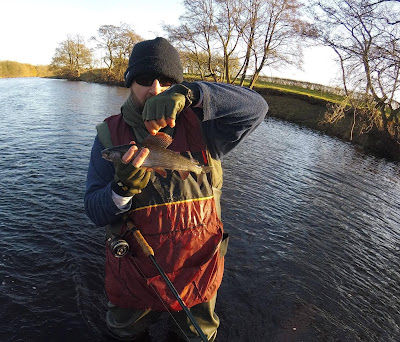 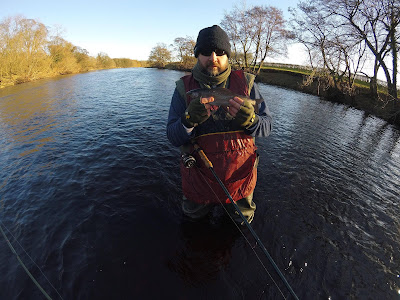 The float had buried, I struck it was all text book.


I  must admit I really enjoyed the trotting and dare I say it catching 4 smaller fish over the course of the day gave me a good appreciation of targeting these fish with maggots and not sitting behind my feeders or dead baits all day.


Thanks for the images, all expertly caught on Ellis's GoPro including this one of his fish, worth the wet cap!! 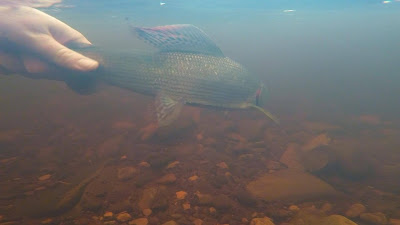 As we walked back to the car and Dave warmed up, we decided we would go out again. This fishing is great, ladies of the stream and new friends all in one day.