Date fished 22/6/2022
6am until 12pm
I have always wanted to catch some proper river slabs. Spurred on by recent Facebook posts, I decided on a groundbait feeder and maggot approach on the Tees (Again).

It was clearly easy. I just had to get the groundbait into the river. The packet said it would do the rest. It would pull, assume by the tail and hold fishes in the swim, again assume by some sort of double arm around the shoulders approach for a long period of time. Simples.
I was also using a technique I had never tried before. I had researched, practiced and tied a twizzled boom. I don't consider myself an expert, if anything I tend to use my old faithful tried and tested methods. But sometimes its nice to keep up with the times!
I decided to fish at the most downstream part ( minus boat fishing) that I tend to fish. It is 14.5 miles as the crow flies or 18.4 miles in the car from the most upstream section I fish. I tried to find an app that would measure the river distance. I could only get Google to do it on American rivers, so I will get some string and a ruler and let you know. 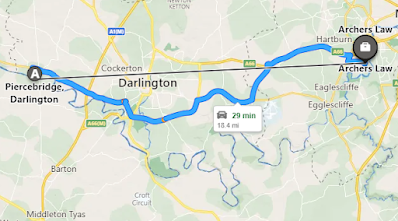 I set off early as it was going to be warm (it was 25 degrees when I packed up at midday). That was warm enough, fishing with no shade I was ready to cool off.
I parked up and walked to the river. I decided to fish a swim I had fished before. Peg 127 the chosen spot, 30 turns of the reel the chosen distance.

I clipped up and cast in four feeders of groundbait. It smelt amazing, if the fish didn't like it, I was certainly considering having some with my lunch!
I was casting every 10 minutes to get some bait down. There was a bush on the far bank I was aiming at and honestly only two casts in six hours were wayward of that line. Eventually an indication, I struck and the blank saver came in. I put it straight back. I wanted a keep net "full" today but aware of how hot it was, I thought if I caught a few bream I would put in the keep net for no more than half an hour, do a catch shot and then let them go. Any further bream I would just remember. That was the theory.

A perch twice the size of the above roach came next. This one was returned with no picture. I was getting lots of bites now too.  Then the rod pulled and kept pulling, this was a stronger fish. It felt bigger. I played it to towards me, I then saw a tiny head. How did this fish pull so hard?! Then I saw the rest of it's snake like body.

I had only ever had bad experiences with deep hooked eels caught in the past. Having to cut the line and release. This one however was hooked just on the lip, I easily unhooked it and set it back on it's way.
The next 30 mins was a blur. I caught four fish in as many casts, it was like a bream typhoon going through my swim. It definitely felt like a shoal arrived. Good solid bites, all exactly as the text book would describe. It was like I was a proper angler!

After the quick photo, they were all released. Probably no more than 40 mins from first catch to final release. It was a crazy spell.
With the sun now blazing overhead, I moved my chair into the shade, I could not fish from this angle but I could sit and eat my lunch. It seems bugs were on the menu for all today!
After my food, I got back to the fishing. Another two perch followed, then the rod got ripped off the rest and the drag spun. I honestly thought I had hooked something massive. The rod was bent over, line being pulled. I managed to get it back my way, and up popped another small head. Eel number two. What must a 6lb'er fight like!?
This one was also lip hooked. I unhooked it and away it went. Amazing to have caught two like this, all my previous eels on numerous baits had always completely swallowed the lot.
The dead maggots I was using had been frozen on Friday evening. I got home from the Swale about 6pm, put them in a plastic bag straight in the freezer and forgot about them. I got them out the freezer at 4.30am this morning. It wasn't until I was sat watching the rod and I saw movement out the corner of my eye, that something troubled me. I had either invented a new super bug, or something strange had happened!?!
I put two of the reincarnated maggots on the hook and promptly caught a little dace. Maybe I should of given them a second chance, oh well. The rest are back in the freezer!!
Posted by Adam C at 14:28:00