The parental unit had been up North, North of here in fact, visiting the Northumberland coast. On their leisurely meander back South they stopped by to eat my food and drink my wine. I tolerated this and even took Davey to fish my club water at Ryton. We targeted bream on Tilcon.

Float rods, worms, sweetcorn, some loose feed and with pellets and a ledger rod as back up, and we were set. Day ticket bought we arrived at the lake.

We set up in adjacent swims and started fishing. The wind was quite strong but when the sun broke through the clouds, it warmed us up.

A quick dip of the float and a small perch was first to banked. This was followed by a few more, all coming to worm.

The ledger (sleeper) rod was next to show signs of activity. Just as I was having a cup of coffee, it pulled round and I knew I was hooked into a carp. I played it away from the lillies and eventually it was ready for the net. At 6lb 2oz, it was my largest Tilcon carp.

We fished on and it was the ledger rod away again. I was hoping for a bream, but a nice little tench was the culprit this time. Some excellent photography from Davey, he managed both mine and the fishes head in the same picture (ish)!

Davey was soon catching fish, the switch from sweetcorn to worm brought three perch.  I called him over to fish the swim I was in. I was just ledgering now so there was space for both of us. Plus, I could berate and tell him off easier if he was closer. He was soon casting well and feeding close to the lillies. His float buried and he hooked a carp. The battle on the float rod was quick as the hooklink quickly gave way. Was this the story of the one that got away? 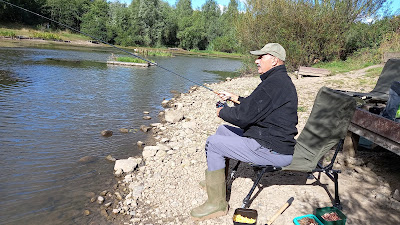 I too lost a fish. Some weed drifted against my line. I saw it, but left it as I thought it would be fine. Moments later my rod pulled round and a fish was on. I couldn't play it with the weed attached too, and another one got away!

Davey kept up the feeding and accurate casting, and soon his float sailed away. He struck and quickly declared "a better fish".

Before I could offer guidance on the fighting carp, we both saw the bream pop to the surface. I had 'promised' Davey a pb, 4lb bream, so was careful with the net. He guided it over the net and it was ours. Smiles all round.

This prompted us to pack up. Leave on a high. On the short drive home Davey remarked how "the slab saved the day"!